Seeing as we were talking about laces, I thought I'd show you this.

Do you think it's clever? Witty? Or incredibly naff and tasteless? 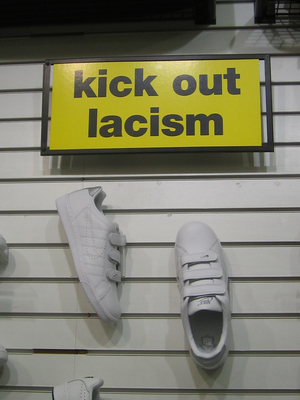 As featured on the BBC 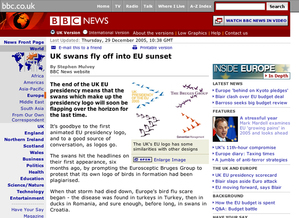 The nice people at the BBC News website have quoted from this blog, which is very kind.

They were commenting on the UK's EU Presidency logo and they referred to my posting back in July. 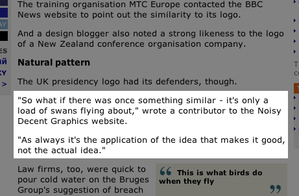 So, if you've come from that BBC article; Welcome, let me show you around.

This blog is about Graphic Design. You won't find musings about the wife, husband, kids or dog. Just Graphic Design. I work in London, so it's kinda Londoncentric although I get to travel regularly.

As I believe that Graphic Design is all about ideas, you'll find more than just analysis of fonts and stuff, although there is plenty of that.

I hope you enjoy reading, and feel free to leave comments. I love that. 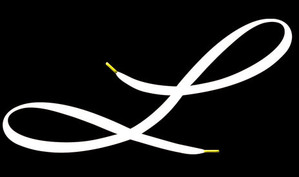 This is nice, simple, good. A logo for Laces which is “New York's very first all-female sneaker boutique.” Nice touch on the L. No idea who it’s by unfortunately. 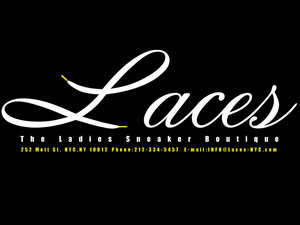 An even more interesting thng to write above a shop. 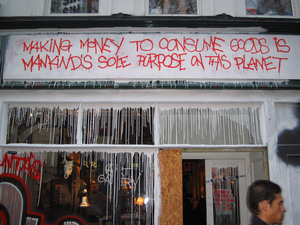 WCRS have a graphic design off shoot called Dave.

On his birthday, a brand question. Who should sue for copyright infringement? Kelloggs or Jesus? 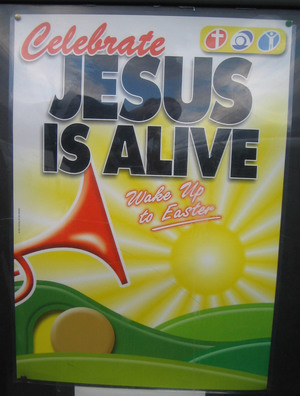 PS This is a timed post, I'm not writing it on Christmas Day, don't worry.

Santa Claus is leaving his bag all over town

This is an ad on the Tube. Nice simple idea, fits nicely into the Christmas theme without being too tacky, nicely shot. Well done. 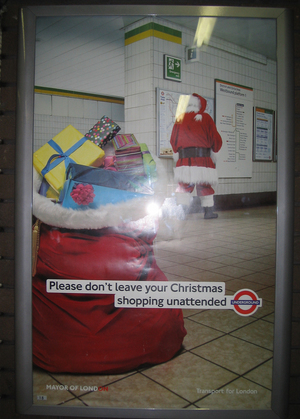 "It's just boring old us"

I had a completely scandalous lunch yesterday with a client who works for a fantastic, incredibly trendy brand. It never fails to amaze me how everyone thinks their brand is boring and stuffy – even the people who work for for really cool ones.

This particular client works for a brand that most people would envy, but they still perceive the brand as being unimaginative and corporate. Is this just an English thing? Is this a branding problem? Is it a political thing? 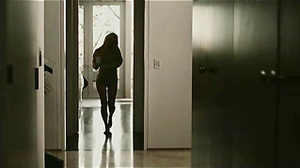 Good article in The Indy about Kate Moss' comeback and how textbook it was. I agree totally. It was been handled like an ABC of How To Save A Brand. And it's worked brilliantly.

It's almost as if she planned it.

A friend and I were talking about this recently - did she plan it all? Well, consider these points:

1. She looks great in those pictures.
Even though they are grainy, mobile phone shots, she still looks very glamourous and sexy. I bet most celebrities don't look that good after a hard night out.

2. It has done her image no harm whatsoever.
And it probably never would have. She always been a rock 'n' roll model and her fan base don't see cocaine as a big deal. Look at Ozzy, look at Liam and Noel.

3. She can't model forever.
She's already worked longer than most models, but one day she'll have to stop. And where does her career go then? Maybe she needed something that gave her a little more personality, more vulnerability, so she can present or write or something. After all Britain loves a comeback, see Robbie Williams & David Beckham.

Was it a careful manipulated publicity stunt? Stranger things have happened. What do you think? Whilst you're thinking have a look at her comeback ad for Virgin Mobile, it's great. What on earth are they doing here?

"the longer you sleep, the harder it is to wake up"

"Have you ever noticed how sometimes, the longer you sleep, the harder it is to wake up? Life is the same way."

As told by Gil Hildebrand on his blog. Gil works at Squidoo, Squidoo was set up by Seth, and our good friend Russell has been trying it out. 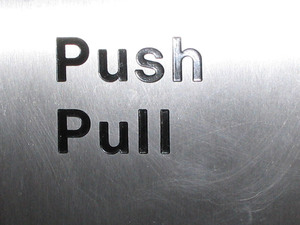 This is the first in an occasional series.

There is a branding company called Nude Brand Creation. What a ridiculous name.

What on Earth are we doing? 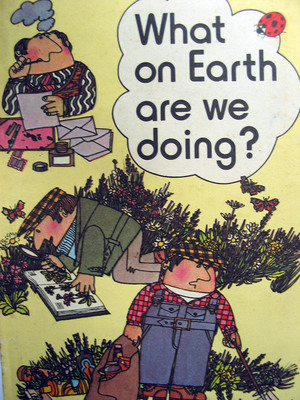 This is quite simply the best title of a book ever.

It’s an old Ladybird book. We’ve started collecting these in the office. They are hilarious, surprising, charming and brilliant all at the same time.

If I ever write a management book, it will be called "What on earth are we doing?".

A few months ago Penguin Books launched a Podcast service. This Christmas they are are offering free downloads of the classic tale, Dickens's A Christmas Carol. It will be read by read by Geoffrey Palmer, in five instalments. the first one is available now and the others will be available on the 16, 19, 20 and 21 December.

I think this is a great innovation from a once great, now good, company. I hope this sort of stuff helps them become great again.

The Dreams of Power

Wieden + Kennedy London have a blog. And it's OK. Well it's better than OK actually, but as it's a blog by an advertising agency I expect a bit more. That's all.

Anyway, I digress. They are behind all the recent, brilliant Honda adverts. You know, Cog and Hate Something and the other ones . I like Wieden + Kennedy, I like their approach and I like their work. I love the Honda ads, about bloody time a car manufacturer did something like that. 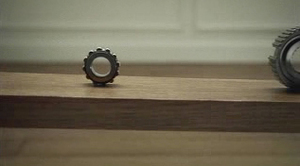 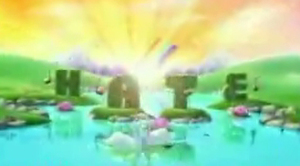 But now they have a new ad. And I don't like it very much. The whole world, especially these people and Stefano Hatfield love it. They think it's better than the others. But I don't. The cog ad ended with the line, "Isn't it nice when things just work". That ad was beautiful, a work of amazing craft. It got across the message that Honda's are beautifully crafted vehicles. We care about this car so much we made a beautiful ad like this.

I could be wrong. What do you reckon?

(Still, it's better than all the other car ads around at the moment.)

Paul Arden is the ex Executive Creative Director of Saatchi & Saatchi. He's written a book. The book is called "It's Not How Good You Are It's How Good You Want To Be". 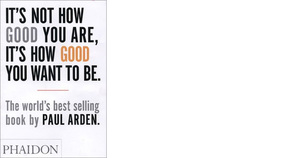 I think it's brilliant. It's pretty much the bible at work - every new employee is given a copy.

It's about ideas, and challenging yourself and pushing yourself to have better ideas. If you hate these kind of books this one is laid out very visually so it's really easy to read or to dip in and out of. It's well structured and features simple nuggets like the ones I've included below.

Buy it from Amazon now.

Don't put your own cleverness in front of the communication
Do not try and justify your salary with witty ideas. Cleverness is simplicity. The issue itself is often the message.

Do not covert your ideas
Give away everything and more will come back to you. They are not your ideas anyway they are God's.
(Seth Godin also talks about this "Unleashing the Ideavirus".)

When the client won't buy, do it his way, then do it your way
Very often having given him what he wants he will give you what you want. There is also the possibility he may be right.
(We do this all the time at work, and it's soo effective.)

Seth Godin was interviewed by the excellent chaps at e-consultancy the other day. In his predictions for 2006 he says, "Several large marketers cease to do TV".

The TV ad isn't dead, it isn't even dying but clever brands (or rather clever people inside brands) are realising there are other ways to reach customers. Way that means you don't have to use TV any more. You can still use it. But you don't have to.

And that's the big difference.

Oooh, I might write some predictions of my own...

That's not my brand! 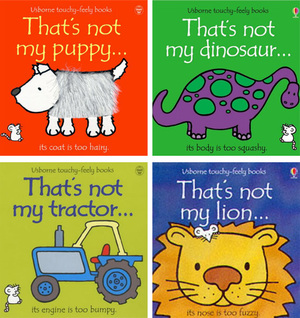 I've had a lot to do with these books over the last couple of months (for one reason or another).

And I love them. They are beautifully designed, with bold simple shapes and colours and fantastic touchy feely bits for the little ones. They are, after all, aimed at babies.

But what I like best is the simplicity of the idea.

The books are called, "That's not my insert subject here". And inside the story works like this;

etc etc and then they end

That's my puppy! It's coat is so cuddly.

You get the idea.

And today I've been thinking about using this idea in presentations.

Can you guys see that working? Thoughts? Comments? Opinions? I've been writing this blog for about 6 months now, so I thought I'd change the design a little bit.

I've always tried to keep the design as simple as posssible, and with that in mind I've removed the third column. It always annoyed me.

I've added RSS feeds to Russell Davies, Seth Godin and Brand Republic. I'll try and add more when I find (or remember) site that are worthy enough to be featured. I promise I'll only feature sites that I read regularly and I believe will add something to your day.

I've added links too. There won't be the quality control that there is with the RSS stuff I'm afraid, but there will still be some interesting stuff there.