What makes a good viral?

We do lots of virals here. We've even won awards for them.

Clients quite often want a viral campaign. If they ask for one and they haven't had one before we normally tell them 3 golden rules. I'd like to share them with you.

1. A viral is not a video that gets emailed round.
Technically that could be a viral, but starting from that point isn't viral.

A true viral campaign is an idea that has a life of its own and spreads in the same way a virus does, prolifically and exponentially. Email is an obvious way to do this, but it doesn't have to be email it just has to spread. Take Google for example, it spread virally - yes word of mouth, yes email, yes PR etc.

Rude - the trick here is to do stuff you can't do on TV. So swear, show nudity, offend people, all the stuff you wouldn't normally do. You'd be surprised how reluctant people are to be rude. Britishness I suppose.

Funny - remember that being funny is very, very difficult. Ricky Gervais is funny and Steve Coogan is not. Disagree with me? Agree with me? Then you understand the problem.

You can't say to your mate in the pub, "It's kinda like this but not like this and a little bit like that and..." You can say, "it's called WinWorldCupTickets.com".

So why am I writing all this now? Well yesterday I saw a good example of a viral campaign and it reminded me of a bad viral campaign for the same sector.

Ignore the obvious problems (what sort of ad would £10k get you, you're doing an ad anyway silly etc) and you've got a great viral effect. The average Zoo customer will think - going against the boss, going against corporate, model, underwear, tits. Brilliant.

All we need now is a catchy url. How does Zootube.co.uk sound? See how simple that is?

Rude (or rather stuff you can't do on TV) = topless model

Funny = zootube.co.uk and men with camera and topless model in underwear shop 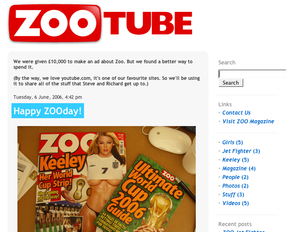 Zootube actually uses You Tube to display videos. There's a blog and you can watching the making of the video and other delights such as strip crazy golf and the Zoo chaps flying a fighter jet - you get the idea.

Bad Viral - (judge for yourself)

Now here's a bad one. Same audience, practically same mag, certainly same content, it's simple (tick) it's rude (breasts = tick) but it's just not as clever. You can judge it for yourself. 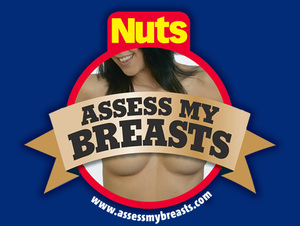