« If you could come back as a file format, which file format would it be? | Main | Jackson Pollock web thing »

What makes Will tick? 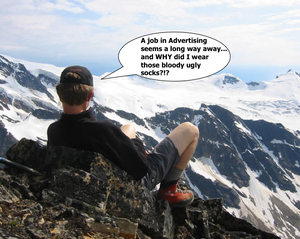 Will Humphrey wants a job in advertising. That's bloody obvious.

Getting a job in advertising (certainly with an agency you've heard of) is hard. So Will did what most sensible people should do and started a blog.

Will sometimes comments on this blog, quite often comments on Russell's, occasionally comments on w+k's and has been kind enough to link back here.

I don't read Will's blog everyday, in fact he doesn't update that often, but I take a look every now and then. Today, just by chance, I saw a PowerPoint Presentation in the side bar. It was called Confessions of a (wannabe) Advertising Man. I downloaded it and it's brilliant. Absolutely brilliant. 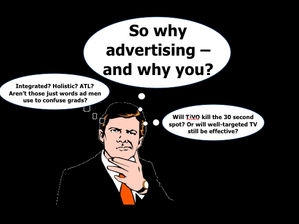 It's a CV, but a million times better. And for an Account Guy or a Planner it's double fucking brilliant.

From this short ppt I know more about Will than a 100 pages of CV would ever tell me.

that he's creative
that he can think differently
that he's willing to take a (little) risk
that he wears shit earmuffs
that he supports Stoke
that he can write
that he likes the Clash
that he can use PowerPoint
that he's good fun and probably a decent bloke to have around
that's he a little rough round the edges (and who wants to employ people that aren't?)
that he understands how to tell a story
that he's had experience at Fallon and DLKW
that he has dreadful taste in fonts and backgrounds
that he's embraced failure
that he likes The Mighty Boosh
that he's interesting and much, much more 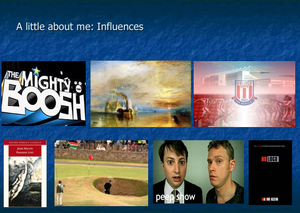 But none of that matters, because the stuff I do know is so much more valuable.

Don't you want to get him in for an interview now?

Posted at 21:07 in How To Get A Job In Graphic Design (Kind Of), New Thinking and Ideas, Seen and heard | Permalink

If I could, I certainly would.

Thanks very much - the infrequent updating is because i'm in London at the moment, living out of a suitcase/trying to get in.

My PowerPoint (and indeed, Excel) skills are bloody awful, I make no bones about that.

Glad you liked the earmuffs, by the way.

Definitely outside-of-the-box thinking. I like that it's PPoint, too..enough "old school" to appeal to traditional agencies, but it's posted on a blog, so he's obviously up on more current stuff.

Will, we should talk. Email me or come in for a chat.
C.

Oh Charles, have you forgotten you work at M&C now?

Good PDF download about 'How to get your first job in advertising' found in the JOBS section of Abbot Mead Vickers BBDO website, could be helpful for anyone interested in a career in advertising.