I said I would write something on the sad death of Alan Fletcher and that's what I've been trying to do yesterday and today. 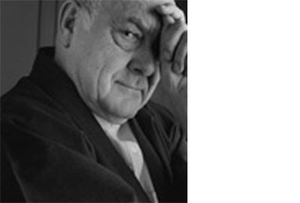 But the thing is I can't say any more than has been said here.

I never met Alan and so I can't reminisce like Michael does here. I'm presuming most of you reading this know who Alan Fletcher is, but if you don't I can't really add any more than his obituary in The Guardian, The Times or The Independent.

But I still feel like writing something about one of the greatest British graphic designers that ever lived. I'm very, very wary of sounding cheap or crass and I'm worried that the ephemeral nature of blogging is something that Alan Fletcher would have hated.

You hold them in such high esteem that even if everything the partners did from now on was rubbish they'd still be your heroes. The body of work that supports the myth is so strong, so unarguably good, they've earned a place in your personal hall of fame.

Sure people may knock them, or say they not as good as they used to be, but you know how good they are and you know that they invented the whole thing anything away.

You know how new bands (almost) always cite the Beatles as a major influence? It's the same with start up graphic design companies and Pentagram. It is with us.

Alan Fletcher formed Fletcher Forbes Gill in 1962 which became Crosby Fletcher Forbesand then Pentagram in 1972. All of these designers are brilliant in their own right but Fletcher deserves special attention.

1. This logo has it all. Elegance, simplicity, complexity, wit, modernity, longevity and a little twist. 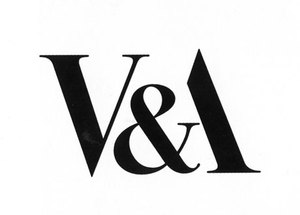 2. He wrote and designed this brilliant book (planners especially will like this I think). 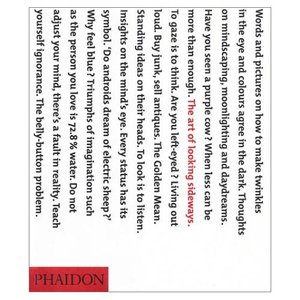 3. These are the gates to his house. Alphabet gates must be the dream of many a designer but few could have carried it off with such a deft touch. 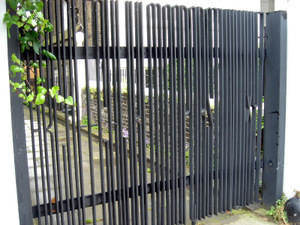 (Picture taken from Essgee  with huge thanks, usual stuff applies) 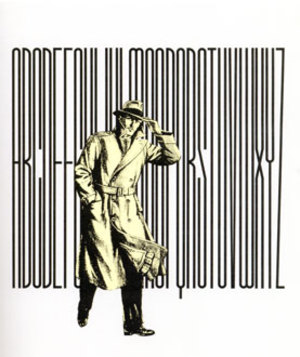 5. He designed the best ashtray ever. 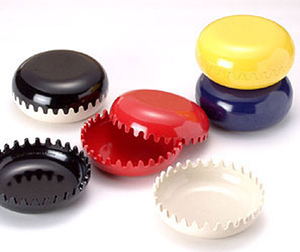 And much, much more. I'm sure he would have hated computational creativity.

Nice piece. I never met A.F. either, but he was a true legend and a massive, massive inspiration. He, more than anyone else, I think, brought about the graphic design = visual thinking paradigm (ugh, I sound like a suit). I have an old book of Pentagram's letterheads (actual letterheads they designed and then bound together) and Fletcher's legendary wit shines out throughout.

A superb designer, a wonderful man by all accounts and my heart goes out to his family and friends. It's also a great shame that he won't be able to see the Design Museum's upcoming retrospective of his life's work.

Completely agree with you about Pentagram being the Beatles of the graphic design world. No matter what happens, we'll forgive them because, well, they're Pentagram innit? ;)

Re: Pentagram - "Sure people may knock them" - guilty! but I still stand by what I said. However, I was truly saddened to hear the news and I feel we've lost one of the last all-time greats. Reading the many tributes these last few days have only reinforced the immense talent, warmth and wit of this eccentric english gent. I remember once, after a very entertaining lecture, complimenting him, suggesting that he should do this more often, for the benefit of future design students and education in general, as he'd make a wonderful lecturer to which he abruptly replied 'I bloody hate doing lectures!' He was like that.... He was clearly moved though when I mentioned an ex-colleague we both knew from many, many years ago. Penny, if you're out there - Baci!!
Getting back to the Beatles thing I agree with 'it might be a British thing and I think it might be a generation thing' - Beatles, the Pythons, etc..... Fletcher was definitely a part of all that. If there is to make a comparison, for me, Alan Fletcher was like all 4 Fabs all-in-one.

Alan Fletcher has never, to my knowledge, been mentioned within the context of Education. This is a huge oversight ....his contrbution was massive and came, ultimately, in the form of his massively impressive, "The Art Of Looking Sideways".
On it's publication even the most digitised "Mac Monkey" students were suspended in disbelieve at the rolling thunder power and clarity of it's message; some were even peruaded to pick up a pencll again and explore the essentials of concept and aesthetics which they had long neglected.
Within my own department "Sideways", has virtually, became a bible amongst both students and staff. It's basic intellectual dynamic both informs and inspires students and staff in equal measure.
Alan Fletcher's passing is a sad occasion but his "Sideway's" legacy will live on.

John, that's a really valid point. Thanks for that.

living in the sicks, Santa Fe, New Mexico, I just learned (3/20/06) of Alan's death. I did know him quite well as we worked together for LIFE in the UK for three years. He was the most original, totally focused, hard working creative person I've known. He thought through every assignment from every angle - typography, photographic, illustration, size, simplicity, directness, looking for THE solution, not just a solution. We shall all miss what we cannot have anymore, the original man, at home in his element all the time, every second of his life.

I too miss Alan.Strange because I last met him in the early 1950's as I was off to join the military.
Living close to one another in wartime west London my friends and I were used to Alan's casual regular arrival on holiday from Christ Hospital School. His presence was always interesting, dry laconic tales; always a relaxed languid approach to life. We were envious too of the fierce scar on his cheek (the left I believe) "A train crash in Africa" he would explain nonchalantly.
Some years later, as he painted my portrait, he confessed: "Toy train! I fell off" The girls would have been so disappointed.
Though I never saw him again his reputation and his work undoubtedly influenced my own writing. I wish we had kept touch!

Mr, Alen I have read your books Art of looking side ways & Beware wet paint, I hold both of them, I was encourage after reading it because it has given me a new dimension to think in advertising some what I have also becoming like it I see all odds with even shadows, I think there is so many things to explore, by reading daily one page thou rally I think I am discovering new ideas. I was thinking that if someone can make such a wonderful discovery why not to meet & discover more, so I was very eager to meet you. Just seeking opportunity to take a hand shake wit you.

A brilliant graphic designer!
I met Mr. Fletcher many years ago in Washington DC.
He gave a talk on Pentagram along with some of the
designers from the New York office.
His design work is timeless!

well i am inspired and intrigued now.. but back in the day when i wasn't a design student my doodle diary's first page always had a pentagram.. i hadn't heard of alan fletcher then.. now i have and i know why..

An amazing Designer who indeed looked at things sideways.....i wish i had a chance of meeting him, its a shame he`s not with us but his works reign...he is inspiring me now especialy with my work at college/University...and didnt know he lived in Kenya No wonder ...a Genious!

I got Alan, Colin Forbes and Bob Gill to sign my business card when I saw them speak at a lecture just before Alan Fletcher passed away. It was a great lecture.

That card is now one of my post treasured possessions. Now where did I put it?