« 10 Worst Posts | Main | Are Tesco's bad and other interesting debates »

"design agencies often have the ear of the client CEO"

I was given a free Independent this morning and I was delighted to see this when i opened it. 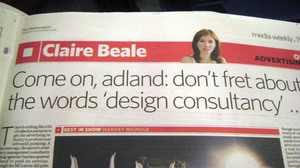 Claire is not referring to my post but commenting on the BBH/Sony thing. I don't really have any strong feeling on that, so we'll skip neatly over it.

Let's have a look at some of the things Claire says in her article.

"the management consultant is rapidly being replaced by the design consultant as the industry bête noire." I'm not 100% sure on this, but I do think design consultancies are gaining more respect and kudos. Especially the good ones. Obviously. In fact it's probably because there are so many bad ones that the good ones are starting to rise up.

"There are plenty of good design agencies that inevitably have a view on how a brand could communicate with its customers." Yes. But there are probably plenty of market research agencies, printers and photographers who have a view too.

"there are plenty of examples of design agencies all but writing the advertising scripts themselves." Really? Like who?

"The fact that design agencies often have the ear of the client CEO while ad agencies have generally been frustrated in their attempts to get into the boardroom" OK now I'm getting interested. I would probably think the opposite, but now that she mentions it, I bet the CEO's at companies like Nokia, Phillips, Sony (haha) and Apple listen to designers more than they listen to ad agencies. Interesting.

So, nothing major going on here, but perhaps another step towards world wide acceptance of my Design is the New Management Consultancy theory.

Posted at 22:11 in Design Is The New Management Consultancy, Quotes | Permalink