« Concerned | Main | There are three articles worth reading in Design Week this week. »

We were debating this, "Computers have become indispensable tools to designers of all kinds and have transformed the practice of design. With advances in computing power and artificial intelligence theory, we can begin to envisage computers taking on some of the creative act of design. What potential advantages or drawbacks would this have for designers? Should we fear that creative software is a threat to the design craft or industry?"

The lecture room (is that what they're called?) was fantastic. Tanaka is brand new and designed by Foster (click on project and then Imperial College to see more pics). 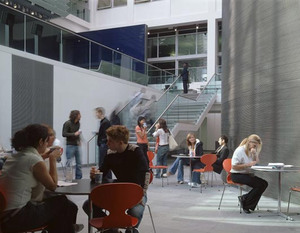 From the reception it looks like a huge slinky or a baked bean tin with the label taken off. This houses a lecture room for each floor. Inside it's all cool blacks and greys. What really impressed me is that the lecture room had WiFi. And each chair has a broadband point and a power point. At the front there was a PC all hooked up and ready to go with the sound all wired up to the speaker system. In short everything a speaker could want.

There were three speakers before me, Geraint who's Professor of Computational Creativity at Goldsmiths, Simon who's written his PhD about this stuff and an architect whose name I can't remember (which is bad, sorry about that). They were all pro computational creativity, I was the anti view. I won't go through their presentations mainly because I'll forget something and secondly because I won't do them justice. 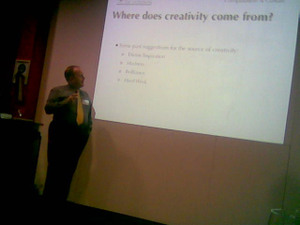 Simon and Geraint both had examples of where computers had been creative. Geraint had some music that had been generated by computer, Simon showed us work from this exhibition and showed some phrases a computer had generated too.

So far so good.

The architect showed model (after model, after model) of structures the computer had helped construct. Or something, I didn't really get his presentation to be honest.

And then it was me.

I had 10 minutes and I had to say why I thought computers couldn't be creative.

I started the same way Russell started his presentation here. The same black slide, the same music (it's OK, I asked him first).

I started like that for two reasons. Firstly, because it's a bloody good way to start a presentation and secondly because I believe a computer couldn't generate a piece of music that could generate the feeling of expectation, of excitement that that piece of music gives. That was my statement of intent, if you like. The audience seemed to like it.

Then I moved on to some fairly obvious stuff, Michaelangelo, Shakespeare etc 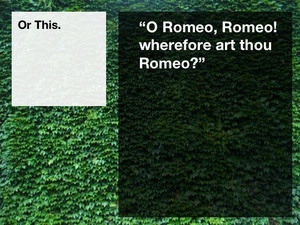 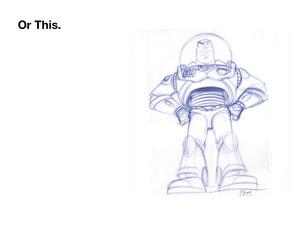 (Heads nodding in the audience) you can guess what people are thinking, "but that's a computer generated film". 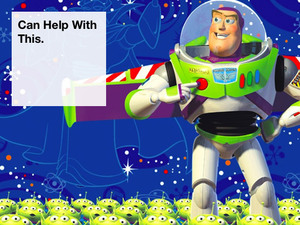 Yes, a computer can help, but that's all it can do. It can't actually create. The computer is not Walt Disney.

It couldn't come up with a story like this. 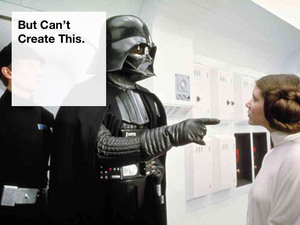 Why? I think the main reason is that creativity isn't linear. As Michael points out here, creativity does not happen like this: 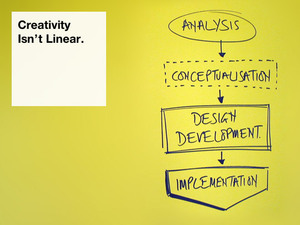 Computers do think in a linear fashion (we can argue what linear means another time) and therefore they can only produce versions of things. You'll never get that spark of genius.

And talking of geniuses. These people are all considered creative geniuses. Round pegs in square holes. What concerns me is that if we tell a computer to think like Einstein we'll get this: 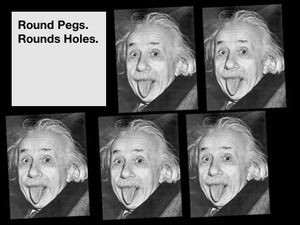 Which isn't creative at all. What was creative will now be the norm and something new will have to emerge. With computers we would never have gotten from Glenn Miller to The Beatles. If you see what I mean.

In the week Alan Fletcher passed away it seemed appropriate to hold this up as a great example of creativity. 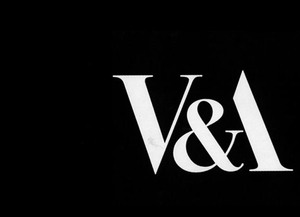 Then I showed this

and asked who could see the arrow. Most of them couldn't. When I pointed it out, someone actually gasped (I was pleased with that). You see, whilst we could probably get to the stage where a computer could produce a logo, there is no way it could create the added value you get when you see that arrow.

And I finished with this. 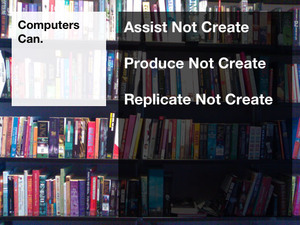 Next up there was a panel session and a lot of the questions were for me. We kind of agreed that a computer may be able to produce something that we could apply the word creative to, it's just that it wouldn't be very good. It's a question of scale. 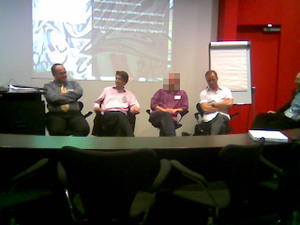 Considering I had two days to put that presentation together I was quite happy with it. I wasn't as familiar with the slides as I would have liked, but I think I did OK. The Chair called my argument 'powerful' so it can't have been that bad.

Afterwards I bumped into Nico, who is very interested in the Design is the New Management Consultancy stuff. So we had a good chat about that.

So, what do you think of computational creativity? Did what I said make sense?

Was anyone in the audience?

Posted at 22:08 in Conferences / Speaking, Design Is The New Management Consultancy | Permalink

Re the design as the new management consultancy argument, I don't think you go far enough. I think design maybe the new religion, a new kind of moral thinking in fact.

Look at the evidence;

Good work AGD. You're definitely right, computers are merely tools to be used and anyone that would rely upon them to produce something genuinely creative is lazy. Creativity has to do, on a simplistic level, with intermixing two seperate concepts to make a new one. So perhaps a computer could facilitate in the pairing of concepts but only a human being would be able to differentiate the plausible from the implausible. The mathematical equivalent which computers are of no use is the P VS NP problem: http://www.claymath.org/millennium/P_vs_NP/
Both are impossible without humans.

As for the previous comment however there is always the problem of deciding what is 'good design' or 'beautiful stylish design'? These are subjective ideas which pertain to your relative experiences with design and incorporate your own personal aesthetic. An aesthetic that may not be shared by others. But that's the beauty of life, people have different ideas about different things.

'Beautiful stylish design' can also be used to tell lies and make you purchase or fetishise crap you don't need. 'Good' design can be used for evil as well as good (ie. AK-47's and Nazis). I would also add the AK-47 to the functional design reduces death category. As for correct font usage, that hot front desk girl could have a penchant for Comic Sans. Would you stoop to that level?

From the 60s through the 80s movie narratives were replete with the trope of the "computer who gets too smart and takes over" or something. HAL, Westworld, WarGames, Terminator. This was because people didn't understand computers, for the most part. Now that many people use computers, that narrative has gone away, for the most part -- it doesn't speak to our fears anymore, people realize that computers are just tools. And this during a period in which I'm sure advancements in AI have been phenomenal. We're very confident of our ability to harness computational power precisely because we recognize that it isn't very similar to human cognition.

Hi there, you make some good points but fail to "demonstrate" that computers can't be creative. Understandably so, as such statements are impossible to demonstrate. Framed the opposite though, it becomes incrementally possible to show:

1) what one defines as creative
2) instances of 1) generated by computers
3) synthesis "by" in 2) is qualitatively different from "with", implying agency

Technology and creativity (the dual concept for which we still have no term) are getting far.

Keep an eye on this field in the next few years. You'd be surprised to see that "impossible" becomes "possible" (in a sctrict, formal sense) over the years.