I've spent the last couple of hours trying to collate the information I need to finish a post I'd like to write.

Except that I haven't found what I was looking for, instead I've found a whole bunch of really interesting stuff that only hangs together by the fact that I stumbled across it all one autumnal evening.

So to share all this with you, I'm going to bundle it all up in a little package called 'The Story Of A Blog Post'.

On Saturday we went to see Thomas. 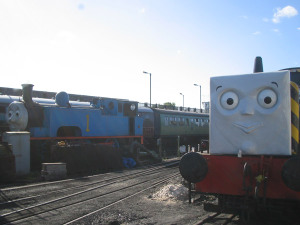 It was brilliant, of course, really good fun and exactly the kind of thing you should be doing at the weekend. 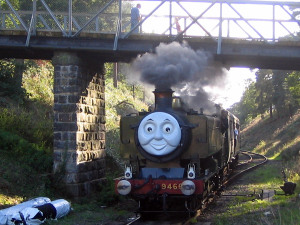 And because I have the graphic design disease (more about that later) I kept spotting things like this: Which reminded me of several things. How brilliant British information design is and was. 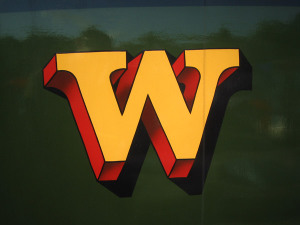 How nice it is when people bother to lovingly paint type and how nice some of the British Rail graphics used to be. This got me thinking about the British Rail train identification system that won loads of awards and they always used to go on about when I was at college. It looked like this: 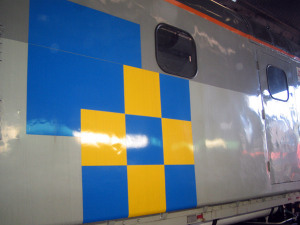 First off I found this:

Which was designed by Design Research Unit who started trading in 1943 and in 2004 merged with Scott Brownrigg. That's a hell of a long time for a design company to be around. Most of them go to the wall within 3 years. DRU also designed a generic wayfinding signage manual for train stations in 2000, which in turn is remarkable as they were also asked to do one in the 60's.

I've always really liked this symbol. It's graphic, simple, elegant. It's got movement, it has two arrows, it looks like train tracks. It does the job of a logo well. No complaints.

Which of these is the correct version?

It's the first one. The top arrow points left because trains always keep to the left.

On the logo for Sealink the symbol is reversed because it looks like an S. Interesting eh?

Next up I stumbled across this:

Did you know that in the 1970's British Rail actually designed and patented a design for a flying saucer?

The flying saucer originally started as a proposal for a raiseable platform. However, the project was revised and edited, and by the time the patent was filed had become a large passenger craft for interplanetary travel. It was to be nuclear fusion powered, utilising laser beams to produce pulses of nuclear energy in a generator in the centre of the craft. Pardon my language, but how fucking brilliant is that? You don't get that under privatisation.

Then I rediscovered Jock Kinneir & Margaret Calvert. Two brilliant designers who designed the current signage on Britain's roads in the mid 60s.

At the start of the 60s, determined to illustrate the haphazard state of British road signage a chap called Herbert Spencer drove from central London to the recently opened Heathrow London Airport and photographed each of the road signs that he came across along the way.

He then published the result in two photographic essays in a magazine called Typographica. This provoked the government to redesign the system. It ain't that simple these days. 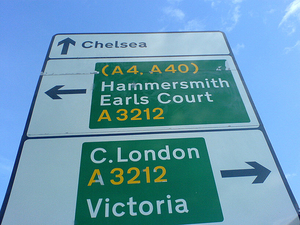 The British system is now copied round the world as was pointed out to me the other week by a colleague who's just returned from Dubai. (Picture taken from Greg Valiquette with huge thanks, usual stuff applies. Greg isn't my colleague by the way.)

Next up this random list of links about design. 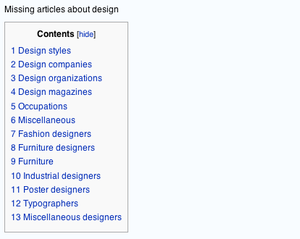 Then the web took me on a visit to the National Rail Museum in York. I've been there in real life to talk about a project that sadly never happened. It's an absolute treasure of graphics, posters and signs. They even have a real sign for Platform 9 3/4. It's better than this one. 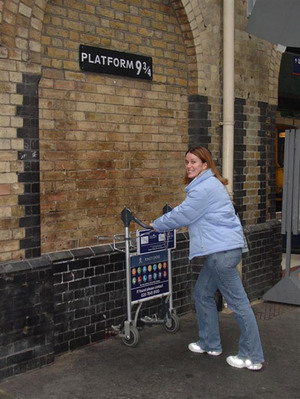 (Picture taken from Steve and Brooke with huge thanks, usual stuff applies.)

Although that one is brilliant too.

Look at this stuff. 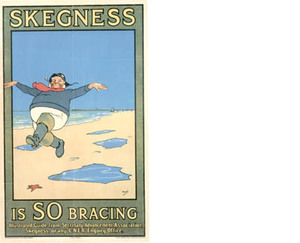 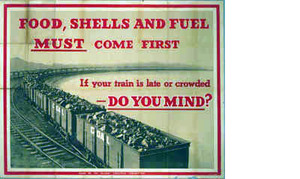 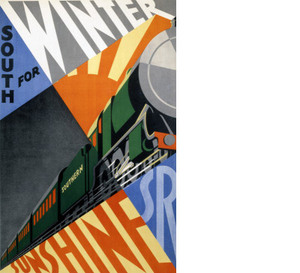 Isn't it brilliant? Even this is good. 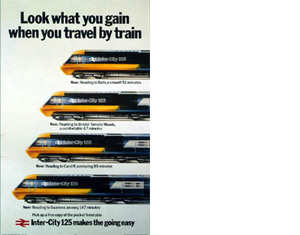 Last and by no means least I found this.

A typographic walk through London by Phil Baines. 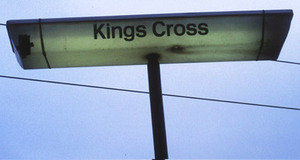 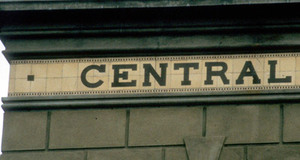 I must do one of those myself, one day.

Still no info about the British Rail train identification system that won loads of awards and they always used to go on about when I was at college, but isn't the web the best thing ever?

As a Yank, I must point out one bad quality of that British train logo, which is that the two "arrows" look more like planes than the parallel lines look like track. You may have more associations in your head linking the logo with trains, but they really do look like planes.

Fair enough point, and I dare say it's not just a 'Yank thing' (would be interesting to get the views of young UK teens today that have not been predisposed to this piece of British train-ography). That said, is association with planes really such a bad thing? It's probably fair to say that planes are regarded as being the most 'superior' form of travel (well, pre-Easy Jet anyway!) so tapping into this discourse has some obvious benefits (heightened emphasis on speed, distance potential etc.). Well, so Saab seem to think so

Brilliant. I'm knackered and ready for bed. But decide to check my bloglines before I turn in. No new posts show up for NDG. But I decide to have a look anyway. And I stumble upon this gem of a post.

Being not quite ready for bed yet (clearly I have the graphic design disease as well..), I'd just like to build on my previous point by saying that I think virgin trains have done a commending job of making train travel feel more like air travel (check out the London-Manchester express for a taster). So, clearly the folks over at British Rail had pre-empted not only privatisation of the rail industry but the rise of Sir Richard! Genius indeed

About 3 weeks ago I finished working for Royal Mail - I was responsible for developing a strategy of commercialising their history and heritage. This is a long story - but to a designer (and it proved so countless times over the 2 years I was there) the material they have (literally) in their vaults is incredible. Thousands of posters, hundreds of thousands of photos, the government's film library, not to mention every piece of artwork ever created for stamps - including those unadopted. The graphic heritage on those shelves dates from 1650 - but the stuff that really rocked was the material from the first half of the 20th C - when 'graphic design' was to some degree 'invented' as an industry - communications grew up, and 'artists' were commissioned for this sort of stuff - as government departments like the Post Office patronised this development. The examples of typography made the heart flutter - when everything was in black and white and the postman always knocked twice.
It's difficult to get across the privelige I felt being a custodian of the opening up of this stuff - and the difficulties I experienced in doing it, incidentally, but thought it worthy of a mention.
I am convinced that the solution to its exploitation as a commercial body is design - led, and that the story of this success would be inextricably linked to a branding exercise leveraging the good old days of the Post Office for the benefit of today's Royal Mail - which has a less than public - service driven perception about it.
On re-reading this comment I realise there's an incoherence about it - but it's probably a suitable postscript to the massiveness of the collection, and of my enthusiasm for 50's design too.

Just saw that great train poster in "The Museum of brands, Packaging and Advertising" Notting Hill, on the weekend, which although boasting one of the longest names in museum history has a few gems in the cupboard, literally, including the 'holiday in skagness' posters too. Worth a look really.

That's a great entry; right up my street; I'm tempted to just cut and past it all and stick it on Ace Jet. I omitted to mention in my railway post http://acejet170.typepad.com/foundthings/2006/09/great_central_r.html that we were on a "Day out with Thomas"; our oldest boy loves all that stuff. Thanks for the links to, well, everything.

Have you seen the new typeface being brough in for US roads. Its remarkably similar to the one in the UK that Jock Kinneir & Margaret Calvert designed.

Oh, and because Hong Kong was under British control for so long, all the road signs are pretty much identical to the UK.

It was really disconcerting to be out in rural Hong Kong and see signs I know from home.

I've been wracking my brains on this one, but from my recollection the British Rail train identification system that won loads of awards was done by Roundel - and it was maybe done around the early 80s. The thing was it was a complete identification system for the freight division of British Rail - and I think they'd looked to the Netherlands for inspiration. I recall seeing some pretty wacky train idents on a trip to Amsterdam (and, no, it wasn't the skunk!) - they were probably done by Gert Dunbar.

All of that information was once in the public domain, but of course the early 80s was pre-internet. And I guess it's not yet quite come around for a revisit - hence it's pretty impossible to find on the web. But, just like glossy paper and rounded corners - what goes around comes around.

No new posts show up for NDG. But I decide to have a look anyway. And I stumble upon this gem of a post.

Yes Tomi, this is one of the best posts on this blog.