I met up with Iain the other day. I wasn't going to blog about it but I was looking through my iPhoto and I found these pictures. I'd forgotten I'd taken them. 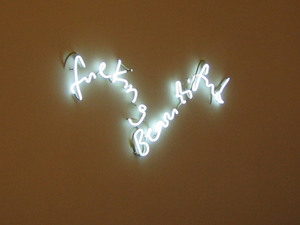 This was in the café where we met. Except it's actually backwards which explains the picture I posted yesterday. So you only see the above picture when you look in the mirror. Like this. 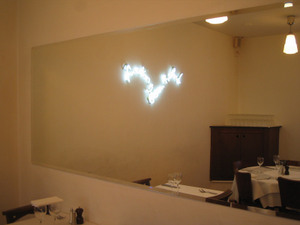 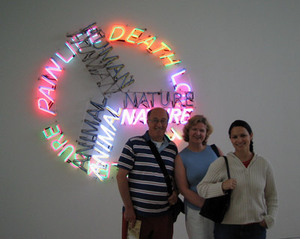 Which is something I saw here about three years ago.

On the way back to the office I saw these. 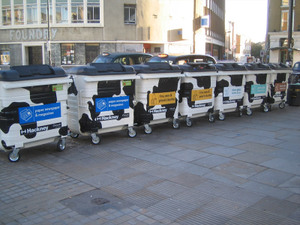 This is probably really old news and it's probably been blogged about a trillion times but I saw it and I like it. It's just a nice thing to do. You could show it to your Gran and she would 'get it' and that's the kind of design I like, design your Gran 'gets'.

It's great to see Councils doing more stuff like this especially as it's around an important issue like recycling. It reminded me of something I'd seen in New Cross. (Picture taken from Orhan with huge thanks, usual stuff applies.)

The artist is Bruce Nauman. I don't know if the 'white neon' one is by him too, but only the other day I was flicking through a Tracy Emin book and noticed how she'd done some neon writing. I hate when artists 'homage' so much they're really just copying someone else.

Nauman's neons are amazing though, I've always loved them.

Thanks Mat. I think the Fucking Beautiful one is by Tim Noble & Sue Webster.

Ignore me, I can't even spell my own name.

Oh it was very swanky.