Coffee was a resounding success. Apart from the fact we didn't make the girls target. We had four females, which is admirable, but not good enough. Anyway. 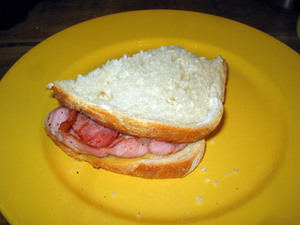 The benefit of having one at 8am is that The Breakfast Club do fantastic bacon sandwiches. Just look at that. Obviously they do bacon sandwiches throughout the day, but they taste better at 8am. 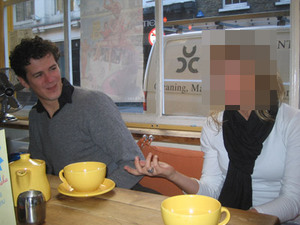 Here's Paul and Rebecca. Rebecca is from The Design Conspiracy, Paul is that Paul. 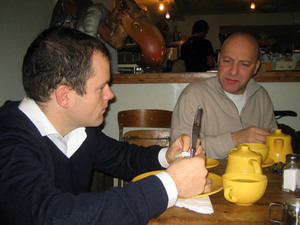 Paul, Simon. Although the picture looks threatening, Paul is using the knife to butter his toast. Simon mentioned a fantastic sounding blog he writes called something like 'You Pissed Me Off You Bastard' but I don't know the url. Simon, send it through. 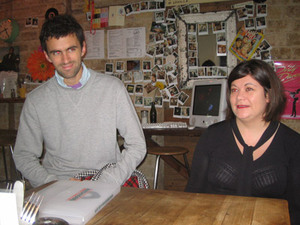 Here's Henry from the infamous www.henrylambert.com and Claire from the equally well known D&AD. Helen, who's off on holiday tomorrow. 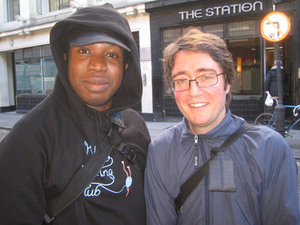 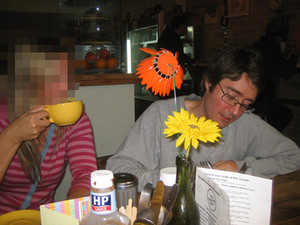 Patrick. signing the bill, and April from The Design Conspiracy.

As usual topics ranged from running to Google analytics via knobs, banks, finding a flat, office space, cartoon strips and James Jarvis. From various emails I've had I get the feeling people think these are high level brand meetings and you'll be quizzed on your knowledge polyphonic brands. You won't. As Russell has said many times before it's just a nice coffee and a chat. Everyone welcome.

Iain, Dan, Simon, all noticeable by your absence. Tut tut.

Right then, who's 'organising' next Friday's London coffee?

We talked about pickles/chutneys too.

It was a very pleasant start to the day - thanks all.

Lovely to meet the right people this time.

Helen, I'll try and find a better answer to the pickle/ chutney definition.

The blog, sir is

A small confession and a Big thank you. For about 4 months I've been collecting photos and writing the stories to make up this blog and have never got around to doing it, so you mentioning it has finally prompted me to actually but the whole thing together, hence all the entries coming in today. Typical sodding creative leave everthing to the last minute. Anyway enjoy

Why did you block that other girl's face? Is she in the witness protection program?

TYPEPAD, YOU PISS ME OFF YOU BASTARDS!

Simon, Paul is right, it's a brilliant blog.

Good to meet you all.

I think a pickle is more vinegary than a chutney. Chutneys tend to be sweeter. Relish - now there's a whole different story....

Paul/Ben you're so kind, the best bit about the blog is that you'll never short of material, expect to NatWest feature in the coming days.

And I'm with Claire, a perfect description on the difference between pickles and chutney.

Apologies for not coming. I am useless. Had to go and buy some fireworks. Next time...