Last Monday I was in Cardiff. 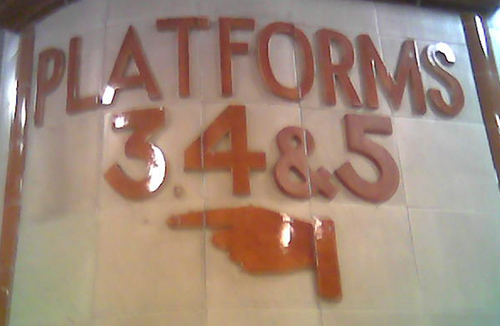 We were asked by the Cardiff School of Art and Design (or UWIC or something) to come down and give a little talk. Cardiff was dark and wet, just like Torchwood. 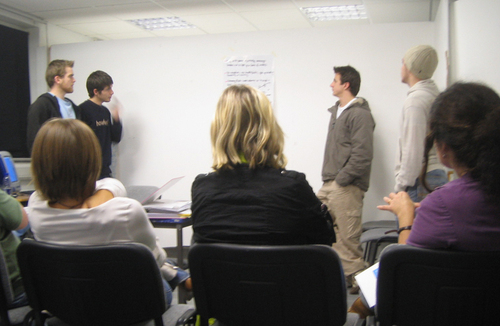 First off we had to dissect a brief with some of the 3rd year students. Fairly simple stuff, no harm done. They were about to enter a brief set by the ycn, who I'd never heard of. Looking through the book of last years winners I noticed a list of design consultancies at the back. I was just about to go mad because we weren't in it, when I noticed we were. 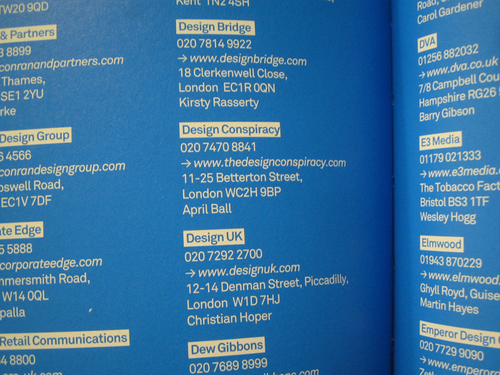 The college looked a lot like ours. Lots of rooms that are obviously well used, but that no one calls home. Lots of out of date but strangely comforting books lying around. 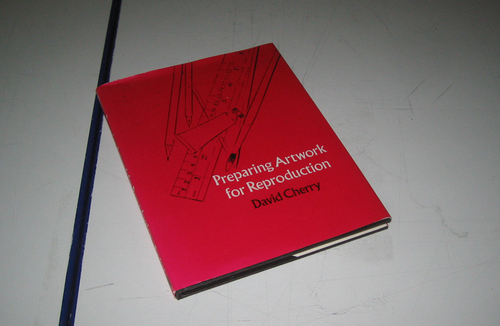 I guess the problem with Art Colleges these days is all the modules. 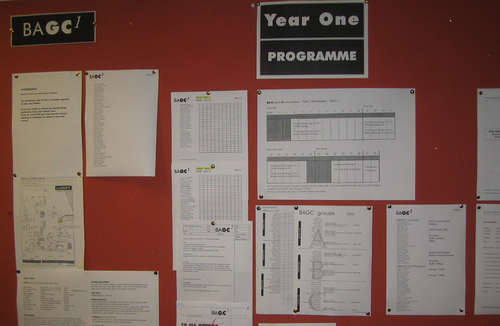 And the IMPORTANT MEETINGS. 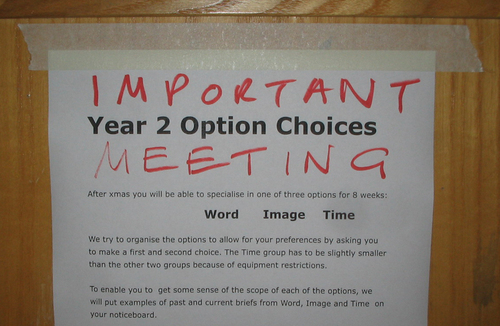 In the evening we were 50% of the Cardiff Design Forum. The other 50% were the design team from Torchwood, so no pressure there.

I think Kingsley and I did OK. Essentially we ran through our work, how we started and stuff we've learned. Not dissimilar to this. At the end we threw in a bonus slide called, How To Get A Job. That's a slight over claim, but we thought it would be helpful to say all the things that graduates do that piss us off. Helpfully, I'll list them for you.

1. Don't ring up and say, "Hi. Have you got any jobs?" Firstly, we probably haven't. Secondly, the person you're speaking to probably isn't the person who gives out the jobs. Thirdly, don't you know that sales people never ask questions that you can say Yes/No to. Try harder.

3. If you come in to see us, act like a human. Be yourself, be normal. Don't just stare at the walls.

5. When we ask who your favourite designers are, have an answer. And not Saatchis. They are not designers and this is not the 80's.

And some more stuff. We got asked lots of questions and quite a few people came over to talk to us in the bar afterwards. The heat sensitive business cards were a big hit.

The Torchwood people were brilliant, and I'm not a Sci Fi kinda person. They have a team of 100 designers in Cardiff working on Doctor Who, Torchwood and another one I'm not sure if I'm allowed to mention? Edward Thomas runs the team and obviously knows his stuff. The detail they go into is staggering. If they get asked to design a lever that an alien wil pull they ask why the alien is pulling the lever, what sort of hands will the alien have, why does it need hands, has it ever used a lever before, and much more. That's a pretty good way of dissecting a brief. At one point someone asked why the lift has pipes running along the side. Edward replied without hesitation that the pipes were needed to take water into HQ to cool the alien brain that powers the lift.

There was a pause.

And then one of the team said to Edward, "You've no idea how funny that sounds". Dedication and belief are no bad thing. 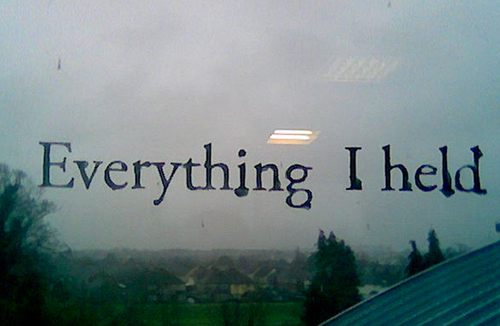 This picture is one of many reasons why you should go to Art College. You get to paint "Everything I held" on the window and no one is troubled. In fact you could probably hand it in for one of your modules.

By the way, is anyone reading this an art student? Please leave a comment if you are.

Posted at 22:06 in Conferences / Speaking, How To Get A Job In Graphic Design (Kind Of) | Permalink

I'm an art student!
You're right about painting on windows - we have "I eat" in a speech bubble painted onto one of ours.

I am a design student too.

I always thought it was funny how there was always some kind of art in the halls, etc. so I installed a sculpture on the side of a major hallway without permission. It stayed up for 2 weeks undisturbed until I removed it myself.

By the way, thanks for the posts, they are very helpful. I almost done with school and looking for internships or entry-level work, so it really helps to see what agencies are looking for.

Ben, I am very pleased to see that old book by David Cherry. Excellent. Just hope they read it.

I'm a design student in south africa and our walls/windows have random things all over... I know there's a quote which has been copied out onto the one wall which has been there for years...

I've been reading this blog for a while now, and so chuffed to see this! I've recently graduated from Cardiff, I'd have loved to have given a talk buy you guys!

I'm glad it went well, and I hope Cardiff can get more top-class guys like you away from London to give talks!

This has brought a smile to my face! Good on Olwen

and just to clarify,

the "Everything I held" had "so dear" ... "disapeared without a trace" on the floor underneath it, but it must have did what it said on the tin! (It's a David Grey lyrik)

I'm a design student and was at that Design Forum talk, thanks so much it was really inspiring. I think I asked some garbled question at the end about banking with the co-op. Hope you'll be able to come back in future years? tom

this is a great picture!

5years later and the blog is dead. Dead or comatose. Guess you just moved on to more improtant stuff and are too busy to manage your social media agenda. Good luck - I was just researching UWIC-CSAD from Rotterdam. That's east of London.

Don't ask how I got here, I very much do believe through probably the strangest and most random chain of events on the web. It did, however, start off with Erik Spiekermann's twitter feed.
Some really cool stuff here, thought I'd mention that I attended the D&AD portfolio clinic a couple of months ago, and these pictures just look all too familiar.
I'm a BAGC student at the Cardiff School of Art & Design. Hah.
Nice shot of the window lettering from the 2nd floor landing.