The best organisation of the information to aid the communication

This post and this post from Russell have made me think of another reason why the iPhone is so brilliant.

(Picture from the Darth Strategist, with thanks, usual stuff counts)

Yawn, yawn, another Mac fan saying how brilliant the iPhone is. Yes - but listen to these comments from one of those posts about the design of remote controls.

"they should do a "big button" version so that grandparents who can't see so well and have arthritic fingers can use it. That goes for mobile phones too"

"Maybe they should supply his and hers remote controls"

"Why oh why are there no user intuitive remote controls?"

This is exactly what the iPhone will be able to do. The folksonomy of button design, if you like. It could learn which features you use most and only display those buttons. 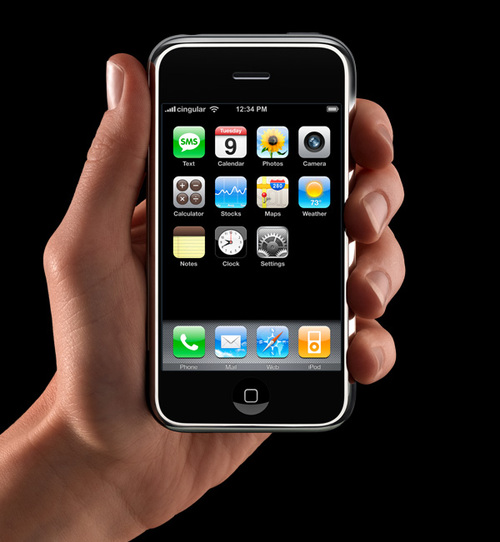 (Picture taken from Apple, obviously. Usual stuff applies but I'm sure they won't mind. Especially as I'm about to give them $600.)

The best design organises information in the most useful way, but makes that organisation look seemless and elegant. Think Underground map. Not cartographically correct, but the best organisation of the information to aid the communication. That's what the iPhone should be able to do. That's great usability.

I once bought my Mum a calculator from the Early Learning Centre. Why? She kept complaining the screen and the buttons were too small on her calculator.

With an iPhone you could tell it you were 90 and struggling with the buttons and then you could download a bigger set of buttons through iTunes. How simple is that?

And that is revolutionary. Now you might be thinking, 'yeah yeah, it's not that clever, anyone could have done it'.  Anyone hasn't got the iTunes infrastructure that Apple has. Anyone hasn't got the consumer confidence. And anyone hasn't done it. And as we keep saying it's all in the doing. Which is why everyone has phones designed like this. 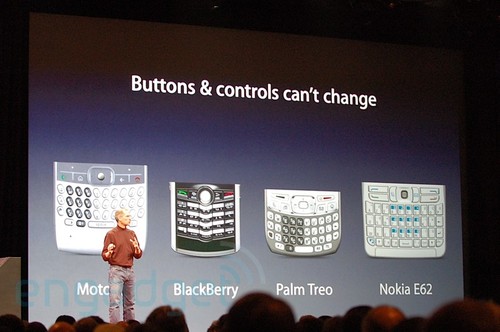 (Picture of Steve Jobs talking about 'not so smart phones' at the iPhone launch, from Engadget, thanks chaps usual stuff applies)

I wonder if Matt has anything to add?

I'm very much liking the fact that the touch screen interface means that the phone is highly customisable.

At the moment their business model is based on us buying new hardware from them as regularly as possible. They constantly roll out new product in the hope that we'll respond like magpies with an exclamation of "Ooh, shiny!" and immediately hand over another few hundred for a piece of kit we basically already own. (And if we don't, they've got it covered anyway, having taken built-in-obsolescence to a whole new level with their iPods, so that they last just a few days beyond their warranty and expire like suicidal may flies.)

With the iPhone, they've created an updatable product, a piece of hardware that could and should last for, omygosh, five years? (Assuming the screen is made of tough stuff...)

It'd be nice to see an innovative company like Apple taking the lead, and saying "You know what? We think the environment and this planet is pretty important. So we don't want you chucking our phone on the landfill every year just to get that thrill-of-the-new when you pick up our latest model. We'll give you new software and apps for the phone, so you can still get that buzz, but without adding to the dead appliance mountain.

Whether they'll actually do that... well, I'm not holding my breath.

I agree that would be brilliant if they did that. Particularly from a sustainability point of view.