Why The Guardian didn't go tabloid

yIt's a well known fact that I don't like the Guardian redesign.

Still, as people keep pointing out to me, it won a D&AD Black Pencil - so what do I know?

Last year I met someone who used to work at The Guardian and this post the other day reminded me of a little tale.

One of the things that annoys me most about The Guardian is the size. It's neither tabloid like The Independent or The Times or a full broadsheet like The Telegraph. Apparently when they were working on the redesign, the editor used to have a presentation where he explained why they didn't go tabloid.

He took the front page of the tabloid Indy and the tabloid Daily Mail and swapped them around. Then he asked people which one was which.

So, let's play a little game.

Question A: Is this an Independent front page or a Daily Mail front page? 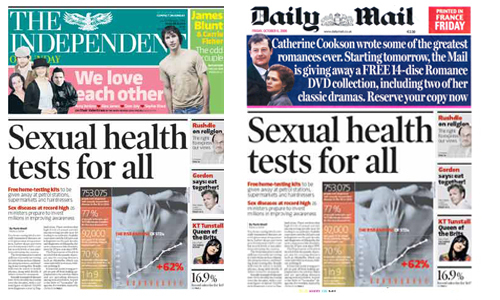 Question B: Which one of these is a Daily Mail front page? 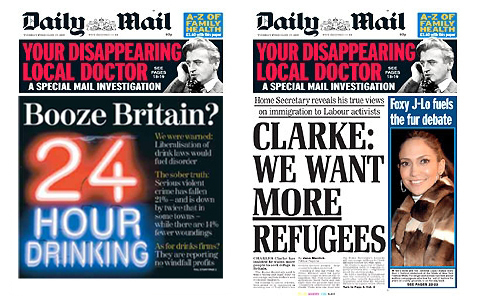 Question C: Which one is the real Independent front page? 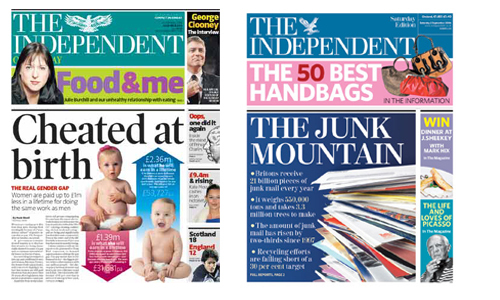 Makes you think doesn't it? There you go - why The Guardian didn't go tabloid.

Apologies if you live outside of the UK and that post doesn't make any sense.

Posted at 09:01 in Design Is The New Management Consultancy, Examples of Bad Communication, Graphic Design Reviews , Seen and heard | Permalink

The size of the Guardian IS annoying. People who buy the Mail will always buy the Mail though, how much does the front page really influence people?

I liked the fact that yesterday whilst every other paper was running cover Oscar pictures, The Independent's cover was running a story on how banks are robbing us.

It didn't make me buy it though.

too bad im outside UK... cus i would really apreciate that comparison. Here in portugal we have a newspaper called Publico that was recently redesigned by Mark Porter, art dirctor from the Guardion... and i just dont like it :/ follows most of the things you dont like on the Guardion

I'm outside of the UK and it doesn't make much sense to me. Could you please post the answers to those questions? That might help...
Here in the Netherlands a couple of papers went tabloid lately and I think for all papers involved the circulation went up. I do think they look just a little bit less serious/trustworthy now.

Question B: The one on the right

What do I win?

Richard - I reckon the prize ought to be that Innocent book, don't you?

Yeh David, whatever happened to that?

No good asking me Richard - get on to Ben about it.

I quite like the redesign except for two things:

A. I think the headline is too close to the top banner. I keep wanting to move it down a few millimetres so there's a balance in white space above and below.

B. The sections in the middle are still too big - I usually make sure I but it on Mondays and Tuesdays for the media and education supplements respectively. They are a nightmare to read on a messy desk or on the train, and (as I discovered today while trying to produce some handouts for a lecture on the contribution design can make to education and health) they don't fit on a photocopier being ever so slightly bigger than A3.

Meanwhile the crappy G2 supplement is all nice and manageable.

The problem with all tabloids is that there is not enough news on the front page. And banner headlines overwhelm everything. They are almost threatening. ie You vill digest this story and agree with our take on it before you are allowed to continue.

papers are a dying media anyway, so it's all a waste of time and most importantly paper/resources. in the interests of 'sustainability' it's something most of us could live without. it all seems so out dated.

Richard and David - Yes, yes, yes. I need to think of a quiz question.

They've even got their own phrase for this at the Guardian.
They would say that berliner was the right size for a paper that didn't want to end up shouting all the time as it allowed for the "the geometry of news"

One of those covers looks familiar. I remember it because it seemed so f**king funny in context - sitting in the newsagent. There's a picture of it on my blog: