The theme for the Future Marketing Summit this year was Integration and I was speaking on the Design panel. So let's talk about that first.

The panel consisted of me, Tim Ashton from Antidote, Douglas Broadley from Imagination, Mike Bennett from Digit and Lucy Johnston from somewhere I can't remember. 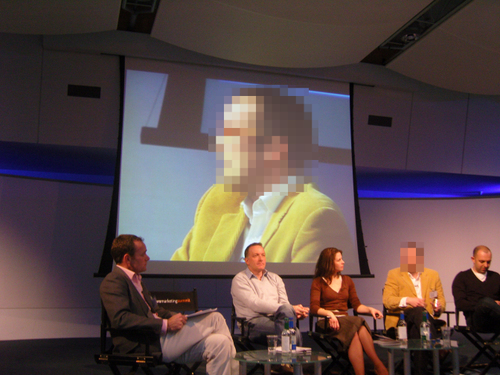 Me saying something worth writing down.

We discussed the growing importance of design in adland and why design is different and why design is important. Mike made a good point that design is very holistic in it's nature and offered up Apple as a good example (ads, stores, packaging, product, interface).

I suggested that design is still about problem solving whereas I don't think that advertising is always is. That didn't go down very well.

I also unleashed my soundbite about the value of design: imagine what would happen to GM's share price if they announced that Jonathan Ive had joined their board as Head of Design - it would go through the roof. That was better received.

We all agreed that design must be brought in earlier in any collaborative process, not added on as decoration at the end. Like all these things we could have discussed it long into the night...

The rest of the conference (summit) was really enjoyable. Lots of very clever people speaking and lots of 'big names' in the audience, in fact if you were a young person starting out in advertising the access to the top dogs was quite amazing. Where else can you walk up to Michael Wall (President of Fallon) or Rory Sutherland (Vice Chairman of Ogilvy) or Steve Henry (needs no introduction)?

I met Beeker and Famous Rob for the first time which was nice. I've met Beeker before but only really briefly. The weird thing about blogging is that they both felt like old friends already - Known Unknowns as Richard might say. Rob still hasn't got a job, so please give him one now. He's clever, dedicated and refreshingly he often has opinions that aren't the same as everyone else in the blogoplanoshpere. He should get a job based on that alone.

Richard and Russell were also there. Russell sat on a panel and (as you'd expect) caught the mood of the crowd well. Richard chaired a panel and was startlingly brilliant. Not many Chairs bothered with an introduction. Richard did and he even managed to shoehorn his Donald Rumsfeld quote into it. Funny and clever. 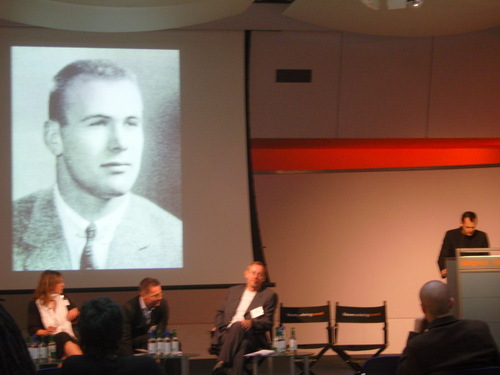 The summit kicked off with big Kevin doing his big Sisomo set piece. I was really expecting this to be awful, it wasn't. It was OK. It was slick. Very slick.

Kevin knows how to work a stage and he knows how to work a PowerPoint. Kevin has the weirdest accent I've ever heard and as Beeker correctly points out he says some bonkers things like, "clients say to me ROI, I say to them Rinky Dink!'. But then if the Global CEO President General in Chief of Saatchi and Saatchi can't say things like that, who can?

I'll glad I saw Sisomo. I was left feeling dazzled by bullshit but I can understand why clients would go mad for Kevin's schtick.

Who else was there?

Mike from Digit was brilliant. You don't get to hear digital people talk enough at these kind of things. My favourite bit was the Sony Erickson camera phone thing. It's lovely to see online moving offline in a clever way. The Persil Dirt Is Good stuff was good too. The hairs on Richard's neck stood on end when someone said Dirt Is Good.

Tim from Antidote was good. The work they're doing is great. I saw the Shell ad they did when I was in Barcelona and I liked the concept a lot. And they are involved with We Are What We Do and the Anna Hindmarch handbag thing. All good stuff you'd liked to be involved with. As always these things are too long and people speak for too long. By the end of the afternoon you can't help but get serious conference fatigue.

People always ask questions that go, 'hello, this is my cv, this is what I think, do you agree?'. That is not a question. A question is a sentence that ends with a question mark.

The summit was one of the dates on my World Tour, which is going well. All venues sold out. I'm back at home now having a few Lemsips and getting ready for Russell's gig on Wednesday and the big finale on Thursday.

Posted at 16:00 in Conferences / Speaking | Permalink

Nice sum up, particularly for those of us stuck at the bottom of Australia, thanks Ben.

Some nice summing up, thanks :)

True about most of the questions, though I did enjoy the unknown woman having a rant then singing the praises of Fallon before asking half a question!

So who was shit ?

And can we have a bit of commentary on the building ? If it was the one off Tottenham Court Road it's a seminal piece of architecture.

No one was really shit on performance, but the most derided content is easily Kevin Roberts.

He said lots of interesting stuff...that we already know.

He made a few "bold" statements that say the obvious or what has already been the case.

The building was great, roomy and comfortable, nice interior decor.

Tom - some of the viral stuff was bit tiresome.

I too am interested in the yellow jacket. Is there a story behind it? It's not an everyday purchase.

It's also made of corduroy. Good thick corduroy not that thin rubbish you see these days.

It's a whole suit, but the trousers don't get the 'wears' they deserve, really.

I've seen it 'live', and it works, seriously.