If you're one of the people who doesn't like it when I talk about what we do here then look away now.

I want to talk about this project for 4 reasons.

2. I've had a lot to do with it and you lot deserve some proof after all the pudding making.

3. It involves blogging and it always seems right to talk about blogging on a blog.

4. It involves quite an unusual approach to corporate ID that I'd like to talk about.

We've just launched the 100 Ideas minisite for Southbank Centre. 100 Ideas is a series of events, talks and performances that look at the role of culture in today's society. From these events the curators are hoping to compile 100 ideas concerning the central theme.

We were asked to create a minisite that helped build a 100 ideas community. 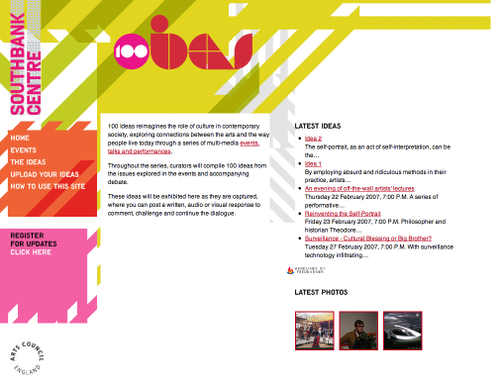 Partly because of a small budget and mainly because it makes sense to use tools people are familiar with (see BBC Web Principle Number 3) we've used a lot of stuff like Typepad, Flickr, Feedburner and YouTube.

So here's how it works.

The homepage (are there such things as homepages anymore?) contains an explanation of the site, a feed of the latest ideas and the latest images.

We've used Flickr to host a Flickr group. The community can add pictures from events they attended or as an illustration of ideas they've had. The website pulls all these pictures through.

We've used Typepad to host the events listing and the ideas . This way it's incredibly easy for the 100 Ideas team to edit events and upload new ideas, plus it allows visitors a really easy way of adding comments. 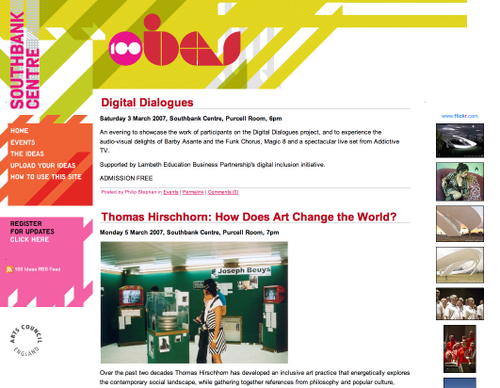 You can upload your own ideas in a section which is essentially one post with the comments left open. Comments aren't approved (although obviously they're checked) in the spirit of openness. If the curators like your idea it will be moved to be one of the 100 ideas.

There's a lot of changes going on at the Southbank Centre and they've just launched a new identity created by Wolff Olins.

As Ms Rawsthorn points out dynamic and changeable are all the rage right now and this identity is no exception.

I wasn't sure about it at first, but having worked with it I'm a big fan. Essentially, each piece you create involves creating a distinct pattern based on a series of pre-designed weaves. The identity is designed to be incredibly flexible and I guess this project is evidence of that. 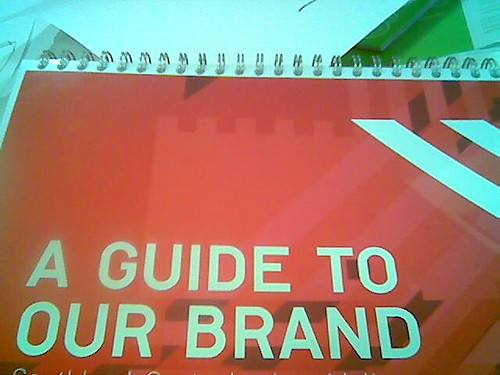 Our weave was approved pretty quickly by the brand team and it allowed us to customise the blog template in a way that still retains the safe familiarity of the Typepad platform but still looks fresh.

One of the big debates we've being having in the office recently is how User Generated Content will affect design. How can you design something that you have no control of? How can you design so that your users can design? I think this identity implemented in this project goes someway to answering that.

So there you go. What do you think?

(You can look back now.)

Very nice piece of work, that.

I'm a tad bit put off by the style, but that's just my taste. The most important thing, the typographic information, is clear. As a whole, it's executed nicely. It's consistant, and it works. One great thing is that you can change the style easily, if need be. Isn't looking ahead part of graphic design? I think this illustrates that notion.

I didn't like it this morning, so I thought I'd keep my opinions to myself. But now I I'm a convert. It's very good.

The way you thought about the whole project is great, congratulations, and I love the idea of not-so-quite-controlled design. Perfectly controlled design is just designers' utopia.

Very nicely done. I especially like the "How to Use This Site" section - I think too often we forget that although we may be quite experienced in website usability, a lot of folks aren't. With such a user-generated site, it helps to give them a quick spot to see how they can get involved.

I must admit, the "Upload your ideas" made me think I'd have to have created a word doc, or image, or video already to upload something to the site, rather than simply leaving a comment. "Post your ideas" may have lead me to believe it'd be easier and I could just leave a comment/message. Just a thought.

You're clearly more intelligent than Lebowski.