I like to think that all my listeners are a clever bunch, but Andrew is cleverer than most. Back here he spotted that the Flag pictures I've been doing didn't quite, "reflect the playful, subversive tone of voice" of other stuff we've done.

He was right. Those pictures were just messing about, because we had something a little more subversive in mind. 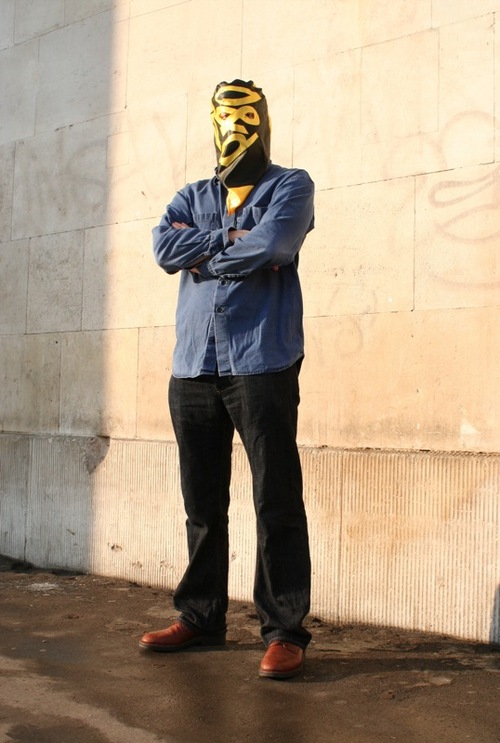 The brief asked me to produce a piece of work that said something about me and my relationship with creativity. I thought long and hard about that. It's easy to find stuff you were inspired by or hark back to your college days. But really all that stuff has been about getting to where I am now. My life long love affair with creativity has spawned this which I set up with four friends six years ago.

As you know, members of The Design Conspiracy never show our faces in the press or promotional literature. Over the years this has caused surprise and amusement, especially when we asked one press photographer to shoot the back of our heads.

Therefore it made perfect sense to make the flag into a mask, cunningly using the ampersand as eye holes. So, above is a picture of me staying true to The Design Conspiracy's publicity guidelines whilst wearing what I hope is the first ever D&AD mask.

There are a few more pictures here, including some of me in the mask with the current D&AD president, Mr Tony Davidson. 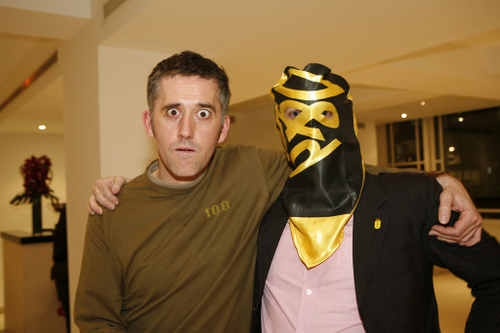 Picture with Tony taken by Christine Donnier-Valentin. Tom took most of the other pictures and April made the mask.

Love it. And you're wearing your 13-year-old shirt, aren't you?

I'm doing everything in my power to make sure you win.

I can't get trackback to work so I quote myself: "I love the way the second ‘d’ is like a distorted mouth. Attaboy! Though the clothes suggest local post office robbery, rather than liberation rebels, or kendo nagasaki."
I'm not as clever as alex who spotted the shirt.

you're gonna love the post I'm about to do about Tim's new film.