I used to work here. It was a pharmaceutical advertising agency called Luxford Advertising. It's long since gone now. It didn't go bust, the Chairman just decided to close it one day. Well, he didn't just wake up one morning and decide to close it, he put a bit more thought into it than that. 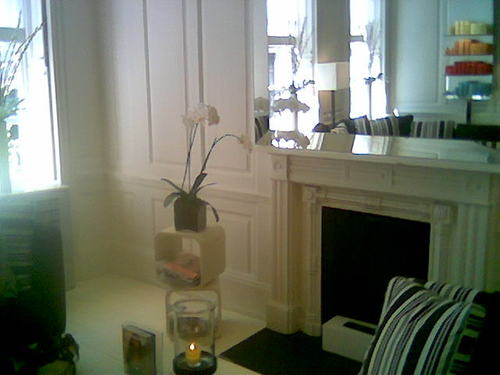 Kingsley and April once heard Paul Smith say that his dream is to one day just close all the Paul Smith shops. Put up a sign that says, 'thanks for your custom, we are now closed'.

Anyway, that picture up there used to be the Boardroom. Now it's the waiting room for Charles Worthington hairdressers. I left Luxford in 2000 and it closed in 2004, I think. There were around 25 staff and they did everything from DM to TV, but mainly print ads. The agency was based in a lovely Georgian (?) terrace that's now just round the corner from our office. When someone told me it had become Charles Worthington's gaff I wondered round for a look.

This used to be the basement. It still is a basement. It used to house two copywriters, an art director and a creative secretary. 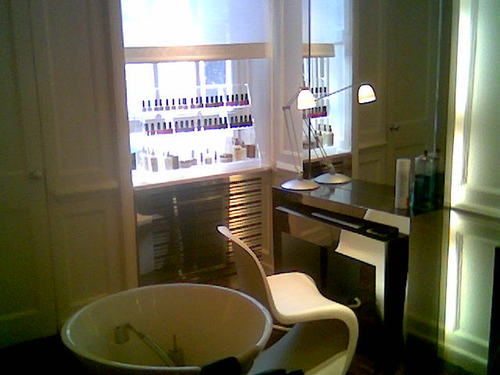 This used to be reception. Reception was on the 1st floor (that's one above ground for my US visitors) which used to annoy the hell out of me. Receptions should be on the ground floor. Obviously.

Through that door, top left used to be the photocopier and where the nail varnish type stuff is used to sit the fax machine.

It was very odd going back. So many memories, so many visual memories smashed by CH's architect. The place looks really nice, by the way.

If you're reading this and you used to work at Luxford, leave a comment below.

This only goes to prove that my first answer to your last post - "a consultancy fee" - was the correct one. All that money spent on white lilies and pseudo-anglepoise lamps and they can't even get the sign on their old gaff right. Or maybe it's all a design conspirancy?

"Pseudo-anglepoise lamps" that is an early contender for comment of the year.

Thought-provoking post! I own a 10-person graphic design studio which is located in a gorgeous, historic space. It never occurred to me to ponder what might happen if I throw in the towel - could our space become a florist's shop? a tanning salon? a brothel? Scary thoughts!!! I guess we'll have to stay in business...

I used to work there too (not for long). Do you remember an italian art director who couldn't fit in?

I used Luxford agency when I worked for Pfizer. What happened to Peter and does anyone know where Dawn Waggott went?

I worked there during the late nineties, as a temporary experimental diversion into advertising from corporate design, and have mixed memories about Luxford's demise. I don't think a single person I spoke to wanted to really be there. Sorry if this is harsh but it had that sort of feeling about it. The staff in the basement were quite scary, but somehow friendly at the same time - a kick back to the eighties boom hidden from light for hours on end, fag smoking, music blaring and you don't want to know what was on their browsers sometimes... The designers (I remember Michelle for her dress sense) were all likable as were most of the account handlers and writers (especially Liz ?). Still, this is what you endure working in high pressure environments and for great customers like Pfizer and whoever commissioned the Clarityn work during those years. Moved to Bath now to run my own agency and have kids, hopefully learning from those years. Regards to all who might remember me.

Great to see you are doing well Ben! I now live back in Ireland and am mum to two boys.
One very distinct memory I have of you at Luxford Ben was when your flat was broken into and only your flatmates CDs were stolen!!!!I don't know what that says about your tastes!

I used to work when Luxford was known first as Ratcliffe Saunders and James and were based in Piccadilly right next door to Fortnum and Mason.
Happy times used to do work for Schering, Luminar, Birk, Roussel etc. Like to hear from anyone during that era.

Piccadilly right next door to Fortnum and Mason - yep me too. Worked in the artwork dept

Hey Ben. How are you? Long time etc...and as this is a very old blog...is this site still live (I assume yes as there appears to be 2010 archives)? I have a love/hate thing going with my time at Luxford. I loved some of the people (especially the designers, the basement crew and Peter Tait, the old misery guts) but hated the stifling 'Top Down' decision heirarchy and the blame culture. There were days when you walked in the door in the morning and even before you saw another face, you could feel the negative vibes (man)...and others when the whole place buzzed. But the building was fabulous (at a guess, late Georgian/Regency). And overlooking the Freemasons Grand Lodge - I remember standing in the Boardroom watching the cult members scurrying in with their funny looking briefcases, all ready to roll up one trouser leg!

Ray - this was the office after the one on Piccadilly.

Hiya Ben, My first proper job out of Uni was at Luxford and I loved it! Started out as the Creative Secretary in the basement, with Sanjay and Paul the copywriters. I think I remember I was about the only person that could get along with Lesley the Creative Director, not sure why, but I seemed to have a special knack of 'managing' her. lol.

Have been looking on linked in to see if anyone I know is on there, but the amount of Luxford ex employees on there isn't very big, and not anyone I really remember from the year or so I was there.

Ended up in the Account Management department before I left and became very good friends with Dawn Waggot, and enjoyed working with both the Peters. Shame I can't seem to find anyone else to say Hi to! Cest la vie.

If you want to connect with an old Luxfordee on linked in I am under my maiden name Lisa Dellow.

I remember this place, started when they were in Piccadilly next to Fortnums.
Dave and Lesley in the Studio.
Jan upstairs and loads others but struggle to remember names.
I remember moving to Gt Queen Street and Graham doing a great job turning the building back to how it should be. Wonder what everyone else is up too since leaving
Ended up getting lured away by Gowers and then onto Dewar Alexander!!!!