This is one of the best ideas I've seen in a long time. 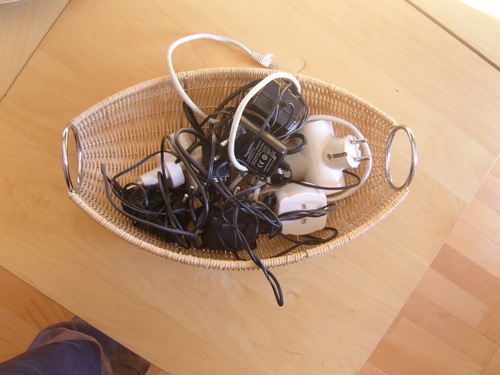 We rented an apartment in Barcelona last month and the owner included this basket full of every mobile charger you could ever wish for. All with Spanish plugs, obviously.

I've lost count of the amount of times I've been abroad, or even away from home in the UK, and forgotten my charger. It feels like part of you has died when that little battery finally gives up the ghost.

Six years ago, at the Edinburgh Festival I saw a mobile phone charging unit by Orange.  It was like a series of small swimming pool lockers. You paid a pound, took a wristband key and you could leave your phone charging in a secure environment. Brilliant. No more forgetting, or even if you've remembered no more carrying, that bloody lead. I thought I'd soon see them everywhere, but I never saw another one. Have you ever seen one?

The other day at the D&AD judging I saw one of these. It's not the same, but it's very similar. It may even be the same company that makes them. 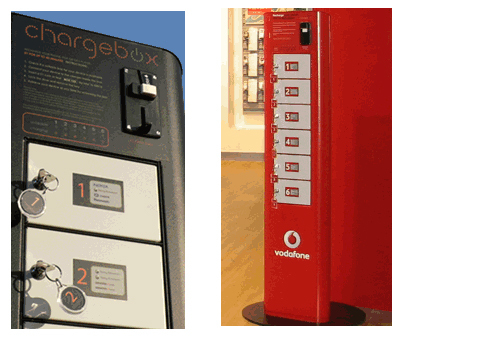 Don't you think it's a good idea? I can imagine them in office receptions, at train stations and airports throughout the land.

Posted at 10:43 in New Thinking and Ideas, Seen and heard | Permalink

That's really cool! I'd be extra impressed if they'd put an iPod charger in there, I'm always forgetting mine!

The best idea I've seen in a long time is the Solio Charger:
http://tinyurl.com/3arjtk.

It's OK having chargers everywhere, and it's certainly convenient, but not sustainable. (Why not add a solar panel to the top of the Chargebox when used outdoors?)

For those on the go there is also the Solar Backpack:
http://tinyurl.com/2lz7az

the first link I posted hasn't shown up correctly. It should be:

I could be going mad, but I'm sure the Leeds and Reading festivals have the Orange booths too; there might have even been one for iPods as-well. Alas, high quantities of alcohol may have induced dreams of a happier, fuller battery, time.

I remember seeing one of those in a restaurant in Stockholm some 6 years ago - they seemed very useful, as half of the people in the restaurants just left their phone there to charge and be at peace while eating.

In Tokyo there are a lot of these cell phone charger station, usually at the convenience store. If I remember correctly, you charge them for ten minutes. They also have these disposable batteries which you can attach to your cell phone. These seem more popular, especially when you miss the last train home.

Though the ideas of having them in restaurants sounds cool.

wow! I could go on and on about Japan and its charger stations there are so many different kinds and all over, if your battery goes in Japan you have to walk about five steps before you have come across a place/thing to charge it. I laughed when I read this post as it reminded me just how far behind the U.K is on things like this. It is a great idea, but one that is very very very old.

Have you seen this in Japan?
http://ewarwoowar.typepad.com/25letters/2007/04/japanese_unific.html

That's a fabulous link, thanks Amelia.