The second longest review yet of Interesting 2007*

That was bloody good, wasn't it? 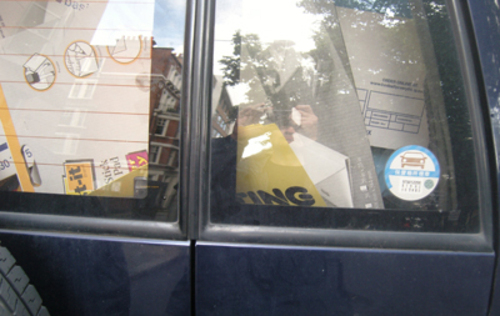 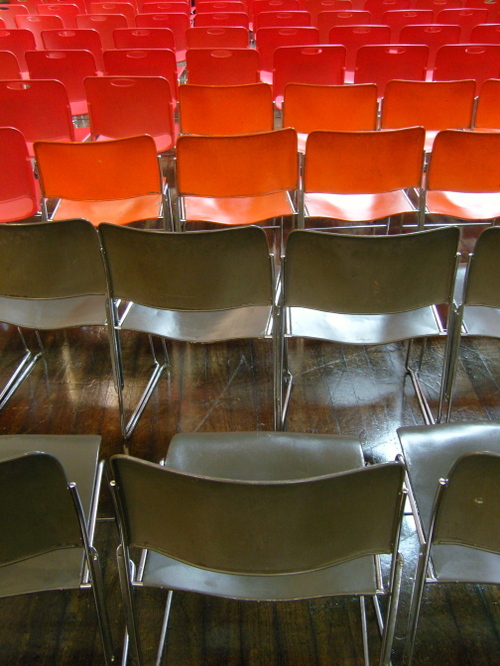 The Hall was beautiful. It seemed to be constantly bathed in a lovely dappled sunlight. It wasn't of course, but it just felt that way. The bunting was great. The colours of the chairs perfectly in harmony with the hues of the soft drinks and the wooden floor. That kinda colour co-ordination takes a lot of hard work.

The really nice thing about Interesting 2007 was the attitude of the thing was matched by the attitude of the people. Easy going, happy, grateful, friendly and pliable. Everyone and everything; pliable. I thought everyone just got it. Nothing needed explaining. No one needed telling. Everyone found the right way to do things. 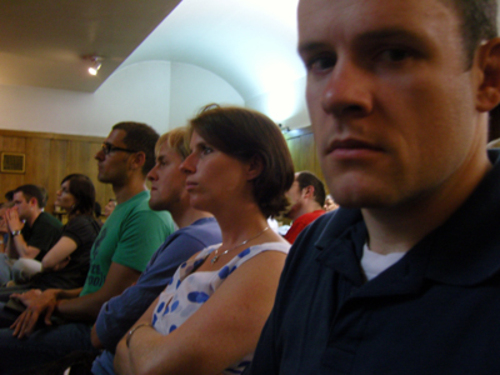 There were some really lovely touches. In fact they were everywhere you looked. And it wasn't a PlannersphereWankFest either. Whilst there were lots of people who knew each other, there were loads who didn't. Which was a good thing.

Going back to pliable, the British randomness of the running order worked like a dream. You couldn't have planned that. In fact it's the kind of thing that would have been destroyed by a committee sat around trying to plan a Muppet talking after the editor of The Spectator. It just worked because it just worked.

It was great to see people collect their tshirts. People were really pleased to get them. That was nice.

People loved the vinyl too. 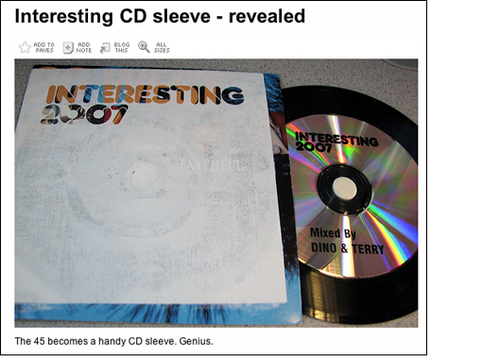 Personally I loved the three minutes talks. They had an energy that is missing from all traditional presentations and conferences. I found myself saying that the 20 minute ones were too long, but that's an absurd thing to say. The different pace of the speakers was really charming too. 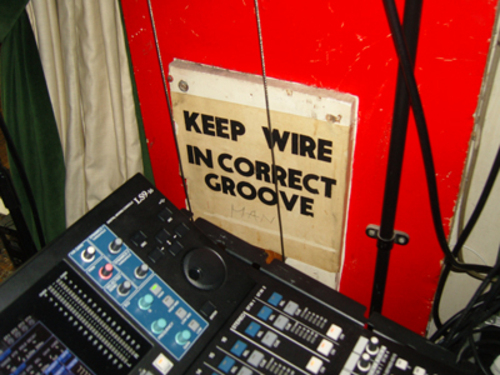 I can't write about all the speakers. I'd like to, but I can't. Really, I can't. So, here's my Top 5. It's my personal Top 5 and in no way means that someone I've missed was rubbish. Someone's gotta be 6th, as Enid Blyton used to say. 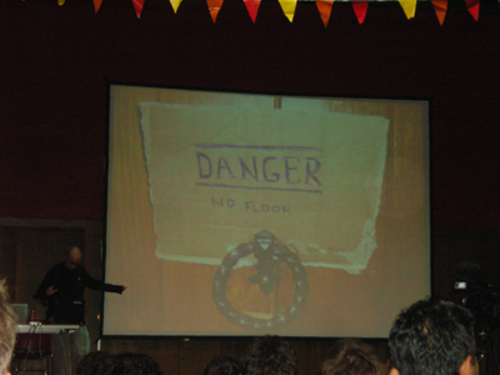 1. Dave Funny Pancake Showed some of his brilliant photos. Just side splittingly hilarious. He could still be speaking now and I'd still be laughing. No big tricks, just 200 photos and humour. Genuine fun for all the family. He should tour. Brilliant.

2. Rhodri Marsden Played the saw. Or rather he made that saw sing to within an inch of it's jagged life. In a good way. Watch the video here. So good I played it over the studio stereo this morning. And again and again. And what a choice of song too. Brilliant.

3. Fiona Romeo Spoke about how they created The Science Of Spying exhibition. I really, really want to go to this exhibition but I keep missing it. So this was the next best thing. But more than that, I learnt stuff. The two second learning in public rule for example. Brilliant. And she used the logo in her ppt.

4. Anne I Like Was a 3D version of her lovely blog. You knew she'd be good didn't you? She was. David helped her design the postcards too. Brilliant.

5. Beeker - Shared what the Muppets and Ibsen had taught her. I don't really know/like the Muppets. And I've no idea who the Dutch bloke was, but Beeker really made this come alive. Touching without being soppy. In depth without being boring. Funny without being stand up. Interesting. Brilliant. 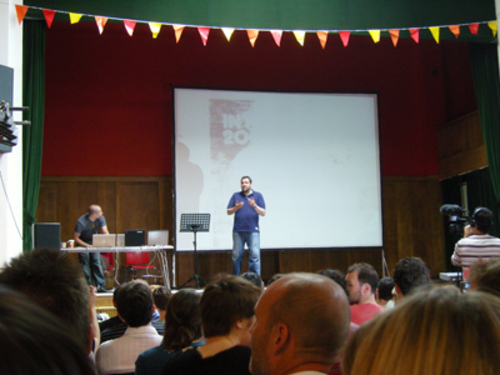 "You're all adults, it's only £20, so, you know, don't complain."
Russell asking the audience to be kind.

"That's Marcus. Do you know him, he's dead. Well, he used to be dead."
Clare trying to explain to a startled helper about Marcus.

"But I am dead."
Marcus' response when I told him the above story.

"Thanks. I'm doing a 20 minute slot."
Matt's response when I told him I thought the 20 minute ones were too long.

"The Muppets were only interested in the lower numbers."
Beeker telling us about Muppet snobbery.

I've got loads and loads to say about the graphics, but that will be another day and another post.

* The longest review yet of Interesting2007 sits nicely at here.

Can you spell my name right s-v-p?

Other than that, lovely review. Fiona Romeo was fab, thanks for posting her blog.

I can feel the excitement and energy all the way in NY! Wish I could have been there. Love the shirts. Nice job.

Claire, very little chance of that happening continuously. But I will try I promise.

That last comment would have worked a lot better if it was a reply to TomLR and not to Claire, don't you think?

I missed out on those vinyl sleeves... which is annoying as im probably one of only a few people there who actually owns a record deck!

Brilliant event. I look forward to seeing you, Will and Paul on stage next year ( I hope!)...

I'm up for some sort of performance next year. Morris Dancing, maybe even some chin balancing. Teaching a dog some new tricks, slimming advice in action, something along those lines. Painting. Maybe some painting.

Rob, email me your address and I'll send you one.

Tom, I'd like to see you teach a dog some new tricks. Do you think you could manage an old dog?

If you mean YOU Marcus - then I am absolutely positive that that is indeed the case.

Great, can you teach me to juggle. It seems to be the rage with the kids on the street these days.

Thanks Ben, will do!

Yes I can teach you to juggle. It's better face to face however so let's put it on the itinerary for our next meeting. I will also look into fire eating. I've got a feeling I know the secret to that one, instinctively.

As a smoker I think I can manage fire eating. Are you doing the agenda for the meeting or shall I? Would you like in done in Word or PowerPoint? I have Excel too.

I think we should do it in Powerpoint.
Point number one would be:

1. Greetings.
A round table scherzo. Bring your thinking caps. Nothing will be taboo. Indulge your wildest fantasies in this most dynamic of 'introduce yourself' affairs.

Do you have a beamer?

Maybe we could invite everyone, and flog tickets at 20 quid a pop?

I think there's an idea in there somewhere but maybe we are getting ahead of ourselves and concentrate on the font we want to use in the PowerPoint thing. I suggest ComicSans. That's a good one.

You can't do the design Marcus - you are too skilled. I can handle that. I don't have a beamer I have a Citroen, and isn't Richard Huntington a scary agency chief (maybe an ex-agency chief - or rather an agency ex-chief).

Now - on to the content. What are our objectives ?

ok, no Huntington then.

I'm rubbish at objectives. Can I take on the nouns?

Bloody hell, I don't know Marcus - I am particularly good at names, too. How are we going to divide up our mounting workload ? Am I holding onto the reigns too tightly ?

thanks ben for making sure that the chairs were noticed and photographed...

OK Marcus - I'm going to design a test for you. On faces. Just to see if you pass the 'meeting' test. Because if you DON'T, you can't come to the meeting.

It's harsh, but fair Tom.