Last week I was in America. I thought I saw a lovely, simple, classic, 'back to basics' can of Coke. Turns out I was right. Someone at The Coca Cola Company came to their senses (probably Coke's new North American design director Moira Cullen) and they've changed the can back to this classic, iconic design. Coke has a rich design heritage and should be a brand that's as revered as Volkswagen or Knoll. Should be, expect until last week it churned out this shit. 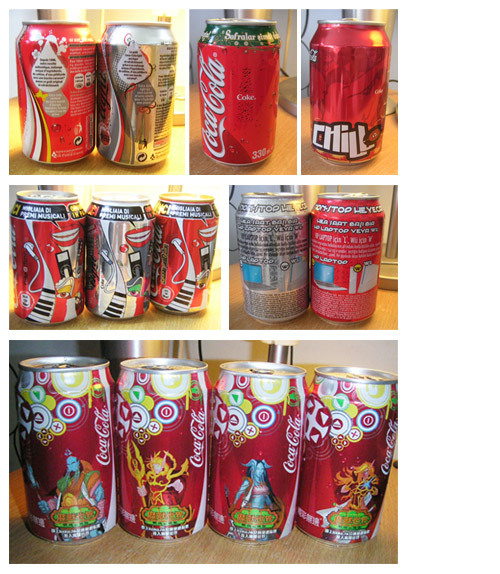 All Coke can images from Coke Can Gallery.

This is part of what Richard Williams brilliantly calls the "add more steam school of design". You know the type of thing, when they redesign a frozen meal and they make the carrots a bit more orange and they add a bit more steam to the photo. 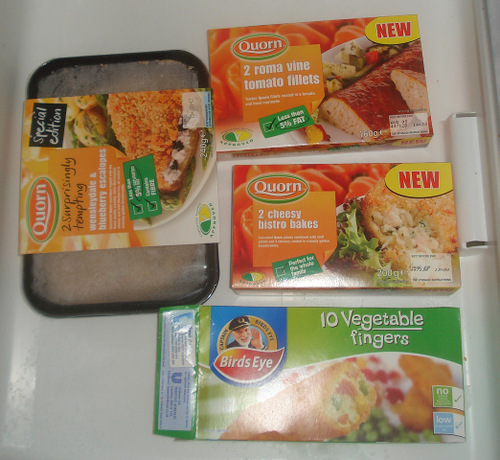 Coke has gotten rid of all this. This month's Creative Review carries an article on the redesign and they say, "No more bubbles, no more drop shadows, no more extraneous detail". Well, thank fuck for that.

Except there's more to it than this. The can now features only trademarked elements and the decision to go with this design was influenced by "modern print techniques that can produce very strong solid colours on the cans". In the age of the design remix and with IP being rightly heralded as the future revenue model for designers Coke has found that the original design still achieves stand out and clarity.

Designed by Turner Duckworth, Coca-Cola believed "by over complicating its visual identity and packaging, it had diluted its brand and come to look more like a generic soft drink". No shit, Sherlock.

The previous designs were awful, diluting all that heritage into an also run of mediocrity that you see so often. So often.

And this is why designers are (still) wankers.

If you Google Ben Terrett, one of the top results is a Podcast I recorded with Paul where I state that designers are wankers. Well, most of the ones I've met...

You see, designers are so often their own worse enemy (for the record I agree with pretty much everything Bruce says there). Bowing to clients worst requests, endlessly free pitching and constantly slagging each other off.

How did the Coke can ever get so far down this terrible design road? Who's at fault for those previous designs? The consumer? The brand manager? A bit, sure, but a lot of that blame lays with the designers. The guys that added more steam. More bubbles. More "extraneous detail".

Too often designers get tied up in the client forest unable to see the wood for the invoices and producing shit like the previous Coke cans. That's why every other soft fizzy drink looks the same. That's why WHSmith is a "haze of tit and bum and bright colours". That's why (most) designers are wankers.

(And by the way, this blog is two years old today.)

Heh. I'd say that it's the more likely it's the marketing team who are the wankers, and the designers just lack the balls to stand up to them. And I guess a lack of balls would make wanking pretty pointless. Or perhaps just endless... there'd certainly be friction burns.

Anyway, I'm looking forward to seeing how long the new stripped back Coke can design lasts. I give it... oh, six months.

And, um, designers are wankers because they're "constantly slagging each other off"? Pot kettle much?

Got to hurt that top result returned is us sitting in a cafe talking rubbish.

Nice post - I'm all for the heritage angle. Some brands simply don't need to keep changing.

Looking back though, it's understandable how it all happened. The 80s and 90s were all about 'out-designing' one another. It's only recently that the cultural turntable has received a design rewind: back to plain, classic, iconic, simplicity.

It's interesting though that we also have this rather bold hyper-psychedelic-cum-rainbow-optimism thing doing the rounds in design (and advertising) at the moment. A trump card that W&K have played on many occasions - from Honda's Grrr through to Diet Coke. Perhaps there's some kind of polarisation taking place then? But I'd sooner suggest dipping into the Diet Coke archive all the same.

Interesting post. "Classic" is a lovely looking word, isn't it?

That's a nice post, Ben. However I disagree with Alex - I don't think that word 'classic' looks right - not quite. It's too modern a font and too clean to be really classic. And if it was really classic at least the grammar would be correct, and it waould have a capital 'C'.

There I go on fonts and grammar again.

Why bother with the word 'classic', afterall it is coca-cola that is in the tin. pure & simple.

which leads me to the re-design. It is beautiful, so elegant but why has it taken so long to get back to this design? seems obvious to me.

Quick tip: if you're going to pick up on grammar, then you sure as hell need to get your spelling right!

Isn't it ironic how so many 'graphic' designers on NDG seem so obsessed with spelling?

I love that "new" coke can, actually that can has been used in japan for some time now. I'm that kind of design guy, and my bosses are always over me asking for more details, bubbles, reflexes...shit. ufff.

Anyways, congratulations on your blog :)

It's all about the bottle anyway.

I can't stand Coke, drink of the devil.

And don't even get me started on that 'zero' version - my tube station was covered with empty mini-cans last night, they were obviously giving away freebies. Poor cleaners!

I've been saying that Pepsi should revert back to their old white cans for a while now (with my non-design friends wondering why I should even give a crap), just clean, with not much else on them (much better than those god awful "submit your own design" ones they have at the moment, do they not know that metallic packaging looks dated now??).

It's one of those things, when you go into a shop for a can of cola and you're presented with either a ghetto ridden can of pepsi or a gleamingly elegant glass bottle of coke - I will always go for the bottle of coke (even though I prefer the taste of pepsi!!)

It's crap really, but I think most people do judge the book by the cover. The way they see it though there'd be no room to slap on a big picture of scarlett johansson or Dr. Dre...

Hurrah hurrah hurrah.
Much common sense from you, and at least some from Coke.

The simplicity of the logo and iconic branding is what makes Coca Cola so special. I find it unbelievable that they have taken this long to see it.

Looking forward to the terrible twos!

Happy Birthday! What a coincidence. Have some cake I stole from David The Designer.
http://itsnice.blogspot.com/2007/07/happy-birthday.html

A Pepsi bottel redesign would be brilliant - but I doubt we'll see it now Coke have got there first.

i'm hoping that with the rebirth of cool, there's also a renaissance for tab and mellow yellow.

You've hit on one of my pet peeves about product design here in the States. Every time I get a soda of any brand the darn thing has been redecorated from the last time I got it.

Likewise, every month I restock on feminine hygiene supplies, the packaging has been redesigned! This month some wanker has put flowers all over the bag and on the pads themselves. Eeeew and why?!

It's still a horrible drink.

I do like the new (if retro), simpler design that Coca-Cola has adopted for its cans; however, I'd really like it if Coca-Cola were to resume the so-called "harlequin" or "small diamond" design that was used on cans from 1966 to 1970. This look has been revived in Taiwan:

well. I'm not sure what kind of 'shit' you were speaking of, but I liked the other cans. the ones like this?

yeah, they were pretty. but what do I know?

Hey! let's hope Coke sitck with this "classic" can design for ever.

Because that'll benefit designers - it'll save them having to go into work and get paid to mess around in Photoshop doing a new coke can design.

Which means they get more time to watch TV and worry about when their next job is coming...

Hopefully, all companies will decide to stick to their "classic" branding, thus meaning mass unemploymenmt for an army of designers.

Which will be cool.