The graphic language of Interesting 2007

I want to talk about Interesting 2007 for a bit.

Not a review, not a discussion about the effect on the global conference market, just a few observations on the graphic design project. 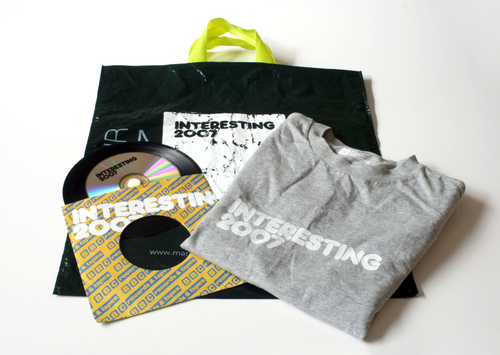 I guess we've all done work for friends or friends of friends. We certainly have here, and almost every time it's gone tits up. Or at the very best it hasn't gone very well. This was a big concern of mine when Russell asked us to help out with Interesting.

It's a fantastic project, really intriguing. But history tells us to avoid these projects like the plague. They always go tits up.

This one didn't. In fact, I think it went rather well.

So why is that? Although I don't really know; several reasons spring to mind. Possibly Russell is more used to working with designers than previous friends; although we've worked with people who have worked with designers before. From the outset we agreed a budget of zero; I think this is important, as free is very different from cheap. You can't beat quite good and free as someone once said.

On to the brief. The hardest part of this brief was to create something when nothing was really needed, in the traditional sense anyway. For a normal conference you'd need brochures, adverts, banners and all sorts of other bumpf. Interesting didn't need any of this. The tickets were already sold out before we started working on the project.

Harder than it sounds.

This is the little logo type we created. A proper old fashioned logo type. It's not a typeface (it was hand drawn) it's not a blurry symbol. It doesn't change colour. In fact it doesn't change at all. It's a mark.

It's deceptively simple, and at first it doesn't look that important. But look how hard that little fella worked. It was used in black, in white, and reversed out of a square. Just sitting there, not getting in the way, communicating clearly. 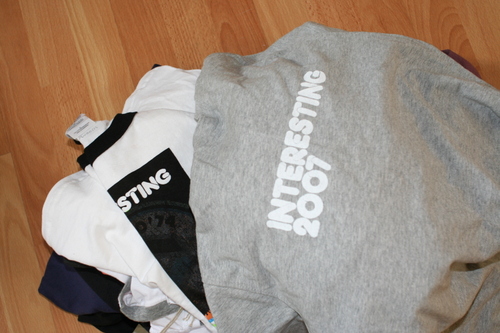 It worked on almost every colour known to plastics manufacturers, it worked on record sleeves, tshirts and lots else. (If 'lots else' is valid English.) 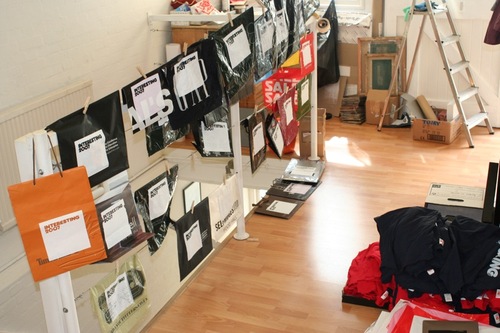 Our studio during an intense bout of screen printing.

Lots of interesting, exciting things happened that we didn't expect or we didn't predict. Early on Kingsley spent a day at home making screens and he emailed them into the office. 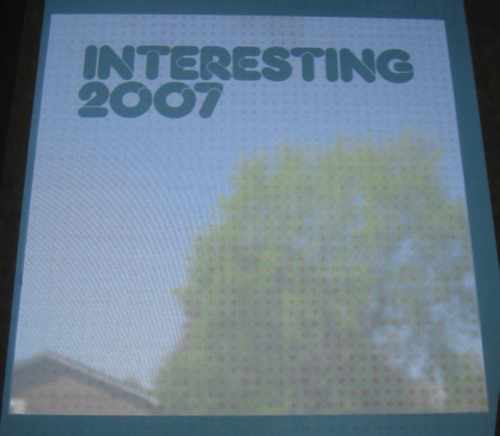 One day Razvan popped in and helped us take a few pictures. We were constantly testing the screen on different substrates. Out of habit, I uploaded all of these pictures to Flickr.

And then Russell started using them in blog posts. This is what I'm going to call the visual language spilling out (because I can't think of a more sensible expression to describe what I mean). It's all there, you recognise it as Interesting 2007, it all fits, it's all on brand... and yet there's no big identity manual, there's no brand manager, there's no marketing plan.

Quite close to the big day Dino rang and donated 350 CD's of a mix he'd made. It seemed appropriate, interesting and (sorry) on brand to reuse 7 inch singles. We bought 250 odd from eBay for about £5 and we traded the rest with our friendly local Oxfam manager. And so Tom and Kingsley created this fantastic CD holder. Here's that logotype again, just sitting there, not getting in the way, communicating clearly, adding to the thing. 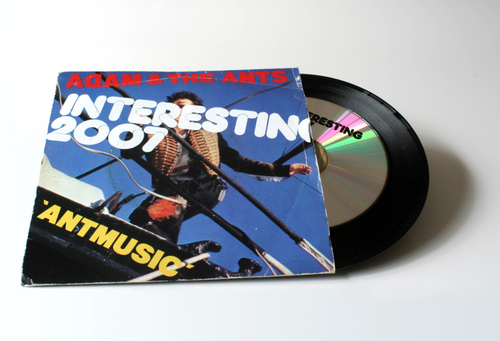 One aspect I found really interesting - as well as the 'official stuff', the tshirts 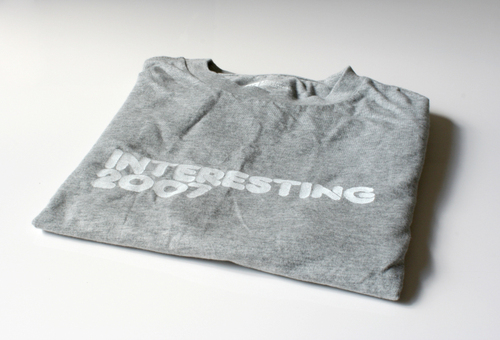 the bags and the CDs; 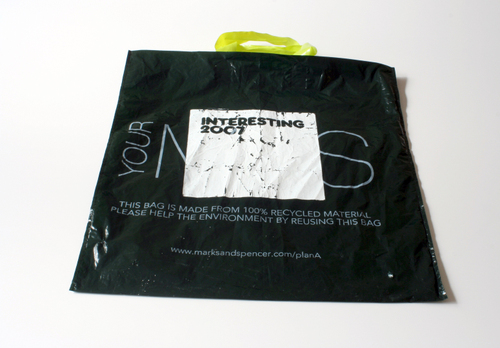 was the visual language spilling out into the day and into the far reaches of the blogosphere. 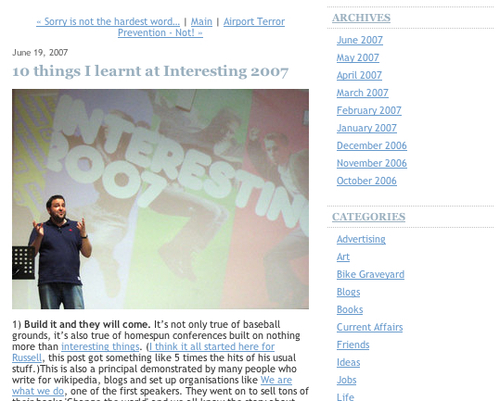 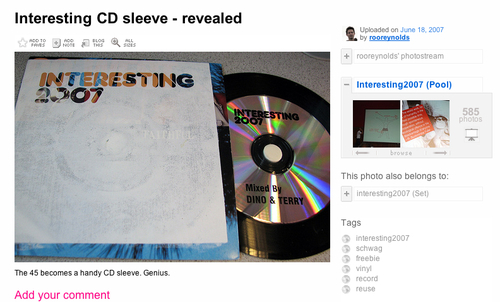 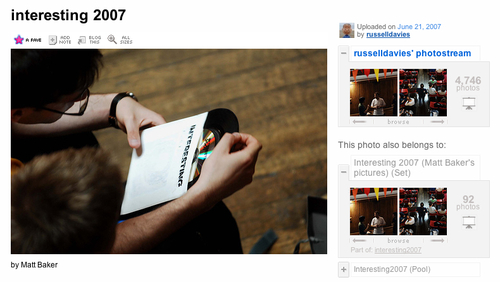 Here's Matt sporting the logo on his presentation and wearing his tshirt. Bonus points for that. 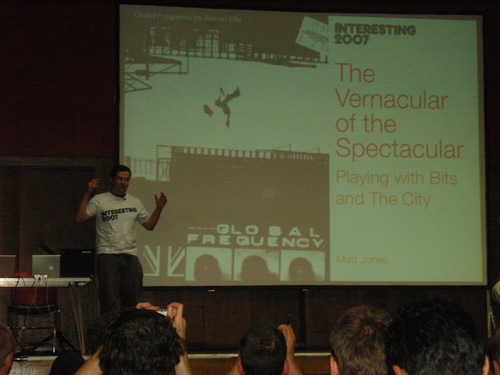 What's interesting for me as a designer is how the visual language seemed to take on a life of it's own. Even within our studio. Without instruction it spread in a way that was always totally appropriate. The designers biggest fear when having anything less than 100% control is that everything will look shit. This didn't happen, in fact I thought the randomness of the substrates, blog posts, Flickr pictures added to the richness of the project. Which was the idea, without being the idea. If you see what I mean. 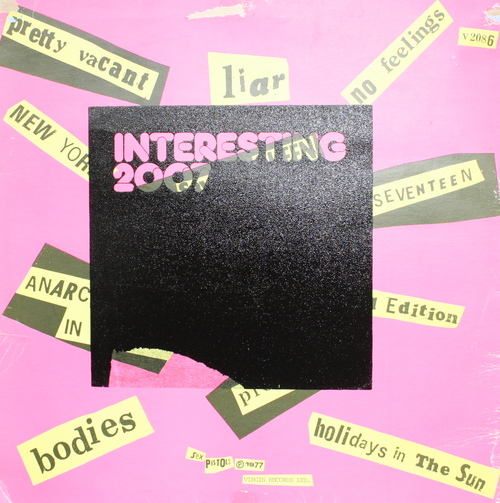 Russell and I had talked before about big brands allowing their logos to be remixed and allowing people to create their own versions of logos and graphics. I doubt if that will happen anytime soon, but I think there's some really interesting lessons about control here. It would be nice if a brand could create a true spirit or a 'way' for the graphics (not for the brand, but for the graphics) that was then allowed to be taken and interrupted by consumers, users and people. "You are more than what you have become" as Mufasa says to Simba in The Lion King.

There's also something very interesting about the reusing aspect. We didn't produce any new stuff. We added more value to existing things. That's not easy to do well or to do seriously, but when it comes off, again, it seems to be more than the sum of it's parts. Surely that's what a lot of branding is about today? Becoming more than the sum of your parts?

It was genuinely rewarding to see how chuffed people were to collect their tshirts. If you're a graphic designer you don't often see that sort of reaction to your work. 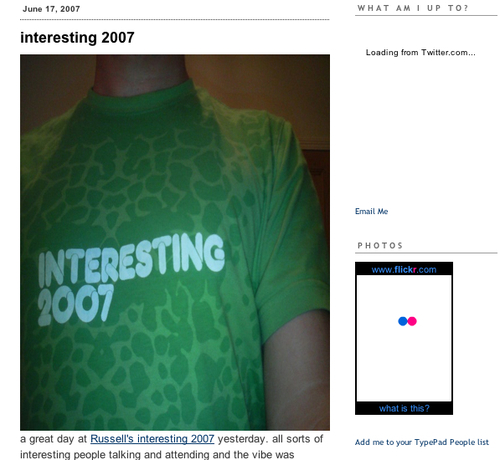 This is Dan Burgess' tshirt.

I hope there's a brand (a big, high street brand) that could adapt some of these principles and build something big and powerful without micro managing it. Surrendering control and gaining influence and so much more.

Posted at 18:10 in Interesting 2007, Sustainability In Design | Permalink

Awesome post, it was amazing to see all of these pieces come together so brilliantly. I've never seen a CD packaged like that, it blew me away.

(Did I already apologize 1,000 times for my CD manufacturer butchering the design on the CD itself with the "Mixed by Dino and Terry" printed in gigantic type? Sorry :( Again.

Very, very interesting - and a great post, Ben. Could I play devil's advocate and suggest that the successful outcome might be entirely due to the complete lack of a Marketing Department?

David, you could be right.

The free thing made a big difference. And I think Russell just letting us get on with had a lot to do with it too. Although he was worried sometimes: http://twitter.com/russelldavies/statuses/19839661

i think the fact that russell just let you get on with it is a huge factor in creating good, consistent work - when someone trusts you, or "just lets you get on with it", you aren't restricted by the fear of fucking it up, or defending it - everything is practically "allowed" to work smoothly!

The brand wasn't just the logo, surely. It was the overprinting, inventiveness, and refreshing of the old? The logo is just a logo.

wow. it's always fascinating to see how much work and love is going behind the scene and the fact that there was no "client relationship" must have been quite liberating.

keep up the great stuff!
A.

I really like the idea of reusing 7"s, and less waste in design in general. Great job!

It was great, and I think people appreciated it.
The identity matched the day perfectly, and was understated yet ubiquious.

I've read this post a few times now Ben - because I think that it really was a successful project and that there are things to be learned in what you say about it.

In fact now I think of it - didn't you put a post up about some branding work you did for the Southbank Centre which produced some very flexible work that could be applied to a multiplicity of (principally technological) means ?

I think it's the way you sold it that made all the difference: