« The graphic language of Interesting 2007 | Main | You know, internet, blogging, digital, and stuff » I've only ever had one guest post before and that was from the unstoppable Marcus Brown.

Here's another one. Tom, one of my partners at TDC, went to see The Haçienda exhibition in Manchester  last weekend and I thought you guys would like to read a little review and look at some pictures.

It all started with my sister, like all people with an older sibling, they tend to dictate what we grow up listening to. Being 2 years older, she was always first with fashion and music. The 80s were a pretty special time - and Acid House was my Punk. My sister had the DMs with big safety pins, oversized secondhand jeans and Smiley Face tees. She also had a boyfriend who was very into the scene, bought all the records, and took turns on the decks at the local sticky floored nite spot, and went to the Haçienda.

I was 15 when I first heard about the Haçienda - that was 1988, the 'Second Summer of Love', everyone had smiley tee's, jeans were getting baggier, mens hair getting longer and the sun kept shining. I struggled to get into most clubs locally - I looked so young even with fake i.d. they turned me away! I was never asked for i.d. ever to get into the Haçienda, once when being searched at the door, a bouncer took my passport (my i.d. for the night) from inside my pocket... "Alright son, where you off then, on yer 'olidays... Ha ha ha". Walk through the world famous Fac 51 doors at the Urbis exhibition and you get a really good display of what the Haçienda was all about, grouped both chronologically and thematically, it contains just about everything and anything from the history of the club. 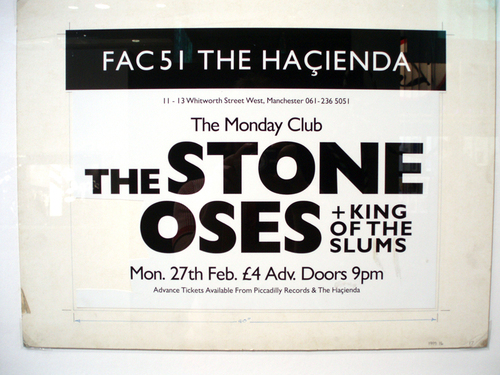 There is a really great family tree which links all the people and events back to the club. 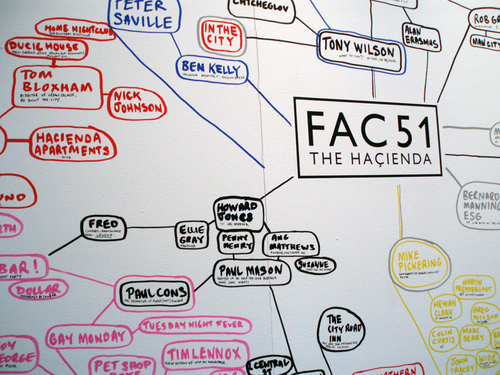 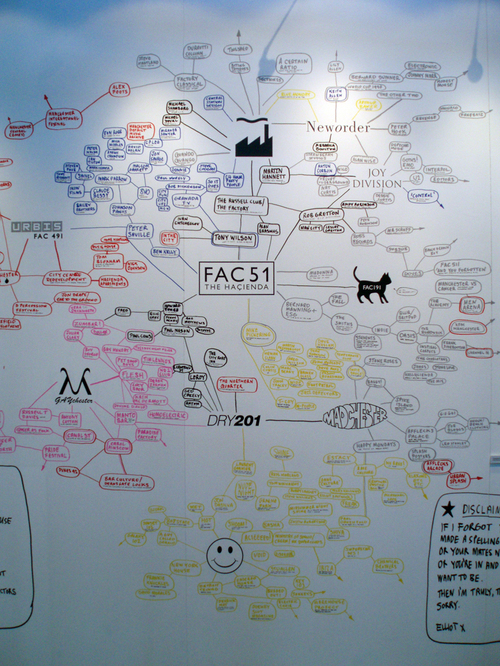 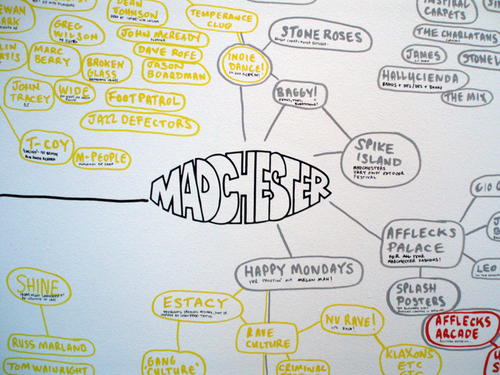 Previously unseen video footage showing the construction of the club, alongside a giant print of Tony Wilson, Peter Saville and Alan Erasmus,  a small amount of early Factory items, setting the scene for the Haçienda, and the visual style of the club.

You then get a great slice of design through the years, with early sketched visuals through to art work and finished items. Alongside the 2D items, there are numerous videos to view - a whole room is The Fall in performance, as well as original scratch videos by Claude Bessy and Swivel.

One of my favorite items displayed had to be the 'original' neon bar sign for the Kim Philby Bar.

I thought I knew all the design done for the Haçienda, but I found items I had never seen, one of which was the all gold poster for Haçienda90 - a lush print of gold on gold, no copy other than the title... 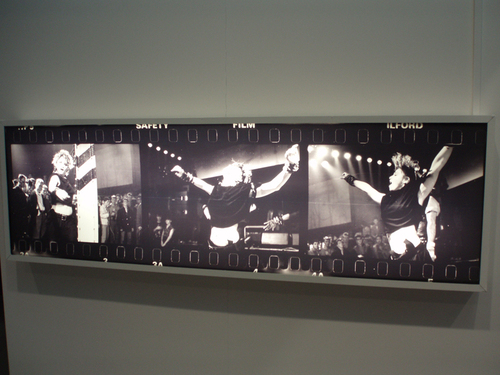 Also featured are light boxes with Madonna's first UK appearance, a wall of logos, axonometric drawings of the club and lets not forget - FAC51-Y3 The Haçienda 25th Anniversary trainers designed for Y3 by Peter Saville and Ben Kelly. 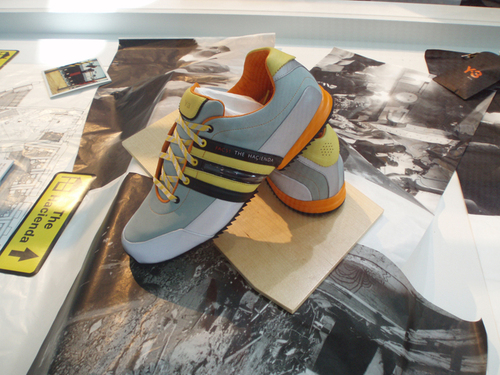 The exhibition also traces the impact the club had in shaping the economic and urban development of the city.

A final, nice tough was the graphics and items that were created for the crew working on the film TwentyFourHourPartyPeople - Crew tees, invites to after show parties and viewing of the premier. 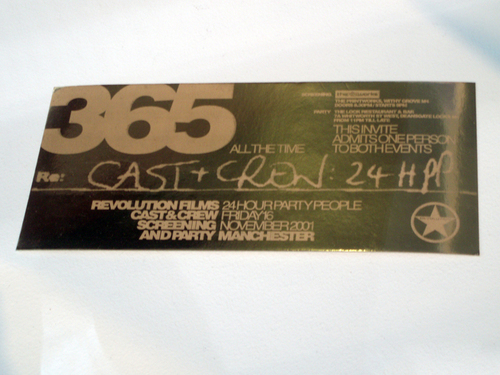 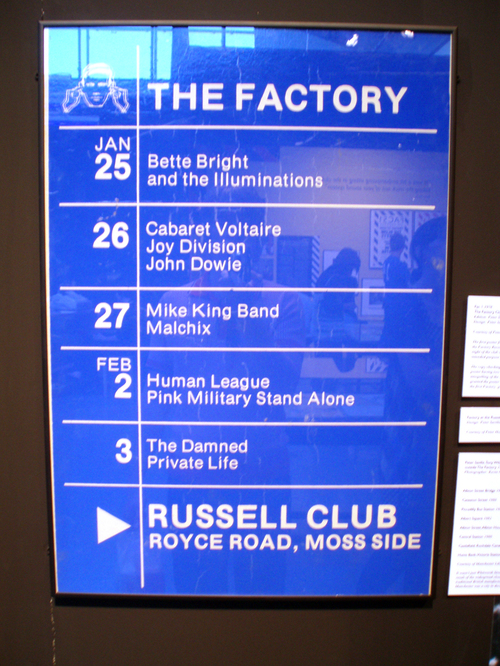 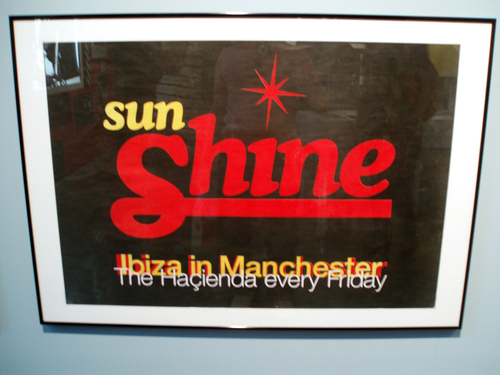 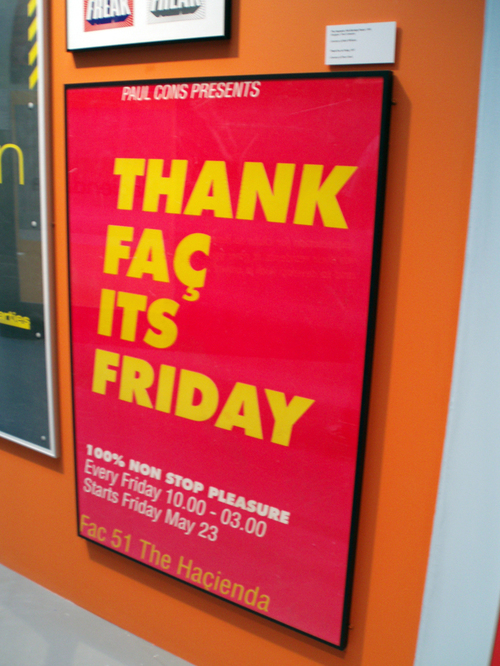 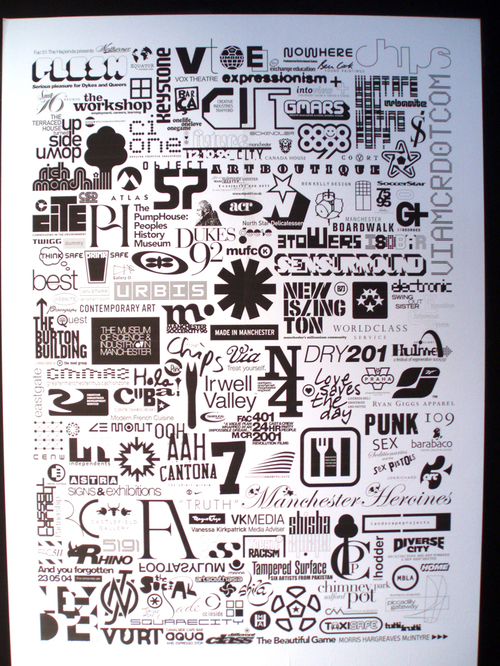 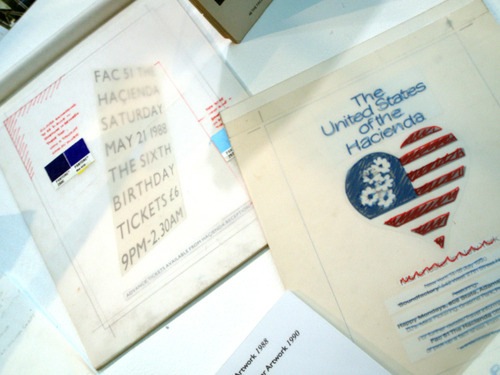 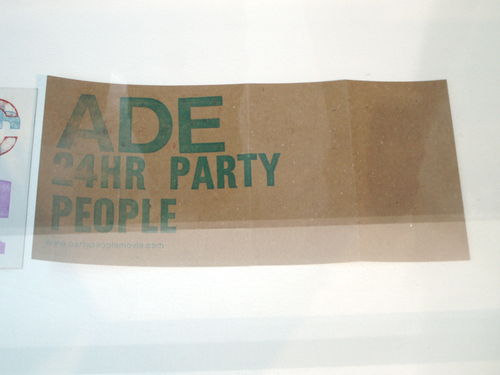 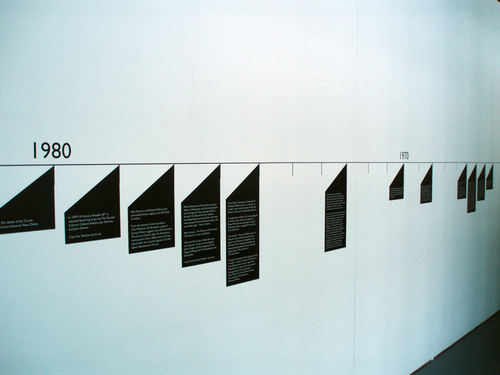 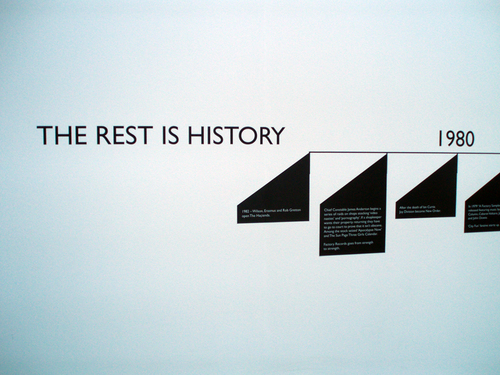 One of the best records of what it was like in those days I think is the WFL video: http://www.youtube.com/watch?v=q3svrd9OaIw

Brilliant! Thanks for including so many images.

Thanks Tom and Ben, a great post and very timely too.