Data, Branding, Web Design, Pouring Acid Into My Eyeballs and What Graphic Design Is For.

There have been about 3 posts in my drafts folder for ages. And then today, like Paul on the road to Damascus they've all come together in one delightful little package.

Everyone is very excited about data right now. Data is everywhere. Google are to blame for quite a lot of it, but so are things like the Freedom Of Information Act, the Internet, Andy Gray, Sky Sports and a whole bunch of other stuff we call the Information Age. Nothing new there. 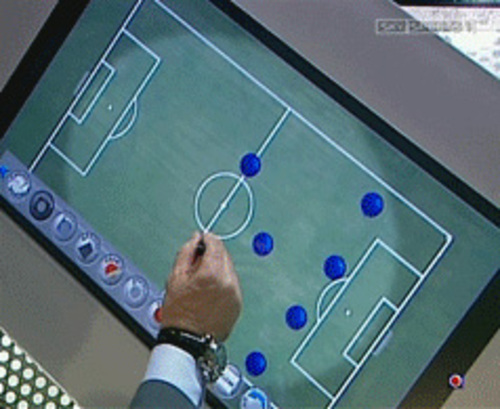 Just look at the watch in that photo.

Lets take a look at one of my favourite examples of this. On One Map. 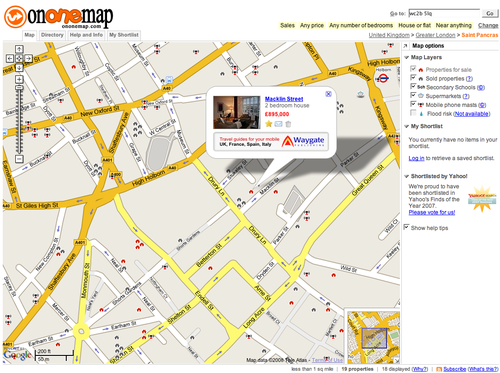 That site uses a Google Map and pulls in data from estate agent's websites and Government statistics. It can tell me there's a 2 bed flat for sale for £895k and four mobile phone masts 400ft from the office. All of this data is (sort of) freely available. I'm no Property Geek but what I love most about this site is how you can search for a new house by visible map rather than funny drop down boxes. So you can look for properties near Drury Lane rather than searching for <1-2 bed> <£500k-£1000k> <flat>. That map is a much more intuitive, easy to understand device.

There are some absolutely fabulous examples of data being redesigned in all sorts of ways over here so I'll steal a few of them below. 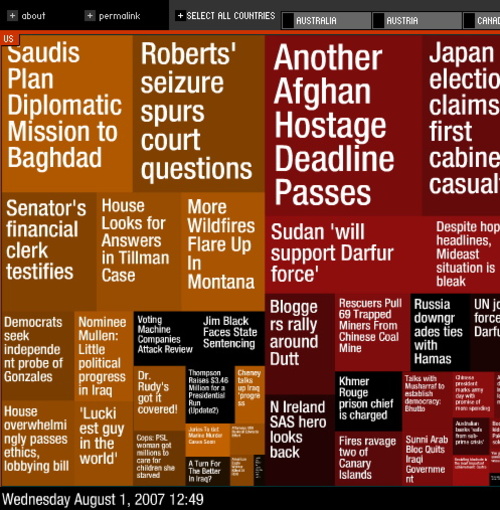 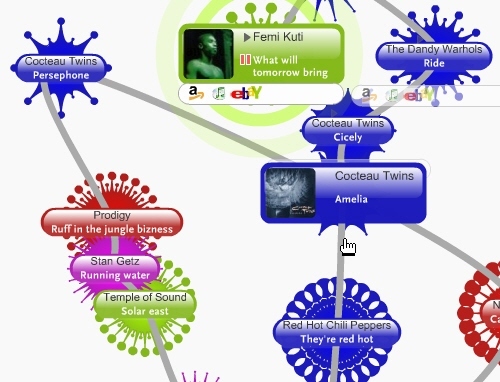 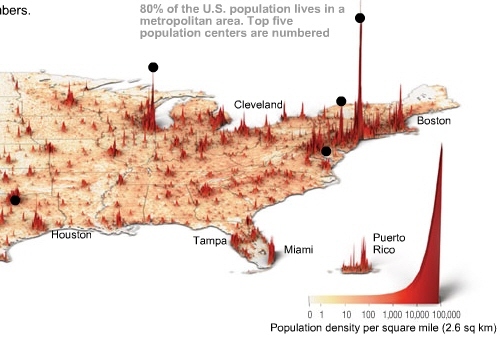 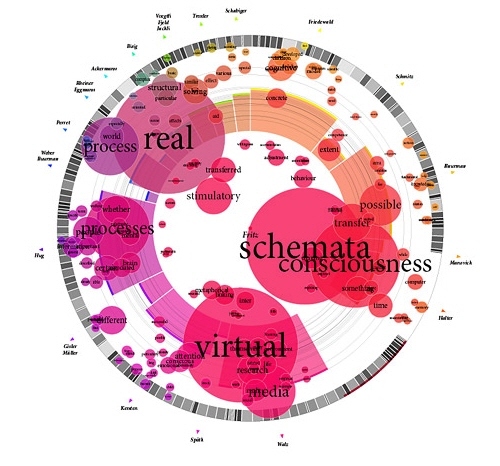 All data that's freely available to you or me. But it's not just online. Take a look at these gorgeous data representations from Global Cities exhibition. 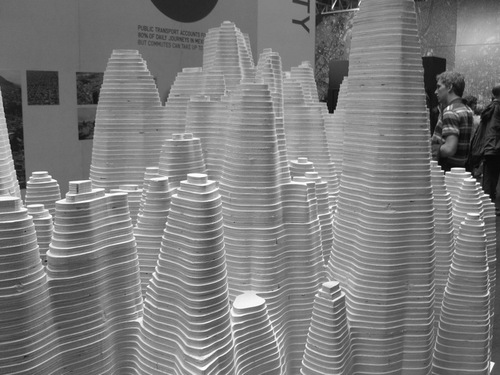 That's just some boring stats made to into a must see 3D thing.

And here's a film of Lisa Strausfield's model of downtown Manhattan in action.

It's just data. But incredibly beautiful.

So, effectively you can now get your data styled however you like. This is a huge step and has massive implications for designers.

Let's take something as ubiquitous as Google Maps. You could (nowadays) have a widget that printed off your map in the same style as an A-Z for Black Cabbies, in the style of a Beck Tube Map for Graphic Design Geeks and in the style of the Alliance to Restore the Republic for Sci Fi fans. That is not only possible, it's probable.

Where the users of Dopplr went last year. Borrowed from Matt Jones.

So this changes the game a little bit for designers and brand owners, because you could easily end up losing control. You might not want your data redesigned as a Tube map. But you can't stop this stuff happening so what do you do?

Obviously some brands (and designs, branding work etc) are already kitted out for this world.

Here's a simple example; imagine some copy from an innocent bottle written in a light serif font and then written again in a heavy mock Western font. Visually that would give off a totally different vibe, right? Yet it would still be unmistakably innocent. 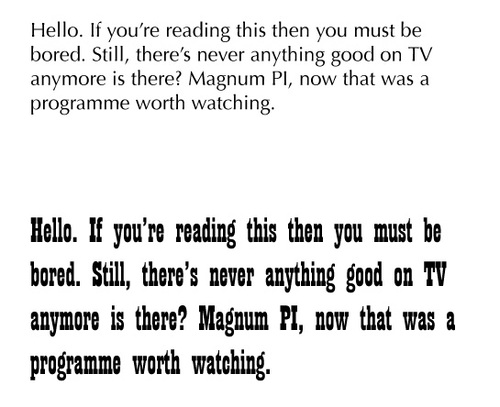 Likewise, The Economist can shoe horn that red and white into just about any form of media and (love it or hate it) it's still The Economist.

Orange - if they'd stuck closer to the path they started on - would now be the complete masters at this. Visual style, colour, tone of voice, it would all be set up in one orange pixel.

Becuase what we're talking about is proper branding. The kind of branding Wally Olins spoke about at the RSA in the 70's.

So it might be possible control the output of this data by cleverly structuring, or designing, the data in the first place. (Governments are good at this - all those expensive inquiries where the 'terms of reference' are so narrow only one answer is ever going to be found.)

But we're seeing this in more immediate, less expensive areas too. The humble RSS feed is a great example of how users can design your content however they want.

Some people say MySpace is "like pouring acid into your eyeballs" but what if it's just design by, err, non designers? Or is it design by a committee of 24 million? Whatever it is it's a trend and you're gonna see more of it. Take a look at this brilliantly comprehensive post by Michael Johnson on flexible identity schemes. Don't tell me that in at least one of those meetings someone didn't ask for "a MySpace"?

But it's not just data and identity it's the web too. Have you tried designing a website recently? Those things just won't stay still.

In print design you control the experience.

In print design everyone has the same experience.

In print design history is a reliable guide.

These things just aren't true in web design. People have different browsers, different screens, different font sizes. The conventions change from one month to the next, what worked last year doesn't work this year. Peole don't start at the start. There is no start. And so on and so on.

Designers have been told to worry about this for years, but only now is this era truly upon us.

In fact it seems to me we're going back to what graphic designers were originally intended for - wading through information and making it easier for people to take in. That's the difference between a designer and someone who just makes stuff look good. 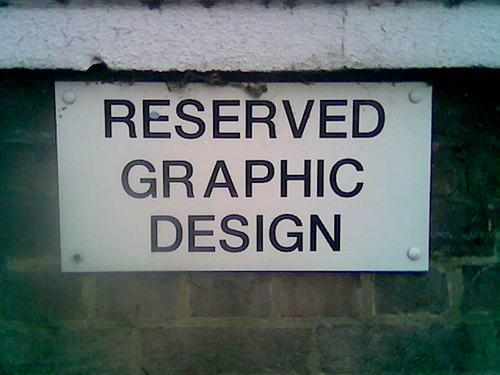 That's what designers have always been doing until everyone went a bit of track in the eighties and nineties (can you ever imagine David Carson wading through information and making it easier for people to take in?). Mabye the information age is helping bring back some purpose to design. Read this article about the redesign of the US road signage to see how valuable clarity in design is. 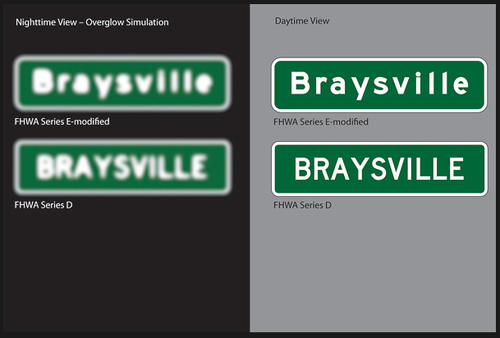 Which leads me on to one of my favourite things - hierarchies. Every good designer should be able to design a great hierarchy. Almost every piece of communication will be improved by a good hierarchy.

But I've probably bored you all now. Hierarchies will be another day.

I've only recently discovered your blog,adding the feed as soon as I read one of your articles, and your enthusiasm is infectious.

I do get a bit daunted sometimes, just by the sheer scale of how much great work is going on out there, but that's my problem.

Thank you for this!

It strikes me that a lot of this fits with the kind of thing Edward Tufte writes about. He's a bit of a folk-hero among the right sort of scientist; he specialises in technical infographics, which is kind of the distilled essence of some of the examples you're giving here.

I reckon there's a real overlap between cutting-edge science and professional design, but I'm not sure where it is - and who'd pay for it?

I like the way you've linked the repurposing of data with branding and design, particularly web design. Your definition of MySpace is pretty correct too lol... :)

Blimey, that's why Paul gave up his blog...he's on the road to damascus?

And I thought you were gonna say, "Blimey, that's why Paul gave up his blog...afraid of quality content like this."

I mean the other Paul. The religious one.

Where is the other Paul? The colourful trainer wearing one?

I'm pretty tired of all that statistical data. But information is very important nowadays, you are right.
http://astra-design.com/services.html

posts in my drafts folder for ages. And then today, like Paul on the road to Damascus they've all come together in one delightful little package. web design

I always love to learn new techniques and trends in design and technologies, follow me... web design hyderabad