« Creative Effort | Main | Data, Branding, Web Design, Pouring Acid Into My Eyeballs and What Graphic Design Is For. » 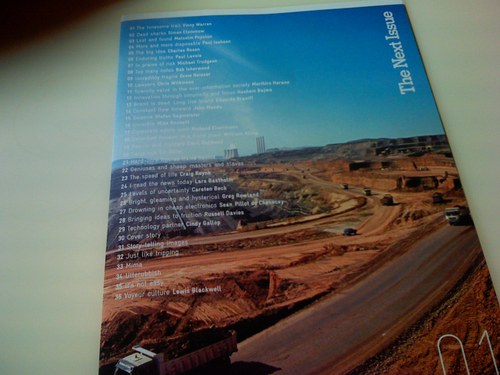 I got this magazine the other day. It's called The Next Issue.

It's not just a magazine it's a whole new thing. "The Future Department (who have but together The Next Issue) is a growing network of interesting people from disparate creative and business disciplines. The Next Issue is their magazine."

Now, I'm aware all that above sounds like total bollocks. But it isn't.

Firstly The Future Department  / The Next Issue is run by Alex West. Alex is a clever, hard working, and unbelievably well connected bloke (he used to organise the Future Marketing Summit).

Thirdly the magazine has articles by John Maeda, Will Alsop, Anomaly, The Sag, Digit, Imagination and Taxi. All good, very good people. It's also available as a PDF. I think the idea is to end up with just a PDF or some digital format. Click on The Future Department above for the online version.

I'd said I would write something but I didn't get round to it. Kicking myself now. Which reminds me of a bloke I know who once told me that he'd been invited to sit on a panel at the Royal College of Art. He turned up for the first panel but didn't bother for the second. He missed the third session and then he received a letter saying they'd kicked him off the panel. From that day on he vowed two things; to never accept a place on a panel unless he knew he was able to make every meeting and to take things he'd volunteered for seriously. Good advice.

I shall have to look for that, it seemed pretty interesting.

o0o0oh. I've not seen this yet. Who wrote the Imagination piece?

I think it's Eduardo Baniff (spelling?) from California?