Via the wonderful Design Disease Flickr Pool I stumbled upon this interesting little story. 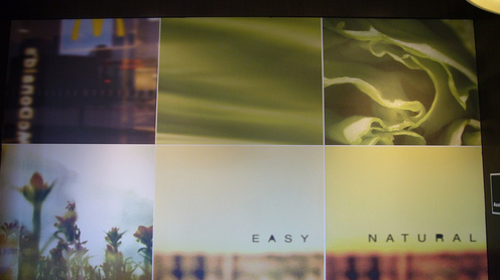 Photo taken from create_up with permission.

That picture above was taken of some wall artwork in a McDonalds in London. It's startlingly similar to David Carson's artwork for the Nine Inch Nails album The Fragile.

You might think they don't look that similar. But take a closer look. 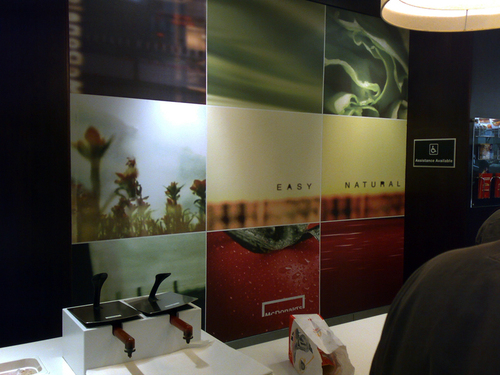 And here's some detail highlighted. 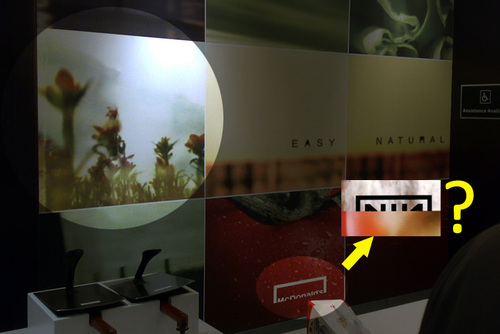 Photo taken from Echoing The Sound, usual rules apply. The arrows/highlights are theirs.

Look at the McDonalds logo. Have you ever seen it cut up like that before?

Now look at the on body artwork from the CD. 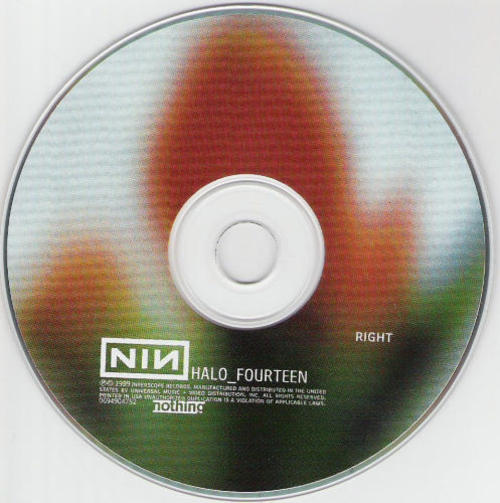 They even used the same photo haven't they?

This isn't just in London, it's in McDonalds globally. It's very odd that McDonalds would choose to copy NIN artwork from '99. And it's terrible that they would copy artwork in the first place.

That's horrendous! It's probably some junior had a 'great idea' and no-one else in the in-house office likes NIN so wouldn't have clicked. It's so difficult to do anything about it though - the company I work for has a major copyright problem at the moment and there's pretty much nothing you can do. All you can really do is carry on being fresher and better and leave them behind, looking tired.

Happens a lot more than you think I would imagine. Lazy designers flicking through design books with a deadline to meet.

Look what Paul Frank Industries did to a poster designed by Trickett & Webb.

I absolutely agree. You can also 'spread the word' around the design industry (and given the source the work - around the music industry too) so people are actually aware of what's happened. If McDonald's don't pay the price financially they will at least be known for plagiarising and thinking its OK.

Whether that will disuade people from buying Big Macs is another conversation though.

>Vicki Brown: "some junior"? why can't seniors be lazy motherfuckers too?

This is obviously terrible and Im not condoning it but for the sake of debate...

Q. Would you rather look at some terrible original graphics while you eat your soggy burger? or At some half-decent copied graphics?

In a perfect world the best of both would be nice and should be the norm.

Saw this a few months ago. The cut in half logo is the real giveaway. It does happen all the time though - in my workplace for one much to my annoyance. I thought the Sony Bravia / Kozyndan saga was a much worse public ripoff. A few months after Kozyndan are asked to submit work, Passion produce the advert and deny anyone there had ever seen the work? Come on...

David Carson, nobody’s sentimental favourite, might not own the copyright to the allegedly-infringed images.

I'm not condoning what the guy did, but honestly, Carson has been imitated so much over the past 15 years, I'm not sure this is any different than any other time. I don't think he can do anything about it. (Not to mention that anytime one uses stock art, they run the risk someone else will use the same image.) What about the guy/gal that first came up with the multi-flower-embellished silhouette element? That person should sue every graphic designer in the country.

Looks a clear copy, but is it any more a copy than other things we see everyday.

Both David Carson and McDonalds suck, so what's the problem?

hahaha.... this is the work of a person who wants to get things done quick.. just like ordering mcdonalds..

Vos: How many books on graphic design have you written?

The typeface and spacing for "easy natural" are very similar to those of "the fragile" as well. It's an obvious rip. Something I'd expect from a lazy design student, but never in (as you say) designs for a large corporation appearing worldwide.

I doubt Mr. Carson took the flower photos. The photographer is who should be taking legal action. You can't very well sue for stealing design ideas- happens all of the time, but not crediting the photographer is is the issue in this situation. Additionally, I sure hope Mr. Carson had permission to use the photos in the first place... I hear there has been trouble for him with that in the past.

actually your flower doubt is quite wrong.
if you look at mr carsons last book trek,
youll see he took ALL the photos for the fragile
cd packaging. and he copyrighted them.
get clued in and stay tuned.