« David Carson spotted in McDonalds | Main | "Be compact, be brave, be confident. And keep your fingers crossed." »

The internet is not your friend (for a moment)

I was forced to get a bus earlier today (normally I'm a black cab man, but you know...) and I saw this lady furiously working her Blackberry. 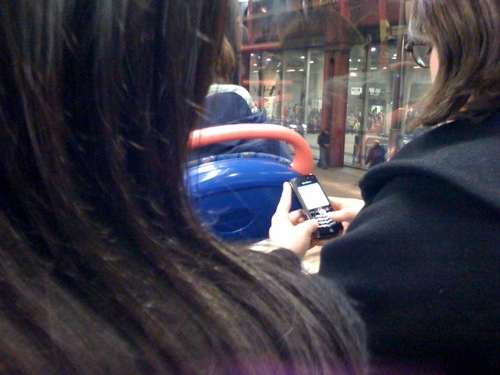 Being rude and inquisitive I peered over her shoulder where I could just make out she had received an email that detailed "nine points for the way forward". This email had been sent to at least nine people and maybe more.

But don't worry. I was just having a moment.

But I completely agree! Why not look out the window and enjoy the view?

Kevin, the view probably is quite boring if you travel the same route everyday. A beep beep on the mobile creates a little excitement just for a few mins then back to traffic and the thoughts of todays agenda.

I'm surprised you're not used to this by now! I agree that it's a sad state of affairs if that's how she communicates most of the time, but if it's just one aspect of her social life I'd say it's normal. Vulnerable moment for Mr. Terrett?

I wonder what was wrong with the other 7 points...

An interesting post. Not only does it reassure me that the next person to peer over my shoulder will be a graphic designer and not a mugger, but it also highlights an issue I have regularly.

What to do on public transport.

Of course if it's a commuting journey, then chances are we've seen all the sights before... including the people. So do we look out the window for inspiration? What about reading a book? It's the perfet time - but what if you miss something outside! Sometimes it is the perfect time to drop a few texts to people - although I do resist the urge to spend every minute on the phone. Or what about just putting some music on and getting lost in the moment?

How do you spend your time in the black cab, ben?

Is that outside Waterloo station Ben?

Not to be nosey. (Well no more than reading someone's emails!)

Did you have to get a bus because you were late for breakfast?

If it was an iPhone and not a Blackberry would you think different?

at least she wasn't yelling on a cell phone trying to be heard over the bus noise.