On Friday I flew into the brand spanking new Terminal 5.

Seeing as you've asked my flight landed 10 minutes early, my baggage wasn't lost and I didn't feel the need to swear loudly at BA staff. But this a graphic design blog and not Lonely Planet, so onwards and upwards with the infographics reviews. 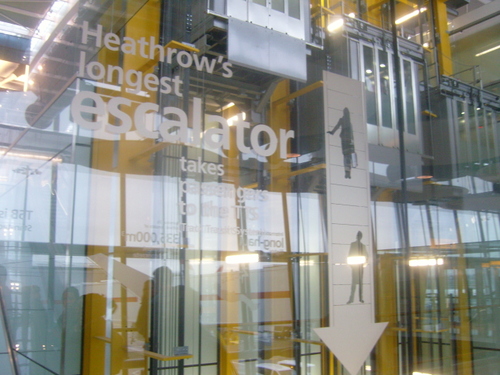 I flew in from Romania and funnily enough when we were there we cited infographics as a huge trend in graphic design right now. The new T5 is full of them. 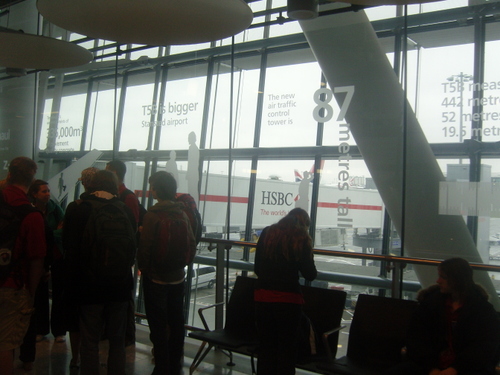 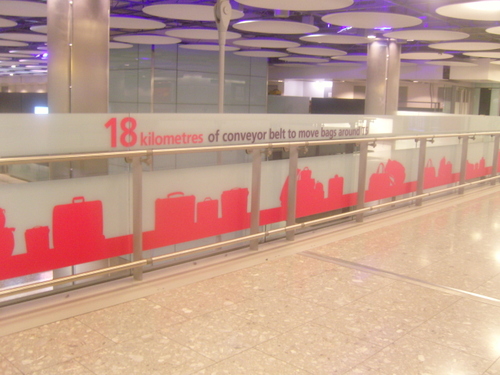 Already they look dated. They're not brilliantly designed and they just feel dated (all those silhouettes?). Surely the information will date super quick too? (Imagine if T1 said "we're the only building in Great Britain to have two escalators running side by side.) There's a lack of future proofing there. Plus - who cares how long the baggage conveyor belt is? 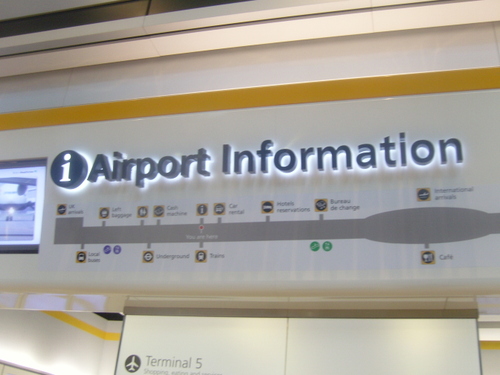 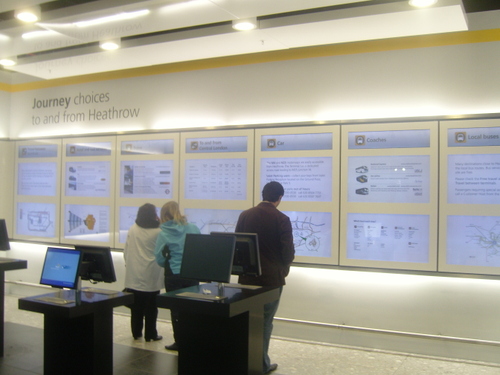 There's even a whole infographics pod!

I know this kind of information (how do I get to Central London etc) is very important. But it seems they got a little carried away with the screen and the use of English over symbols. It all looks very futuristic, but it isn't. Look at the amount of text on those screens. And as far as I could see the screens stay static. 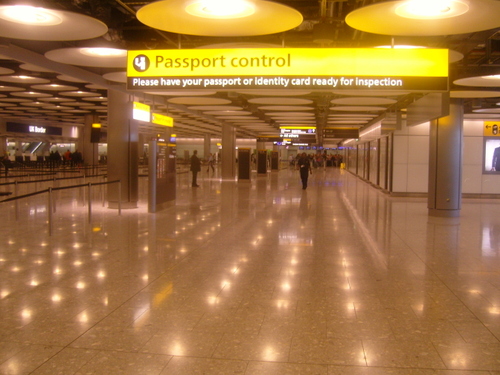 The spaces are huge and the signage is small. Shortly after being told off for taking this photo I got told off for walking into the crew Passport Control area. If only they'd seen my bottle of Evian I could have been in real trouble. 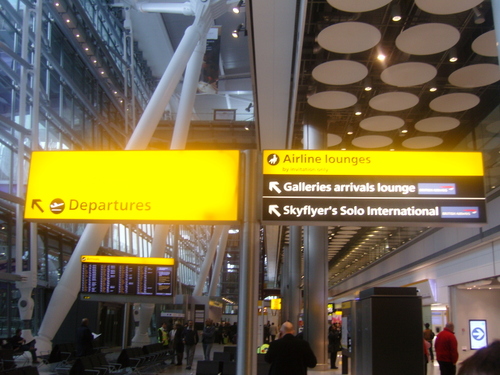 Those yellow and black signs, are they official airport signage? I seem to recall reading that they were. Is that right?

They work and they look good, but it all feels a bit hospital. A bit too official. There's no wit there, which would be fine but then they're not functioning that well either. They're like new versions of the old signs. No one has taken the opportunity to rethink the signage they've just carried on as they were before.

That sums up my whole feeling about the airport really, it's a version 2 of what's been before. Nothing new, no big leaps ahead. It's a cleaner, bigger, shinier version of T4. Which seems like a huge opportunity missed.

A few more pictures over here.

There's been a subtle change in BAA's signing over the last year or so — I can't quite recall when it started, but I'm pretty sure the font they're using in T5 is different from that used in most of their other locations. The last time I came through T4 there seemed to be a mix of old and new.

The proliferation of infographics echoes the stuff done by TfL — the 'last time this escalator was replaced the Beatles were at number 1', for example.

Good point about TfL Peter. I think the TfL ones are better for three reasons.

1. They make good use of the hoardings/barriers of the stuff they're covering up.

The stats, and cutout figures do all look very dated don't they. Not really that good at all.

The stuff etched on glass reminds me a lot of my ropey GCSE graphics project which I've bravely put here:

If you go to the Terminal 5 official website, the maps show everything retail but fail to indicate where the gates are.

And it won't be (or at least won't seem) clean and shiny in a few months' time.

I was at the new Eurostar terminal at St. Pancras at the weekend too.

I am a huge fan of architecture - and victorian stations figure highly on my list and so and was hugely looking forward to going to see the new shed.

Considering how much money they spent on the terminal too, surely a bit more could have gone on design ?

Surely the USP for conveyor belts is that they are as short as possible so your bags arrive quicker/at all?

I agree the infographics look dates already...the stats will date quickly, and it's also pretty limited in that it presumes all viewers can read English! Not a great message for an international airport. They should have went with a clean, simple graphical approach instead.

Copenhagen Airport is pretty cool, I sadly don't have any photos but I remember long walls of art installations and cool pieces hanging from ceilings...and it didn't require a knowledge of Danish to appreciate it.

At uni I did a project on hospital signage, and it had been found that black and yellow produce the best contrast for visiblity and legibility, which is why they use it in hospitals and airports, to try and speed up the communication.

But i agree that they used too much type.

The directional signs look like they were just removed directly from Amsterdam's Schiphol Airport. Which, historically, I guess they were, according to this:
http://www.mijksenaar.com/pauls_corner/index.html

I spend so much time in airports it's depressing me sometimes. Whether it's Manchester, Heathrow, CDG, Schiphol, Munich or Otopeni (where you probably flew from :P ) or others around Europe...this terminal just says 'depressing' judging from your pictures and others on the internet. It's all about big, long, many to pick from, this way, tall, wide etc. I'd say big effin' deal if you ask me, it makes travel depressing (in Belgium they have signs that say how long it'll take you to walk to a certain gate from where you're standing) in a way... an airport isn't a place I just LOVE to spend my time in, it acts as an intermediary between me and my holiday or my destination, whatever it might be. It's suppose to be pleasant if your flight gets cancelled or delayed and I can just picture the amusing photos in newspapers of people sleeping on uncomfortable seats waiting for their flights, big f***-off typography in the background saying '18km of conveyor belt...in case you felt like waiting some extra for your luggage after your flight got cancelled'.

It must sound like a cynical point of view but airports are known to be sources of bloopers worldwide. They're the places you end up when you should be at your mum's/wife's/kid's birthday and probably the target of most swearing and frustrations.

Schiphol is all about 'nice but don't get too used to it' - while it all looks good, design is 'loud and clear', the female announcers go 'Mister Whatsyourface, please proceed to gate 44, you are delaying the flight. We will proceed to unloading your luggage.'

Hospital is really a nice thing to say about it!