This is the William Morris pub in Hamersmith, which is neither useful or beautiful. 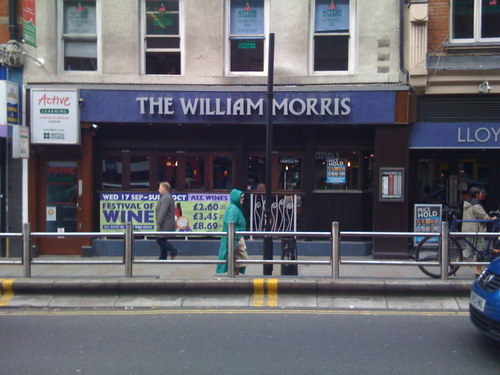 Which is odd* because William Morris famously said, "Have nothing in your house that you do not know to be useful, or believe to be beautiful”.

Here's something else that's neither useful or beautiful. Introducing the modern day Useless Saucer. 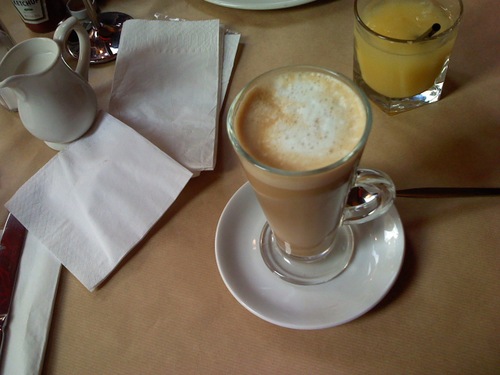 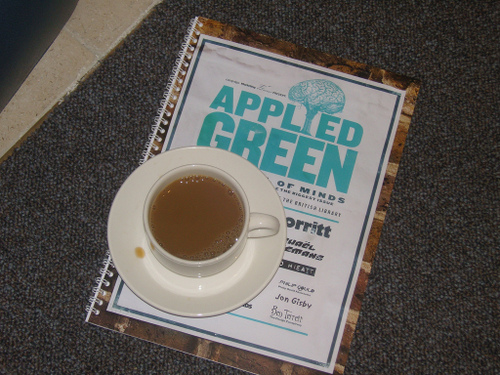 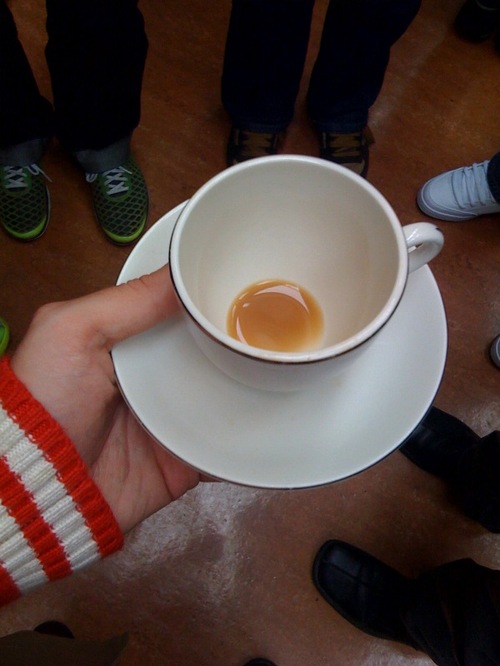 Another one that annoys me is the Table Too Small Useless Saucer. This is especially annoying when you've got kids. Waiters have a habit of putting the most dangerous part of eating right in front of the kids, boiling hot coffee, sharp knifes or open bottles of wine. This problem is exasperated by the fact that the table is short of space. This problem is exasperated by the fucking useless saucers. Look I made an infographic!

I just don't see the point of these saucers. 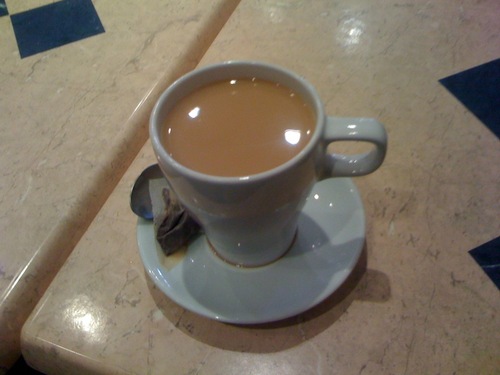 The point isn't to hold the tea bag, you should take that out beforehand. Obviously. And the point isn't to look good either. If I went round my Gran's house I would expect a cup and saucer like this. 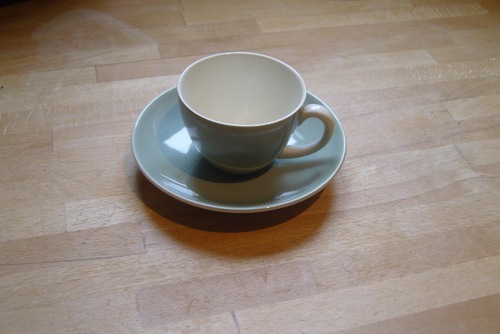 But in yer modern day coffee houses you get this hideous hybrid. 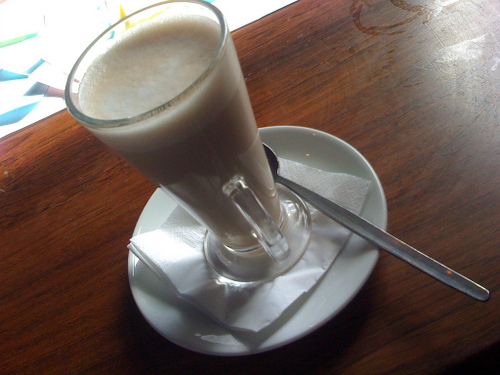 It's like they've used a trendy coffee glass and then thought, "Fuck! We forgot the saucers! The Englishmen will be revolting!"

But no one cares anymore. David Cameron doesn't wear a tie. Traditions change. And anyway, my Gran doesn't go to Costa Coffee.

I also know that saucers used to have a point. People used to pour tea into the saucer and drink it from there. That way it was cooler, quicker and you could slurp at it which aerated it and made it taste better. I know that because Richard Seymour told me over lunch. He knows lots about saucers and you should expect some exciting saucer news from his direction very soon...

Until then. Unless you're a Grandparent ditch the Useless Saucers.

In a little digital natives / silver surfer crossover thing I've been posting Useless Saucer pics to Flickr for over a year now. A few months ago my Mum and Dad went to Venice and uploaded pictures of all the "Useful" Saucers they saw to their Flickr account. Bloody digitally literate piss taking parents. 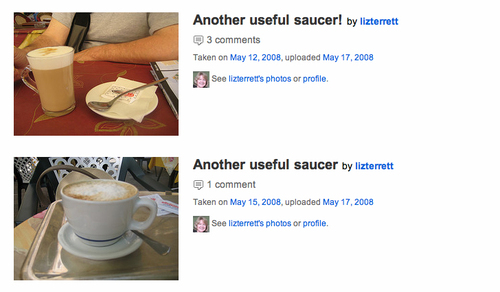 * Yes, yes, I know that Kelmscott House is in Hammersmith. But still.

Posted at 09:26 in Complaints Dept. | Permalink

The saucer's also there to catch the drips, if you're a messy drinker like me, but the 'useless saucer'*tm* adds a paper napkin between cup and saucer, which makes the saucer irrelevant and the napkin useless too, once it's soaked up the drips.

A back to form post from the mighty ben. But I think you should consider inviting your mum for a spell of guest posting.

But look on the saucer that's sat on the Applied Green paper. There's a spillage! If the saucer hadn't caught it - it would on the paper.

saucers aside, I gotta say I agree with Richard... those latte glasses are the most ludicrous drinking receptacles on offer. Impossible to hold, insanely high centre of gravity and the incredible ability to strip one of all self esteem. Nonsense!

one another note; what if the saucer were a tasty biscuit. Would that make things better?

Wait, I thought one of the perks was having a place to hold the spoon-- imagine them lying around on the table surface!

Well, from a waiter point a view (I used to be one during my student years) the saucer helps to have a less messy table when the (unhappy whatever you do) client leaves. Grrrrr.

The future is mugs, I tell you. Mugs are ideal one-handed drinking vessels for conferences, etc, and they hold more fluid, so you need fewer refils. Any place that serves mugs - *everybody* asks for a mug rather than a cup. Mugs are the best. So why don't more conference organisers twig this?

(as for drippy teaspoons - something like a chopstick rest would do fine, or, at least, a single communal saucer).

Have to agreeon saucers being useless. Saucers are probably the most common reason for 'babies scalded by stupid latte glass contents' because theres no room on a silly little table for a 2 plates with pastries, 2 cups and saucers, the sauces (why, with sweet pastries?) and the babies bottle. How about something in the middle to hold the used teaspoons, you only use them once...

Ha Ha that made me laugh. Latte tastes much better in a take away container. Couldn't agree more about saucers. Bloody useless and just another thing to waste water on when cleaning.

I was going to mention mugs, but Tom Armitage just did a much better job. However, I wanted to make sure my vote in favour of them was recorded anyway.

I think you are all being very selfish. The Wikipedia article on saucers helpfuly reminds us that:

Not only are saucers used by humans, they are also used by animals, e.g. cats may drink or eat from saucers.

If we got rid of saucers, cats would starve.

Great post Ben - nice to read a good old rant, especially one so well researched and backed up with documentation and diagrams! Your digitally savvy piss-taking parents made me laugh out loud.
About the teaspoon holding aspect as @Danielle mentioned - L'Epicerie on Chatsworth Road, E5 has these mugs that hold the teaspoon in the handle: there's a hole that you put the spoon handle down into. Solves the teaspoon problem (tho' not the drips - just lick the spoon ok?!) but unfortunately the cups are kind of ugly. Will try get a photo next time.

i love your digitally savvy piss-taking parents. and agreed - liz terrett needs to do a guest post next time you're away.

as much as i agree with the useless saucer, please tell me that you're not suggesting that tea be drunk out of mugs - that's as common as putting pouring the milk in while you've still got the tea bag in.

and, about that latte glass - you crazy brits have no idea about lattes do you... firstly you make 'em bad, then you serve 'em in an ice cream dish. lattes need to be in a short, open glass, easy to drink before it goes cold, not in some ugly pint-glass wannabe.

At my local garden centre you can either order a cup of tea or a mug of tea...obviously mugs are preferable but if you get a cup of tea, and therefore a saucer too, you can have as many free refills as you like...so I'm guessing either there is blatant discrimination afoot to non pensioners OR Saucers are magic.
Yer, great post and I think guest blogging by your parents would be a (dare I say it) Wizard idea.

The most annoying thing about a saucer is that it holds your spills. So that every time you put your cup down again, you put it right back into the spillage. As a result, your cup has a new amount of liquid on the bottom every subsequent time that you pick it up, virtually ensuring that at some point you will dribble on your nice clean shirt that you carefully selected so that you would look sharp and intelligent while having conversations at the conference.

I'm fine with those latte glasses themselves. They've got a decent flat bottom. EXCEPT - they always put them on a too small stupid useless saucer which makes them less stable! The saucer makes itself look as if it's useful as it catches spillage which it is in fact the cause of!

Well done on the William Morris intro. The pub is named after a Hammersmith luminary who represents all that is right with Hammersmith; whilst the pub itself represents all that is wrong (two Wetherspoons on the same street kind of says it all).
Your photo also catches one of the worst bits of urban design - the high rippled kerb, with a shiny metal railing. It's intended to protect pedestrians, but all it does is encourage cars to treat the corner like a racetrack. Not beautiful and only useful if you want drivers to do 45mph as they accelerate into a high street.
Oh yes, and mugs all the way. Perhaps with a little biscuit holder built in (and drips can be dealt with with a simple napkin, or the cuff of a dark shirt).

I am total agreement with you on this. You are a visionary my friend. You could be useful in Government. Let's write a bill on this.

I haven't laughed so hard at a blog entry like... ever! And I used to read Go Fug Yourself!

This is one of those awful niggly things that only pop into your brain when you're in a cafe or a meeting. BUT it is so entirely frustrating!

Another tea related design issue is handles. Particularly the handles on cups in hotels and conferences. Who has fingers tiny enough to hold them?! Pah!

What is this? Bad designers' day?
Saucers are good, the product designers sometimes are not.

"The point isn't to hold the tea bag, you should take that out beforehand"
No, the drinker should take it out, or leave it for longer.
And if somebody needs the spoon, should it stay on the table, mingling with the papers&books? We don't like spotted sheets, unless the guy's a genius.
And what is caffee latteee ? Grow up - a cappuccino is better, no sugar. I recommend Caffe' Vergnano - one near Jubilee Bridge, the other near Leicester Sq. tube station on Charing Cross rd. - you'll have a nice surprise with the chocolate on top. And they have decent saucers.

signed - the girl who likes saucers
I'll be back.

I believe saucers have no major purpose like that of the cup but in some sense it has little purpose here and there. Prevent some drips, prevent coffee stain by the cup onto the table, etc..

Seems too extreme to get so paranoid about some harmless accessories.

Please join my Facebook group which has a sole purpose of building worldwide momentum to ban the latte glass!

Did you mean exacerbated?