There is a recession coming. People have been unsure for a while, but that uncertainty has faded. It's coming. Here at NDG our job is to help you through these difficult times with jokes, tea and Guest Posts. So all this week we're going to be running a little series on the Recession. Err, we can't think of a better title than 'Recession: Simple Advice for Designers' so feel free to suggest one in the comments.

Anyway, recession is probably going to affect the listenership of this blog significantly. Most of you work in small, owner managed businesses and traditionally marketing budgets get hit hard by a downturn. So we've rounded up a series of experts to comment on various aspects of the recession. From New Business, through Accountancy and various other disciplines these Guest Posters all have some suggestions to help you out and crucially they have two things in common. One, they are not the usual suspects, they may blog elsewhere but you probably won't be that familiar with them. Secondly, they are wise enough to have seen a recession before and to have some experience of the difficult times.

So that's this week. But before we do all that, I'm going to add my bit. I'm not going to offer any practical advice at all, I'm just going to talk about Credit Crunch graphics.

I've mentioned before how miserable the Credit Crunch Graphics have been. Truly woeful. I was kind of hoping for something better. It's just been the usual fare of downward arrows and red boxes.

There's been some funny stuff, and as you'd expect the British tabloids have risen to the challenge. This Sun front page from the morning after the Bailout being a highlight. 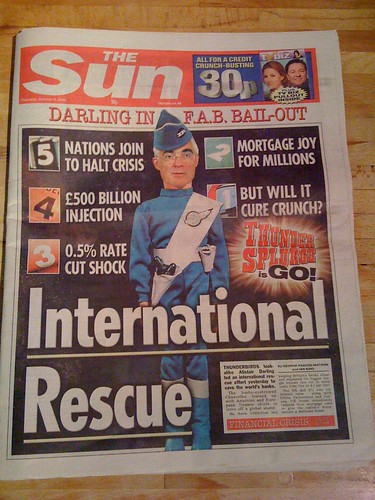 Talking of the Bailout here's The City the morning after that historic event. 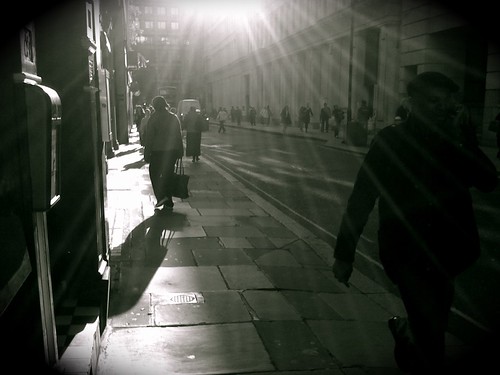 Err, doesn't look any different does it? As Chris correctly points out it's very, very hard to picture intangibles. As anyone who has ever worked in Pharmaceutical advertising will tell you, it's very hard to depict things like 'ill, but better than a few weeks ago' just like it's hard to depict 'my mortgage now costs £50 a month more' in a concise witty way. Which is why most newspapers revert to pointy red boxes. 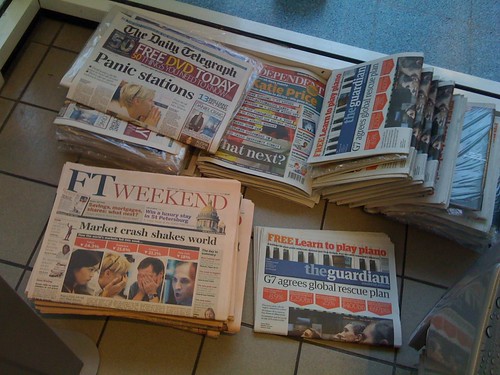 If all else fails they resort to the dramatically distorted depiction. 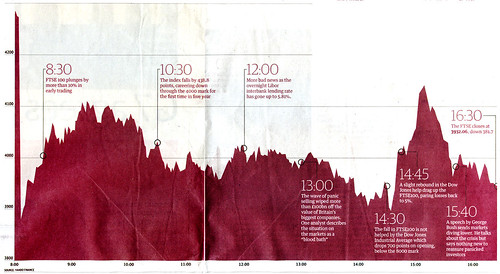 You'd think in this day and age Data Viz would help us out wouldn't you?

Phil has a brilliant post over on his blog about this chart. There's lots of peculiarities here. Apparently the FTSE started at 1000 so possibly showing the zero line would be pointless. However, the graph does significantly distort the truth to make a point. But then maybe that is the point. To show you the drama of one day? Whichever, Phil went to the trouble of redrawing the graph with a zero line to inject some reality into proceedings. 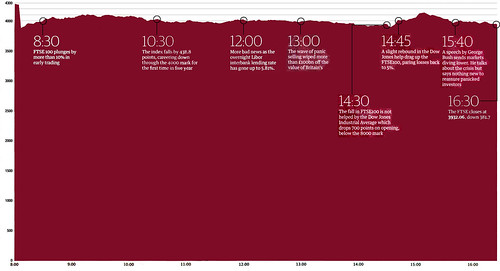 That's good isn't it? Illuminating. But it's still not perfect. The best stock market chart I've seen inevitably comes from the brilliant Khoi and the gang over at the New York Times. 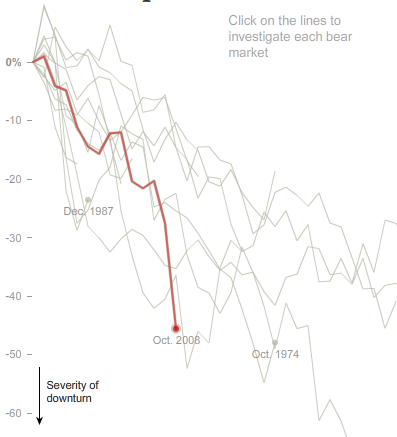 It's hard to see in that screen grab, but this brilliant interactive graph compares the current fall in stocks to other falls in history. It makes for scary reading.

This is a cool thing by the Banksyesque K-Guy, witty and well done. It's clever and very of the moment. 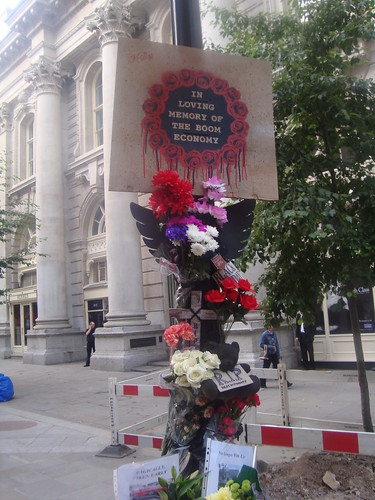 Actually I'm surprised we haven't seen more of this kind of stuff. Surely something like this would suit a Guardian front page? I did see this leaflet for a Princes Trust event. Close, but no cigar. Definitely no cigar. 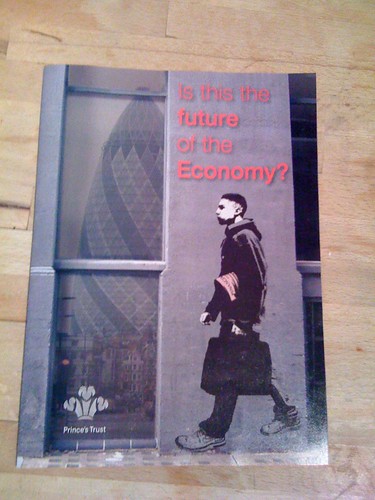 So there you go.

Simple, honest, practical advice will follow this week. Don't miss it. A see if you can think of a better title than 'Recession: Simple Advice for Designers'.

(I ought to mention that all those pictures were taken from the Credit Crunch Graphics Flickr Pool and they all link back to their original pages. Thanks to the photographers!)

This is a brilliant idea, Ben. What service. Thanks for doing the running around while we just sit here and soak up the goodies.

This seems to sum up the usual depiction of economic decline better than anything: The Brokers With Hands On Their Faces Blog. (http://brokershandsontheirfacesblog.tumblr.com/).

It is a nice blog.However I don't agree with the fact that the recession is fadding and expected to the level of soon recovery.I believe the recession period no doubt may show fadding curve but probably is gone a to take little longer.