I guess with a name like 3 Fish In A Tree it's apt that their office should have some of characteristics of a goldfish bowl.

I don't mean that in a bad way, I'm sure there are lots of you reading this who would swap your office for 3 Fish In A Tree's place in the Oxo Tower on London's Southbank. It's a vibrant community where tourists and jewellery makers mix freely. It also means 3 Fish effectively work in a shop and anyone can look in, hence the goldfish analogy. From the outside I can see seven designers, one account manager and one studio manager. I'm here to meet one of the designers, Matt Dent. Some of you might remember that Matt spoke at Interesting 2008 and that he is the designer of The Royal Mint's new coins. 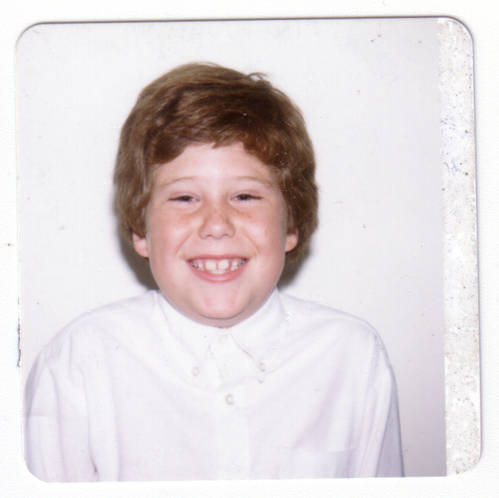 Matt and his colleague Chris Davies have both been promoted to the role of director at 3 Fish. This follows eight years of growth for the company; during which time they've worked for clients such as Olympus, Samsung and GB Airways.

“We are winning some great creative work at the moment against some big-hitting agencies,” 3 Fish founder Ricky Oh observes. “Matt and Chris are directly responsible for making that happen. Their promotion just recognises that fact.'

Before I put your questions to Matt, I sat down with Ricky and Matt and we chatted more generally.

Matt's been with them for 3 and a half years and has possibly the oddest route in to a job as graphic designer I've ever heard. After Matt left college he travelled to London all the time looking for jobs, with no success. So he went to New Zealand for a year. When he came back he signed on. At the same time  3 Fish In A Tree had placed an ad with the Job Centre. Ricky says they got all sorts of odd letters. Lots of ones along the lines of, 'I have no qualifications but I've got to apply for this job to keep getting my benefits, that said being a graphic designer sounds like fun...' Eventually this process turned up Matt. 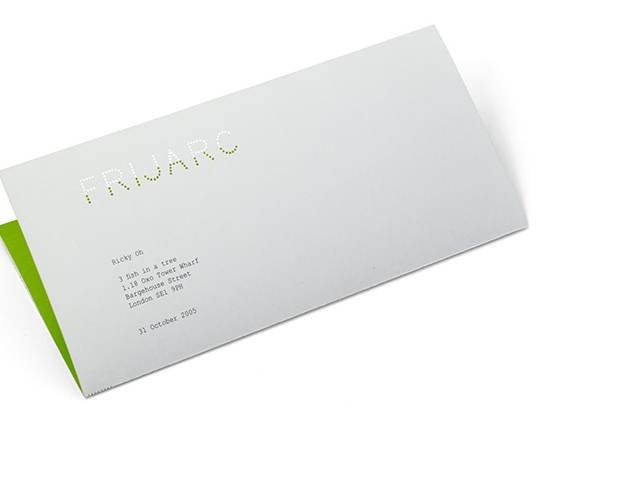 Matt first worked on a rebrand for a firm of lawyers. That was a big project taking 3.5 years. Apparently the hardest thing about that project was the franking stamps. They kept getting lost in the post. And now Matt's a director of a 9 strong design firm at the age of 27. Ricky goes on to say, "If you're responsible for bringing in work and managing clients then you can be a director. Everyone can be a director."

We spoke a lot about Recession. They're not unduly worried by this. In what I think will be a familiar tale up and down the land there will be tightened belts but nothing drastic. They were due to expand into the unit next to them but a client just got bought out and so this is on hold. They don't see the company growing much beyond 15 people, "Stay small, do good work. Good work for good clients and stay profitable."

And then I asked your questions. 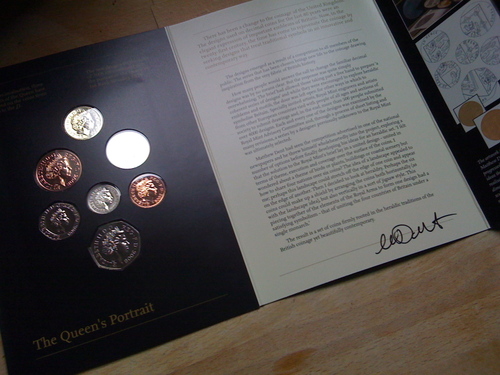 Why was the £2 coin left out of the collection/design?
It wasn't in the brief. 1-50p only. The pounds have a separate strategy that they are updated regularly, but it was but in the collection because it acted as a unifier.

Who would win in a fight between Chrissy Waddle and Cinderella ? No rules.
Gut feeling - Chris Waddle.

What other class of everyday objects would he like to give a systematic overhaul?
The thing I'd like to design above all else would be a tree house. The one constraint is that it would have to be practical; it would be designed with a particular tree, a particular set of branches, in mind. I like the idea of choosing the right spot so that some of the tree's branches shield the house from view, so from certain angles it was invisible. It would also be completely dismantleable. You wouldn't know when it was there, and you'd be none the wiser when it wasn't. I'd probably then need to design a map to find my invisible tree house.

What other concepts did you toss around before coming to and settling on the Royal Arms?
They asked for 6 designs that represented the UK, but there's 4 countries in the Union. Initial idea was a landscape, but then I realised that heraldry makes a nice mass of objects.

What has been the establishment’s response to his groundbreaking design and will he be doing stamps next ?
I would love to do stamps. The enthusiasts magazine liked them a lot. The enthusiasts (and particularly their magazine) have a lot of clout.

Why did he decide to work for that company... their website looks crap? You should ask him why he’s working at such a dodgy company?
I think it's a good website. It's only a matter of time before 3 Fish In A Tree gets the recognition it deserves, recently we've been beating CDT in pitches, so I don't agree that it's a dodgy company.

How long did it take him to do the coin design... i.e. 3hours... 2days...?
I was involved in some capacity for 2.5 years. The first stage was to present vector drawings of the designs and then I developed it with the people at the Royal Mint. For a long time it was down to me and one other guy.

(Matt emails this extra information afterwards.) It was a design produced by David Gentleman. And strangely enough, his designs (although of different subject matter) like mine had an order to it, a sequence. His sequence was determined by the development of an oak tree, beginning as an acorn on the penny, maturing to a majestic tree by the fifty pence. Each design was supported by the elegant typography of the coin’s denomination and framed by the border of the coin. The crisp lines of the design, together with the simplicity in the arrangement of the typography gave the set a clean, bold approach. A lovely series. 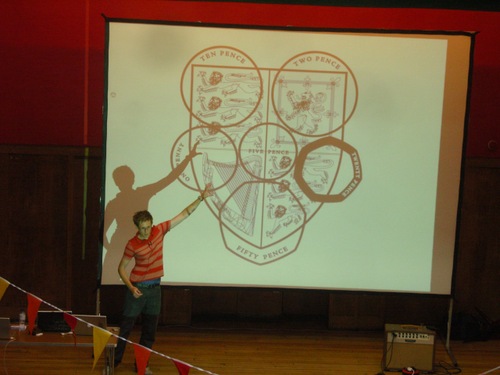 Why are there no numerals on the coins?
Numbers aren't normally used. They don't have numbers on US coins, for example. The only reason you're used to seeing them is that they were put on the last set of coins because they were produced for decimalisation and it was thought that the numbers would help people understand the concept. (The coins are updated periodically. Their last major overhaul was for decimalisation which happened to be 40 years ago. These designs are likely to remain in production until the Queen is succeeded - there is no fixed timescale.).

What’s your favourite money? Other countries etc?
I liked the old Irish ones before the Euro, they had animals, fish and cows and stuff. And everyone likes the Australian notes, the unrippable ones.

What were you working on this morning?
Researching an online game for a major airline.

Thanks to Matt and Ricky for a good chat and a nice lunch. If you wanna find out more Creative Review did a more in depth interview with Matt in April.

Thanks to you lot we are having a competition to see who can be the first person to collect them all!

Really like the sound of the oak tree coins, shame they didn't get made as well.