The Blogfire of the Vanities

Lots of people say that a blog is just an online exercise in vanity. The normal response to that is, "Oh no, it's about sharing, learning, the interesting space where digital meets physical" Blah blah blah.

With that in mind, here's a vanity update.

First up, these little babies have been popping up all over Flickr. Which is smashing. They look really lovely. They've all been sent out now to as far afield as New Zealand and Mexico. You should have had yours, if you haven't drop me a line. But we don't have any left. But still drop me a line. 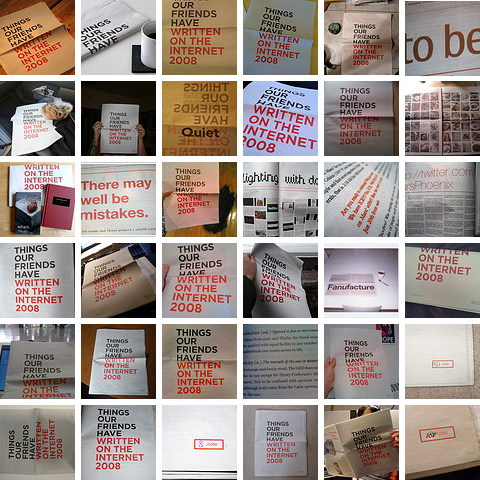 David has created a Flickr Group called One Thousand Covers and he wants everyone to try and track all 1,000 newspapers. Which is a great idea. Ideally he just wants the hand numbered bit. Read more about it here. Great idea David. Thanks.

The newspaper was also featured in Creative Review which was very kind of them. 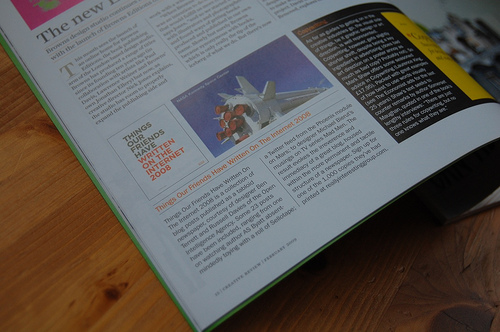 Which reminds me, so far this year the Creative Review covers have been brilliant. If you ask me. I don't know why they made the Brazilian one yellow, when it was on white to start with. But hey, it still looks great. 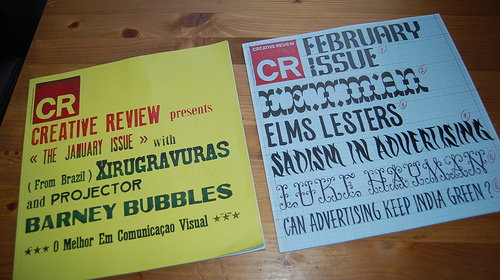 And. CBC Radio in Canada interviewed me about the newspaper project last week. They make a very clever programme called Spark with is a bit like iPM over here. Should you wish you can listen to my interview here. I'm about 2 minutes in.

Lastly, The Journal Of The International Institute (you've heard of them, right?) used one of my Flickr pictures. They did everything right. Emailed me, emailed me again when I didn't reply. Asked nicely. Credited me. Very good. 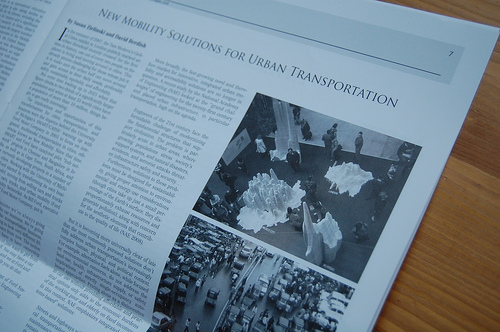 Posted at 16:10 in How To Start Up A Graphic Design Consultancy (Sort Of) | Permalink

#697 lives in Sydney, Australia. I'll take a photo and post it over the weekend.

BTW, thanks Ben, It looks great.

Got mine! Thanks for sending one across the pond.

Did they pay you for your photo?

Printing on the back of something else. I guess that would be designy.

John, they didn't pay me. Generally my pictures are free to use as long as it's non commercial, you ask and you give me a copy.

But none of that counts for you. You have to pay.

If I don't you're going to break my jaw, right?

John, I have people who do that for me.

Yes Ben, but that doesn't come for free either, how many times do I need to tell you? Ha ha ha.

It seems that the Kiwi post is somewhat slower than the rest of the world… or worse. Still, I wait ever patiently every morning just in case mine arrives today.

#581 has had a different home every night for the past week, mostly around Oxfordshire though... well read around the office! Thank you

#634 is in Bethnal Green, thoroughly flicked through.

I didnt know you were sending out to places as far as Sydney, any copies left that i could get my hands on?