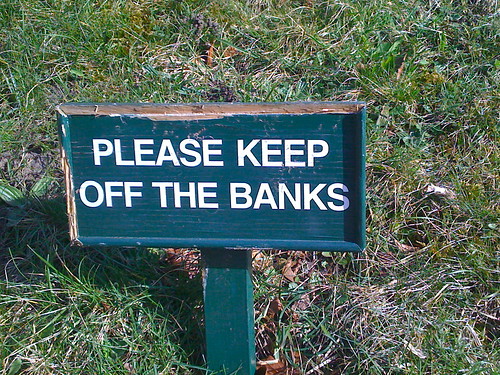 As spotted by Mike of Surrey.

A while ago I spotted (but failed to blog) that the FT appeared to have commissioned a series of photographs of bank logos. Essentially the signs of Barclays, RBS and the others photographed in many different ways. At night, in the rain, on wooden signs, on illuminated signs and so on.

This, as we've discussed before, is because of a dearth of decent images concerning the Credit Crunch.

This would be a good one though, wouldn't it? Especially for Mandy's comments asking people to stop "bashing" the bankers.

Seriously if you're from the FT or something, give Mike a call, buy this photo off him and win front page of the year at the Press Awards.

can i put in a bid to win with my 'unstable banks' sign: http://www.funkypancake.com/blog/archives/2008/09/unstable-bank.html

Cheers Ben - just waiting for the phone to ring now. Funky Pancake's is pretty good too - the other side of the story, perhaps?

What really is a credit crunch?

We are currently facing a severe one globally.

Hi, can I have your permission to use this photo?