The Art of Penguin Science Fiction

I've just had an email from James Pardey who sent me a link to his wonderful website. The Art of Penguin Science Fiction. 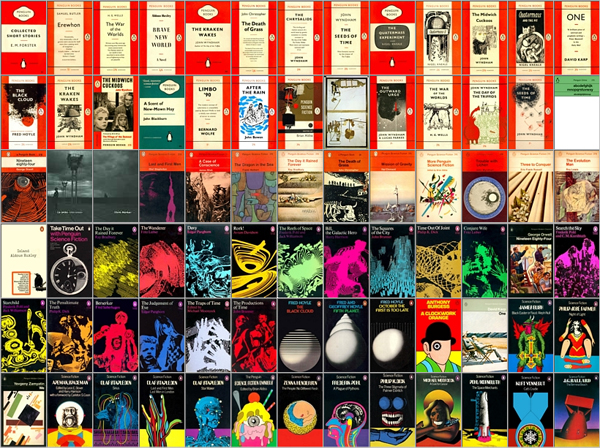 "The purpose of the website is to complement a series of articles I've written for the Penguin Collector's Society on the history and cover art of science fiction published by Penguin Books from 1935 to 1977.

The website is primarily intended to be a visual experience (there are over 150 Penguin sf covers, which Penguin has granted me a licence to use) with the articles going into more detail about the sf itself, and the connections between sf and twentieth-century art (abstraction, surrealism, Pop, etc.) which is my main area of interest. This linkage between sf and modern art will also be the subject of some talks and further articles in newspapers and magazines that I am now planning.

My main area of interest is the linkage between modern science fiction - by which I mean Jules Verne and H G Wells onwards - and twentieth-century art (abstraction, surrealism, Pop, etc.).

Where Penguin comes into this is that in the 1960s they launched an sf series with covers by the great Germano Facetti. But instead of using pictures of aliens, rocketships, and bug-eyed monsters, Facetti chose reproductions of paintings by Max Ernst, Paul Klee, Yves Tanguy, Joan Miro and Rene Magritte to name a few. Why? Well, each painting was carefully chosen to tie in with some aspect of the novel, and it is these connections that form the heart of the website and the articles that I've written to accompany it. The articles are being published by the Penguin Collectors' Society (last December and two more due this year) but the articles and website only go so far.

There is more to explore, such as the links between J G Ballard and surrealism, Jules Verne and the Belgian surrealist Paul Delvaux, Delvaux and Ballard, etc., etc. I am therefore planning to examine this in some talks and further articles for newspapers and magazines. Incidentally, instead of starting in the 1960s I decided that both the website and articles should start at the beginning, when Penguin was founded in 1935.

I did this in order to tell "the whole story" since the early orange-and-white banded covers of Penguin books have since become regarded as design classics and, to many people, miniature works of art in their own right. And after the sf series in the 1960s, the influence of Pop Art and Op Art can be seen in the later Penguin sf covers by Alan Aldridge and Franco Grignani, while those by David Pelham have also achieved iconic status. Facetti was no stranger to sf either, as he appeared in La Jetee, a seminal art-house sf movie by the French New-Wave director Chris Marker."

Would love to own some of these.

Aaaah, La Jetée, THAT is cinema.

Agreed, Loic. As you are no doubt aware, La Jetée was the inspiration for Terry Gilliam's superb 12 Monkeys and well worth watching if you can find a copy.