Sometimes I hate this profession 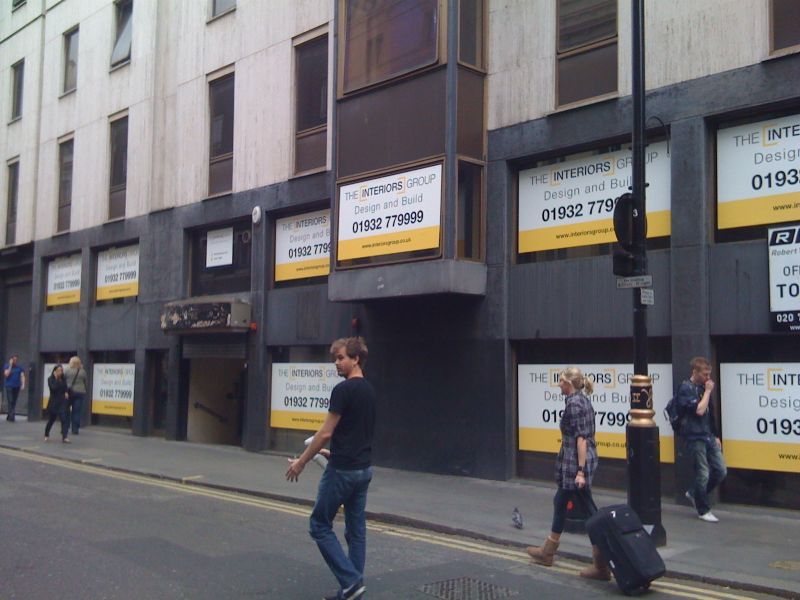 I despair when I see stuff like this, and you see it everywhere. Does that building really need all those signs? Do they have to be so ugly. Does that huge slab of space have to be made so aggressive and so intrusive by the addition of graphic design?

There should be some humour in there, a light touch to make passers by smile. There is an opportunity to do something with half a street for God's sake! Failing that (and that's a tall order admittedly) just keep it simple and quiet. One sign would be enough. Two at a push.

This is nothing new. You see this everywhere, all the time and you always will.

And then there's this. You see this everywhere too. 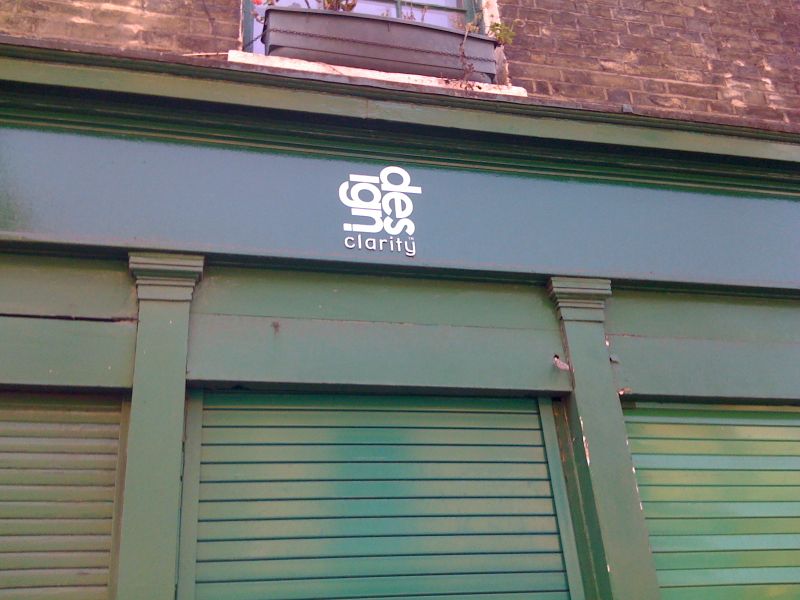 That's the logo for a company called 'design clarity'. Design. Clarity. So fucking clear you can't read the bloody sign because they put the logotype through a shredder.

I don't know if that's supposed to be ironic or even a joke. I think it's just shit. And wrong. And a little bit depressing. There's nothing worse than designers trying too hard to be clever.

And they're no good at tending to their window box either, are they? They should get in touch with Richard.

looks like a rip off of grafik magazine http://www.grafikmagazine.co.uk/

Agreed, that is Pony.

Maybe it was the client who was trying to be clever - and not the designer?

I can't disagree with you - those signs look like shit!

Was it a prank perhaps? Maybe they forgot what clarity means?

You could surely argue that people aren't going to notice one sign on such a bland building but they may notice 12. I'm not saying the signs themselves are particularly good at advertising the company, but if you look at them from a purely aesthetic point of view, they do actually do a good job of livening up what would otherwise be a bland, grey street.

I can't defend Design Clarity, though.

But I wonder what their brief and strategy was?

"Shit, all this space is un-let. Do something now. Plaster ever window with signs no one can miss. Now. Do it now".

And it was done that day and the space was let that month and one more month of un-let-ness was saved (which on a property that size would be a serious chunk).

"Humm. We need to let the space. Someone write a brief. Put it out to tender. Lets see some pitches. Get a short list. Pick an agency. See some routes. Pick a route. Have it produced. Maybe we'll be in Creative Review. Maybe we'll win a D&AD."

This route takes the client one further month of un-let-ness and costs more to produce.

My point is that this looks bad because the people that got it done could not see a viable alternative option that would stop them haemorrhaging money.

If we want to answer briefs like these then we need to promote design as a business tool that will get return. Our industry needs to be part of that first train of though. "Shit - we need to perform better - call the Really Interesting Group now - after all we're called The Interiors Group..."

As for the design charity... again bad... but again I wonder how it came to that. Some designer somewhere managed to convince them they were good. Imagine if only good designers had that skill...

Matthew, they're not To Let signs. Look at the picture again.

They simply advertise the name of the company who is refurbishing the building.

Sorry for the miss directed rant!

I walk past that building every day and honestly didn't notice the signs until I deliberately looked for them on the way home after reading the entry. Coming off of Oxford Street you're completely inundated with advertising so this just seems to blend into the background noise. Lovely....

I know the guys from Design Clarity.

They're an interior design company, originally they started in Sydney, so that's the source of the logo. I wasn't too keen on it either when I first saw it. Their business cards are square shaped as well, personally, I'm not too keen on a square business card, but it translated (kind of) well on their site.

Man, it really is funnier than most of the stuff I've seen on YouTube.