Right then. Seeing as it's the awards ceremony on Wednesday night, what do you think of the D&AD Awards? 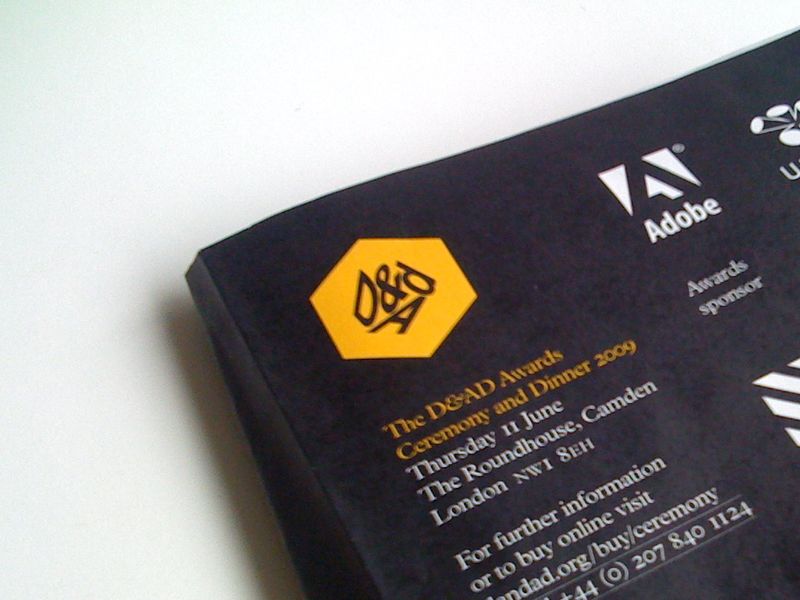 Straight off the bat. Are they too expensive? Too cheap? Very prestigious? Not enough designers win? Too many designers win? Same old people win? Couldn't care less?

Let me know in the comments.

I've talked about D&AD many times over the years, and my arguments are pretty straightforward. I'm sure I'm not the only one who has observed these sentiments.

1. D&AD tries to be three things: a professional organisation, an educational institute, and an awards body. I don't know if one group should be operating all three, especially when conflicts arise about hiring D&AD course grads, selecting judges, etc.

2. The D&AD Awards have become hyper-prestigious due to their international appeal. While it's great to have competition, it gives many young creatives the pessimistic view that "I will NEVER win a D&AD, so why bother entering." I wonder how long this can be sustained.

3. Because of the ever-increasing size, I feel there should be a UK-only division, as well as an overall winner. Great if it's the same entry.

4. Most of the winners are from advertising, traditional graphic design takes a back seat. It always has.

5. Most of the winners are from big, multinational advertising agencies, smaller shops and studios take a back seat. They always have.

6. Since D&AD prides itself on awarding the best "idea", some of the most gorgeous, well-executed work gets cast aside for being superficially pretty. But that's a serious component of our industry and can't be ignored. (especially in packaging and graphics) But half the time that's exactly what the client needs, and is therefore a very successful project by many criteria. Why doesn't market impact count for more.

7. Winning a D&AD has an almost superhuman ability to launch a career. Should a handful of judges in a room have such power over an individual or an industry?

One thing the Awards definitely are is on Thursday, Ben. Not Wednesday.

I'm from Canada, never really paid any attention to awards. Our clients are happy, our employees/designers are happy, we all make some money because of the mutual success we share.

What more can you ask from a career? Furthermore, I don't like the idea of a group of people (brilliant minds or otherwise) confirming my success or effectiveness based on their personal opinions.

Prescott Perez-Fox, I couldn't disagree with you more. D&AD does a truly superb job in evangelising great design work. In particular it helps to inspire people to get into design and for those in the industry it inspires them to reach to great heights. I think you are correct that it places idea above execution in the first instance (although not exclusively as you suggest) and I think that is absolutely correct too!

Ben, im surprised your question is so negative. How about asking what's good rather than just what is bad?

It's a not-for-profit organisation not some government department so it doesn't have to exist. I personally think we should all be grateful that they work so hard to do what they do, inspiring, educating and providing awards to recognise great design work. Their aim is only a positive one and I think we should be appreciative of that rather than look for reasons to bash them. For that reason I have nothing to say to criticise the awards, I think they are excellent

Nit-picking aside, I'm in favour of D&AD, and OB has pretty much said why. Every agency I've worked at was full of people who whined cynically about the awards, and then grabbed an Annual off the shelf as soon as the ideas started drying up. This, the most high-profile side of D&AD, has surely inspired countless creatives over the years.

Awards face the same criticisms in any industry: why should a group of the same old faces get to pontificate about what's good and what's not? And yet, every industry has them. Why? I think the obvious reason is the right one: to inspire everyone by celebrating excellent work.

Of course that's massively subjective, but I think D&AD judges do a pretty good job of picking the good stuff. I was a judge for the first time this year, and was thoroughly impressed by the seriousness with which the decisions were taken, and how much all the judges obviously cared about the work. (And forget nepotism: there were entries by judges in our jury that still didn't get into the book.)

I do, however, think they're bloody expensive awards to get into, which is a shame. The cost of entering is so high I cut my original shortlist of entries from six to two - on balance, I might have contributed more money if I'd felt I was getting more value (i.e. more entries) for it.

That's bound to create an imbalance of entries. Big fat agencies (ad or design) can carpet-bomb the categories, while smaller businesses and freelancers have to be very sparing. I'm sure the balance of work in the Annual must reflect that, which doesn't seem very equitable.

Then, of course, the ceremoney itself is £200-odd to get into, *plus* booze. I'm only going this year because I was judging - normally I don't feel I can justify it. Again, this must mean the evening is full of people from big companies who can splash out.

How you get these cost down is the big question. But our judges' lunch was supplied by Leith's. It was very nice, but surely unecessarily pricey. There were big inflatable walls too, creating a sort of reception/coffee area. Again, impressive - but how much did it cost?

It's good to reward people for giving up their time with some nice perks, but I did feel the judging could have been staged in a less costly way all round. (The Gold judging was much lower-key, and no less enjoyable.) Maybe that's a way to start lowering the prices.

(PS: If the question wasn't so specifically about the awards, I'd mention D&AD Exchange, Workout, lectures and so on as points in their favour. I've done a Workout day and it was brilliant.)

Oops, I wrote 'ceremoney'. How very Freudian of me.

I always enjoy looking at the winners each year, and I like how the decisions can be subjective, it's part of what makes the design industry unique, and hey, gives us something to talk about. I feel however, so removed from the D&AD awards as a young designer trying his hardest to make an impact on the design world around him. I feel the prices to enter and to attend etc makes it so unrealistic to join in and this must result in a lot of good work missing out.

thank god something is still about the ideas.

I like D&AD. They do good stuff. The student side of things is particularly good, with the best student briefs out there.

But the awards are costly to enter, and the awards dinner is waaaay to expensive to go to.

One thing I've noticed generally, is that the whole role of awards, and more particularly annuals, has changed. Now that we can showcase our work online, and see everyone else's work there too, we don't rely on annuals the way we used to. In fact they feel a bit old and static compared to the web.

I wonder if that's affecting how people feel about entering the awards...

Tried leaving a comment earlier before the other posts mentioning the results... D&AD seems a big deal, but hardly significant to me and I confess to being ignorant of the design categories it encircles. Working in car design, I feel on the periphery of such events, though as designer first and car-guy second, the results still interest me.

So as an outsider then, D&AD is certainly something I have heard of, though it seems peculiar to Britain and advertising, whereas Good Design strikes me as more Global and, occasionally, more relevant in their brief toe-dipping in car design.

In this respect awards at Concours d'Elegance and those by Car Design News offer views closer to my own. And at least none of those succumbs to using Richard E Grant to hand over the loot.