« Social and Commercial | Main | Restrictive choice as a design virtue »

Putting a donk on the day

Nothing to worry about, just your classic "below par" as Tom described it. One of the reasons is that I've been trying to finish an article and I've been struggling with the ending. The reasons I'm struggling is that I'm ending by talking about The Web Of Things and Fanufacture and Thingfastructure, clever things I know little about.

I've written articles like these before, or course, but the previous one was written by Adrian Shaughnessy so my one needs to be, proper. You know. Good. (In my head) I know the point I'm trying to make. It's just a struggle to get it down on paper.

And then I get home and these things arrive in the post.

Firstly these little notebooks I've made. 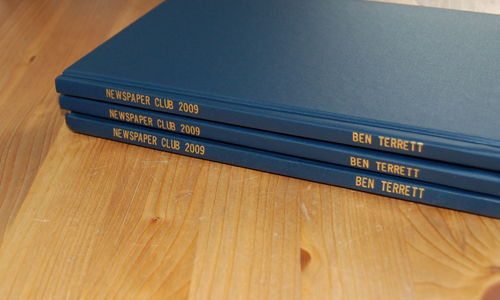 They are lulu books. Nothing that unusual about that, we all know what they are. But they are also cheap, ultra limited edition, bespoke notebooks for a new project.

And then there's this. 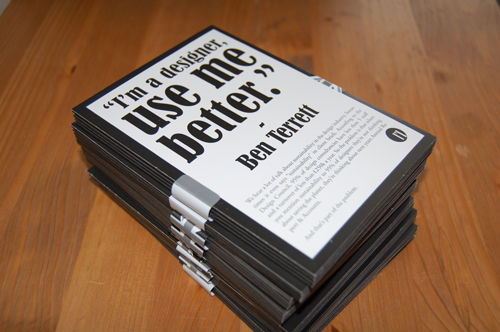 Loïc has been telling me about this for ages. But, if I'm honest, I never 100% understood what he was getting at. Loïc is French and although his English is a thousand times better than my French, I got lost in the translation. But now everything is clear.

He's taken this talk and printed it as a limited edition of 1,000 booklets. One side in English and one side in French. Which is pretty humbling and flattering. Thank you, Loïc.

And, lastly, the third thing. Less serious than the other two. There were some emails flying round today after Thursday night. Bearing in mind that we didn't really know each other before Thursday, someone said, "I just could not have enjoyed myself more. I felt completely relaxed within minutes and just had a blast."

All of these three things point to how the internet makes collaboration and remixing easy and fun. And how it lends itself to that kind activity. But more importantly it's how various bits can become more than the sum of their parts. Which is sort of key to how success happens.

A world we can control less than at any other point in time, but a world that needs designers more than ever.

Posted at 21:34 in New Thinking and Ideas | Permalink

Nice use of donk.

All these things are very nice if you don't have to get proper jobs in to pay a mortgage, but they are essentially college projects.