« "Always design a thing by considering it in its next larger context - a chair in a room, a room in a house, a house in an environment, an environment in a city plan." | Main | Next, Katie did India »

I can't stand Stephen Bayley. There are loads of reasons why, but here's the most recent one. 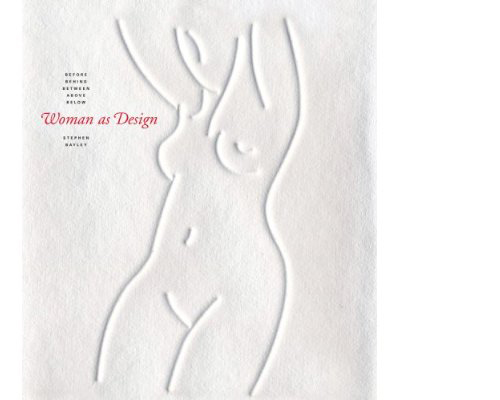 That, in case it's not clear, is a whole book, a design book no less, called Woman As Design - before, behind, between, above and below.

The blurb says, "Stephen Bayley discusses how the female body works as a sign, a symbol...as a designed object." Does everyone else find that offensive? Abhorrent, even? It's not ironic or provocative, it's stupid.

It's precisely because I dislike him so much and because I am a well rounded human being that I read his piece first in a magazine article called 'Designs Of The Decade'. It's very good. Here's what he had to say. 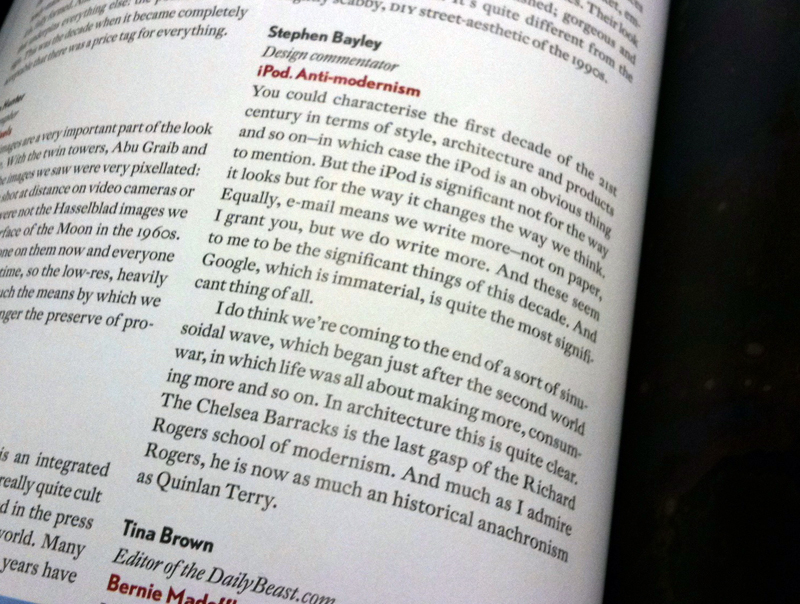 Ignore the iPod bit and read the second paragraph.

"I do think we're coming to the end of a sort of sinusoidal wave, which began just after the second world war, in which life was all about making more, consuming more and so on. In architecture this is quite clear. The Chelsea Barracks is the last gasp of Richard Rogers, he is now as much an historical anachronism as Quinlan Terry."

Leaving aside that fact I hate people who say "I do think" and "I do believe" and so on; thank fuck Modernism is over.

I have always felt guilty that as a designer I don't like modernism enough. I mean, I like white spaces and hard edges and everything, but I don't feel the need to align my whole life to modernism. I would love a Huf Haus, but I'd be just as happy in a Victorian terrace. Sorry. 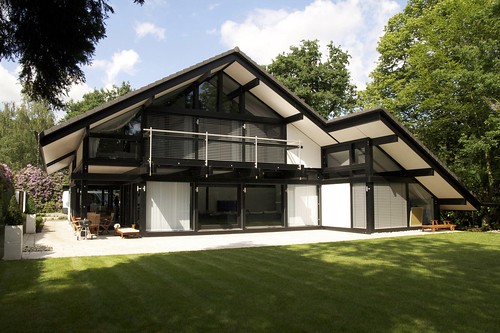 Christmas is a good example of modernism facism. Designers always try and fuck Christmas up by making it stylish and modernistic. Christmas should look like this if you ask me. 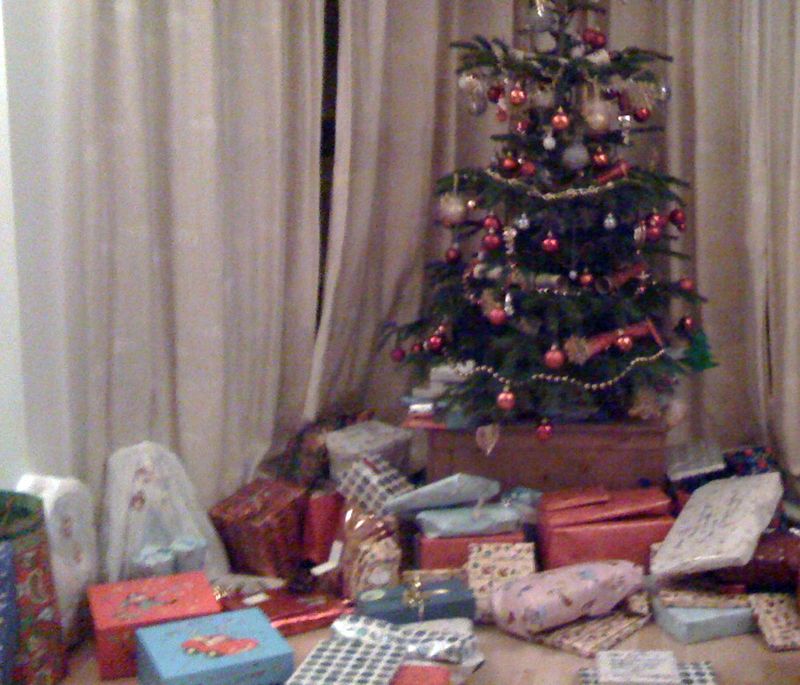 And he's right about the Chelsea Barracks thing too. People are looking beyond steel and glass in big cities. I'm not a steel and glass hater and I'm not a big fan of Chelsea red brick - it's nice to see a mix of both.

And there's another very interesting point in that second paragraph.

"I do think we're coming to the end of a sort of sinusoidal wave, which began just after the second world war, in which life was all about making more, consuming more and so on."

Which reminds me of this brilliant quote from Lewis Mumford which I used in my I'm A Designer. Use Me Better talk.

“Why should we so gratuitously assume, as we constantly do, that the mere existence of a mechanism for manifolding or of mass production carries with it an obligation to use it to the fullest capacity?”

I do hope Stephen is right and we're moving towards the end of that era.

I realise this is an incredibly simplified version of Modernism. But I'm glad it's dead. And thank you Stephen Bayley for letting me know.

Still hate that book though.

Posted at 22:48 in Complaints Dept., New Thinking and Ideas | Permalink

As I previously commented on Germain Greer's Guardian article about Bayley's latest effort (http://bit.ly/2IRxRP), publishing a book under the flimsy intellectual premise 'woman as design' and filling it with lots of pictures of naked woman seems a bit feeble at best, and at worst is quite offensive.

What does it offer us? We already know what 'perfectly formed' naked women look like - they are everywhere in media and advertising. And yes, if you are sexually attracted to women, they look great, if largely atypical. But having a libidinous Bayley tell us that is not especially revealing, in the way that his writing about product design might be, as you've indicated here.

Ooh, I can feel that 'sort of sinusoidal wave' washing over me even as I type.

I don't even know who this guy is, but I hate him already. On a addition to what you said I sit next to someone who says "personally I think that" about everything just justify their bad ideas. Where's my pistol?

Cheers to calling out the "must be trendy" mindset of designers. I HATE when Christmas is all fucked up by stupid non-Christmas colors and stupid non-Christmas designs. I get looks at work too, comments even. But thankfully for me, I've got better rhetorical skills than most of my co-workers. Sucks to be them when we disagree.

Oh, and it's not just Christmas, it's all the time. Why do I have to follow a trend, can't I just make something look good and have an effective message?

Black Christmas trees? More apocalyptic than Christmassy methinks. You seem to do rather well on the present front, btw...

Agree with Christmas whole heartedly! There is nothing more anti christmas than a reductive colour scheme...

There's this book called Lines by Tim Ingold, in which he argues that Modernism forced the line to become straight rather than organic, and now it's breaking free of that again. I totally agree that we all need to get over modernism, post-modernism and get with it. That's what winds me up a little about the Design Museum. They have some amazing stuff but it's all a little modernist heavy...

As for the fucking ridiculous "women as design" book, don't even get me started. I think I need to write my own rant about that one. Coming soon.

I like the way you complain about people that say 'i do think..' and then at the end say 'i do hope..' haha

mm yeah right, an extremly subtle one no doubt

I didn't think it was very subtle, no.