What to do with empty shops and used gum (part 1)

At the end of last year I was in Portland and Seattle. There were a few things I saw that I wanted to blog about, but I never really got the time. What with all that end of the decade madness. 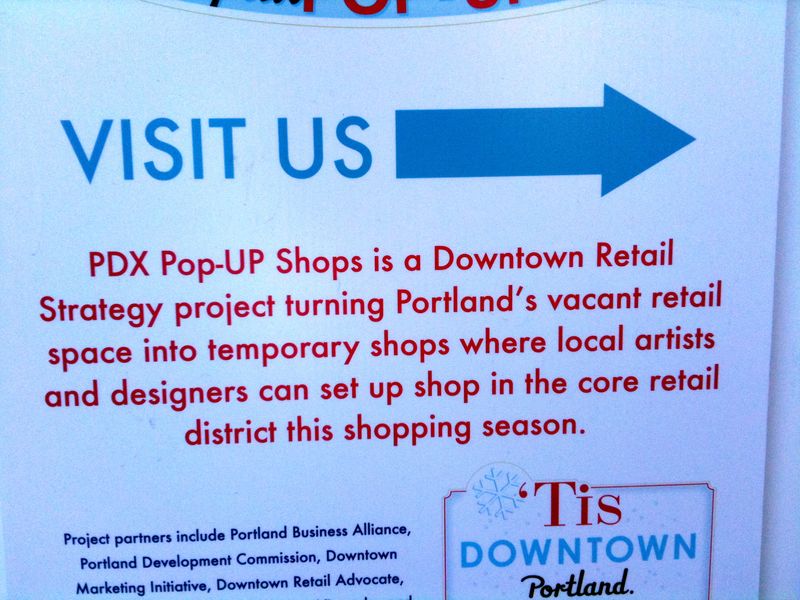 I've always wondered why more towns don't do this. I guess everyone has. I know there are all sorts of boring bureaucratic reasons why you can't just turn empty shops into pop-up shops. Sometimes landlords actually want properties to be empty for a short period of time.

This is good though. Christmas seems the perfect time, with all that increased footfall, to do this.

What first struck me about this notice was the expression 'Pop-up Shops'. 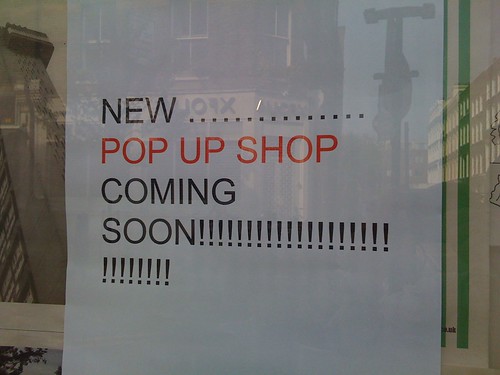 Pop-up shop is jargon which has entered (is entering) the civilian lexicon. I always find that a bit odd. Does it mean anything to anyone? Does anyone care what type of shop it is?

Pop-up shops used to be really quick, for a few days only, only for those in the know, retail experiences. Cool and trendy brands would open them is fringe areas. This year I've noticed an increase in pop-up shops in traditional retail areas by mainstream brands. Cath Kidston has called her new shops Pop-In Shops.

All this made me think about shops a bit more. It feels to me that as the longer the internet sticks around the more relevant the questions we first asked of it become. The 'death of print' is one, the 'death of the high street' is another. We were without internet recently and I had to buy a dishwasher. The thought of going into an actual dishwasher shop filled me with dread. The internet has made that such an easy experience. And crucially, when purchasing something you're unfamiliar with the internet makes you feel like you're being ripped off less than you would be on the high street. That might not be true, but in retail perception is everything.

And just like there are some retail experiences that are better online, there are days when it's better to shop in the real world than the virtual one. Christmas Eve for example.

Which makes me wonder if we'll start to see big, famous brands who only have high street shops at certain times of the year. The pop-up shop concept but slightly more permanent , regular and on the busiest high streets. Borders and HMV strike me as good examples. Everyone knows that the internet is killing the high street bookshop and record shop. Borders are in administration. That's old news. But every Christmas Waterstones and Borders are always packed. So maybe we'll see brands, old brands I guess, that exist all year round but massively ramp up their high street presence at certain times of the year. Most of these businesses make all their profit in one quarter of the year anyway. Greatly reduced costs, same profit.

Popped up not propped up.

Posted at 10:10 in Credit Crunch Graphics, Seen and heard | Permalink

There's a similar thing going on in Brixton at the moment - it's in its early stages but very promising. They're tweeting about it at http://twitter.com/Spacemkrs