This is me earlier today watching Chelsea v Arsenal on my iPhone.

I am the worst type of football fan. The kind you probably all despise. I don't support a team, I couldn't think of anything worse than standing on a wet terrace watching Accrington v Morecombe but I love the Champions League and I'd happily pay over the odds to watch Man U v Chelsea or Arsenal v Liverpool.

However, I have never thought a Sky subscription was worth the money. We don't watch much TV at home and £50 a month seems a lot just to watch the 'big four' games each season. (£50 a month or whatever it is.)

Except now there's a now a Sky Sports app and for £6 a month you can watch all the Premiership and Champions League football Sky have. That sounds reasonable to me. And actually I never really watch the football, I just have it on and glance at it every now and then. The iPhone seems a better way of doing that than some bullshit 50in High Definition TV. I've never really understood the obsession with massive TV's, I think watching TV on your phone or your watch is a much more useful experience than installing the local Odeon in your front room.

So I downloaded the app and signed up.

Today was the first game I watched. And pretty good it was too. The quality was superb and it streamed well for 90 minutes. I think the connection dropped twice, that's all.

Mid way through the game my brother called on Skype. Whilst I was telling him about this something occured to me. Look again at that picture. 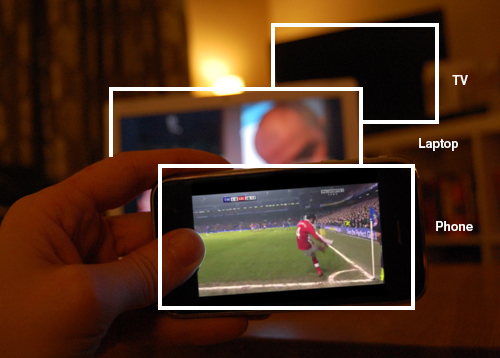 There are three screens in the photograph. I'm watching TV on my phone, I'm talking to my brother on the laptop and the actual television? Switched off.

Unfortuntaely, yes, you are the worst kind of football fan. I go to the games, freeze my bollocks off and have a low quality pie at half time. Can't beat it!

Steady on, chap - Accrington aren't a bad watch at the moment!

A true digital warrior. I heard that in the U.S. AT&T has enabled Skype to work on their 3G network is this the same with your carrier?

This is why Panasonic (I think) is starting to add small cameras and Skype capabilities to their TVs. But yeah, good point.

The other interesting thing about that photo is that, from the perspective of the camera (and presumably your eyes), the size of the three screens is remarkably similar - and your iPhone is probably actually the biggest.

So maybe there's not that much difference between small screens and big screens after all?

Frankie - I have always thought this. I never understood why people worry about screen size. Surely it's all the same when you're looking at it?