Could train companies find a real use for hyper local reporting?

This is a thing now, isn't it?

As you would imagine the social networks were full of banter about snow and commuting. Being a bit of a boring wally I kept searching Twitter to see how that compared with the official information being given out. It was actually quite interesting.

Let's get the obvious out the way. The main train company websites were completely useless. So ill informed as to be totally redundant. This one just says the "live departure boards are currently unavailable". And look at the horrible vague language "most Southern services are currently suspended due to adverse weather conditions". And then they feel the need to tell you this is an important annoucement in words as well as a whopping great exclamation mark road sign thing. In, er, a yellow lozenge.

As a side note just look at that as an example of a 'digital strategy' gone wrong. Bookmark the site on StumbleUpon - tick! Share with your friends on Facebook - tick! 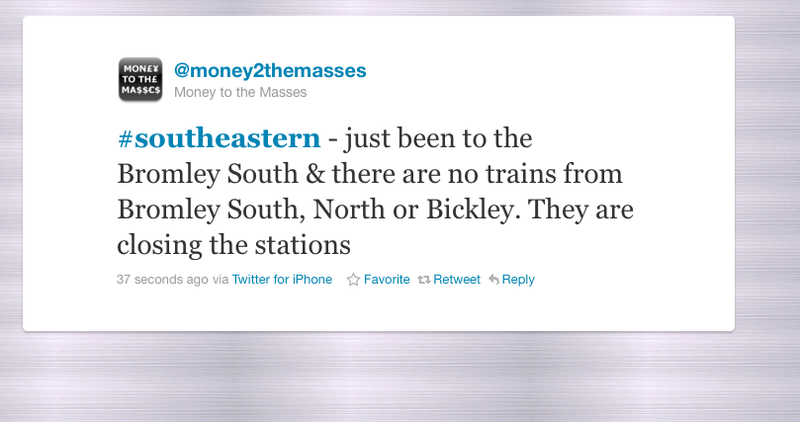 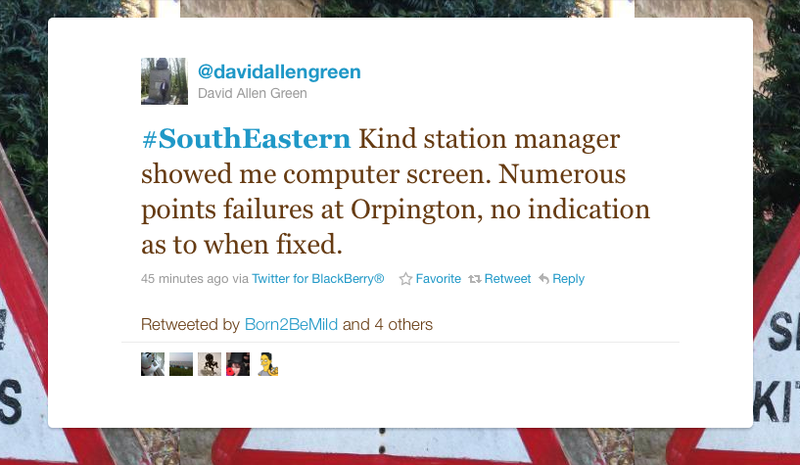 (And yes that's a different train company, but they were all acting the same. I was just doing random Twitter searches.)

That's really rich information. Genuinely helpful. Let's not forget that lots of Twitter is inaccurate and profane, but if you bypass that you get really useful stuff in there. It's really helpful to know that they've started closing stations, in someways more helpful than whether the stations are just open or closed. And it's one thing to tell you the station is "experiencing overcrowding" it's another to explain that Police are on the platforms to deal with overcrowding.

If I was smarter I could write something here about fuzzy states or something. Something clever about giving you information that's between an ON and an OFF state. Grey as oppossed to black and white. 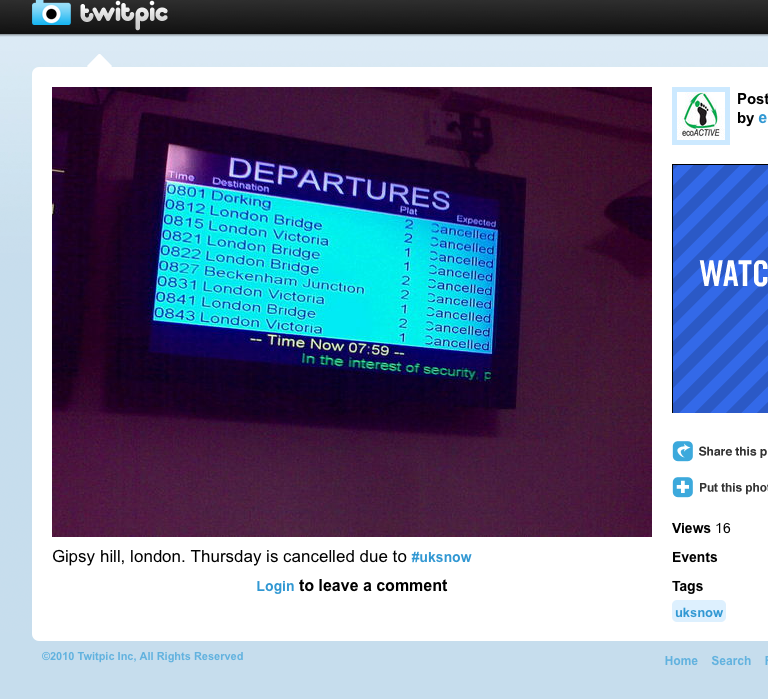 You also get pictures which add yet more depth. Some of these pictures even manage to add humour to a miserable situation. 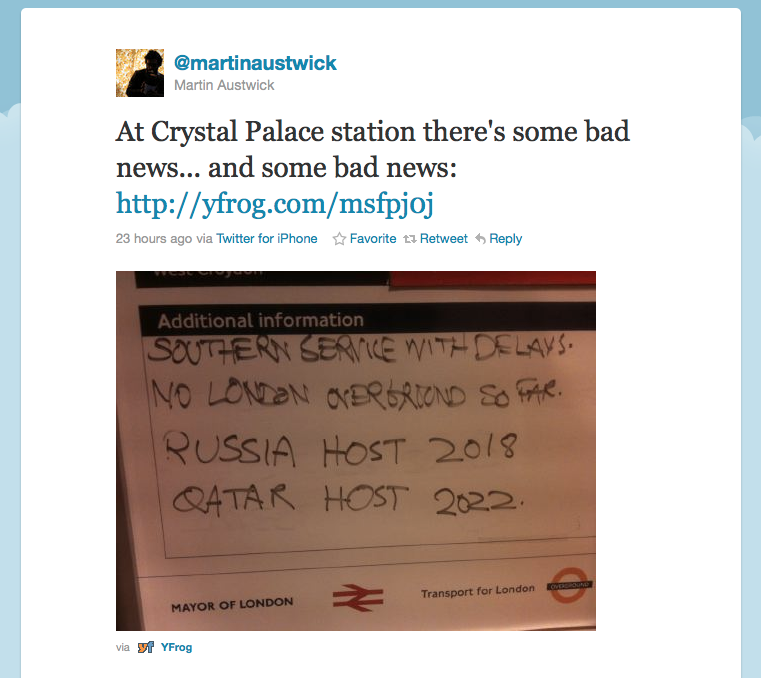 Here's another example which further highlights the gap between the information being given out and what is actually happening. 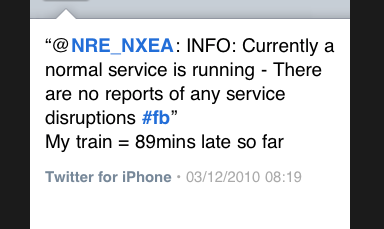 So why can't the train comapines provide richer information? Information that's greyer and fuzzier but more helpful for that. I guess it's (way) too much to ask them to just display tweets on days like this instead of their official, boilerplate info. (Yes I know most of it would just show swearing, but they could filter out certain keywords.) Maybe they could get someone to manually search and select tweets and twitpics to display?

They could actually find a genuinely helpful use for hyper local, citizen journalism style reporting.

Once again, I am reminded of this quote by Larry Page.

I found you could get better information from the BBC travel news about the trains than the train companies themselves.

Look at @LondonMidland over the past few days - like Southeastern a Govia franchise but the opposite end of the spectrum (although I must ask how we jumped from update 10 to update 13 today?). Concise simple statements, and honest facts.

Eurostar got a bit like this but calmed down and is now making short and sensible posts. The vacuum left by Southern and Southeastern has been filled by the excellent RT service - especially @_southeastern

Don't forget to mention the good move by South West Trains, who switched their website to a Snow Timetable menu - a clear map showing the services which would not be running, and set of basic core timetables which they by and large delivered as published. By withdrawing some trains and staff, they created a healthy contingency reserve to fill the holes where an incoming service was running late and thus cover those times where crews or trains are not in place to leave on time. The spare crews and trains were also available to run through the night keeping the lines clear, as the snow fell, and run every train to maximum length (ensuring there was more than one unit in a train, and thus if one unit failed a second was ready to keep the train moving.

Some folk did get it right but most never gave a peep on twitter or SMS networks Reckno we need to gather in the experiences for Savid Quarmby's review here....

I've always been impressed with thetrainline.com app for iPhone which does actually allow you tweet about trains and also pulls in tweets from anyone else by using specific hash codes for trains. It's very useful

Interesting observations Ben, and not exclusive to rail. I was meant to fly to Milan on Friday from a Gatwick closed the two days prior. The websites of both Gatwick and EasyJet offered unhelpful, non-commital updates once every few hours, whereas the twitter feeds of both provided clues and hints, though photographs and short snippets of info. While onlookers at Gatwick tweeted pictures of the progress of a de-icing runway.

The thing with all official status messages is that they're very rigid, only released at the eleventh hour when every ass of the company is covered to be sure that train or plane is, or isn't running. These often without justification or reason so the user still feels in the dark.

The nice thing about twitter is that the user can piece together data to make their own judgements; if the flight is still scheduled for two hours time, but in a twitpic you see four snowploughs on the runway you can make your own call.

On top of this, both companies did a good job of getting their tone on twitter just right. My Thursday night tweet prompting Gatwick to make a call on friday's flights "@Gatwick_Airport it's past 9. What's the verdict on tomorrow, i need to plan the hangover" got an immediate reply telling me and everyone else, they planned to open the following morning.

There's something in this.

(This said, EasyJet subsequently cancelled my flight and some Spaniards went on strike, so I never did get to Madrid)

Couldn't agree more Ben. Whilst South West Trains' website is slightly better than Southern's, their supposedly "live" updates on the revised timetable is grossly inaccurate. I checked my train, website said it was fine, hopped on a tube to Waterloo and 10mins later found it was cancelled. Maybe the site had updated? No, re-checked and the site still said it was running on time!

It became my understanding that the "live" timetable is updated once an hour and because of the short notice cancellations etc it remained accurate for only a matter of minutes, by which time it is too late.

Twitter updates from other commuters were extremely helpful there's no doubt about that, but the only true way I was able to get accurate info was from the staff at the stations. They were both accurate, and honest if they simply didn't know. I appreciated that.

This is something we're doing (albeit unofficially and in addition to officially-sourced info) on @uktrains and the 38 train operator-specific accounts that make it up.... See http://uktra.in

During major disruption or serious incidents we also scan the hashtags and RT what we can too.