Which one will I remember in ten years time? 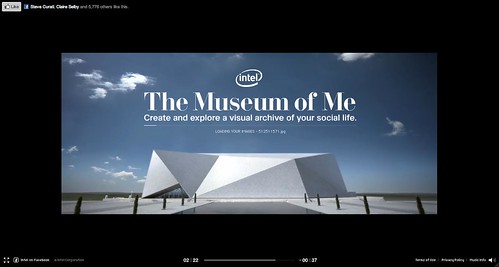 This flew around the internet the other day. There have been many things like this before but this one was a little better, a little prettier, a little quirkier. God knows what it's got to do with Intel, but anyway. You can make one here.

It's prompted me to write this post because last week this arrived in the post. You can make one of these here. 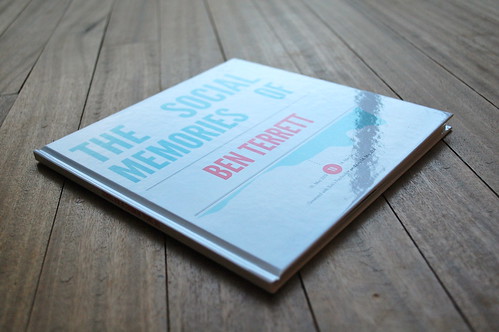 Essentially they are both the same idea. Both enabled via Facebook. Both take information from your profile and make a thing that's a bit creepy, a bit surprising and a bit engaging. 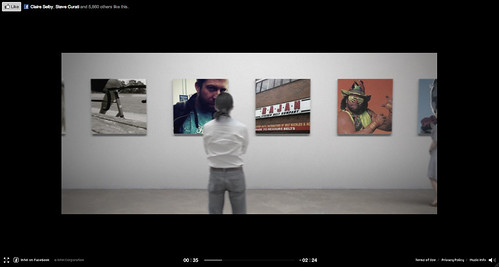 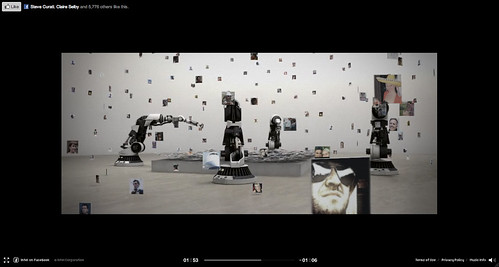 In many ways they fall down in the same areas. They are both slaves to the data they've been given. They make certain assumptions, that your best friends are the ones who comment the most, that your favourite pictures are the one with the most likes, that the person you have been tagged in photos with is a cherished friends. It's pretty close but a simple bit of human curation could weed out most of the problems these algorithms produce. 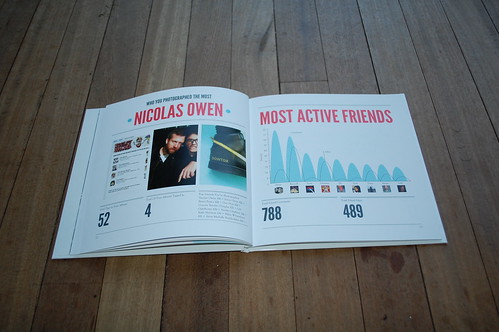 But there are no humans here, this is auto generated memory curation. It's a bit odd because of that. I went to college with Paul Stafford, nice bloke, reads this blog (Hi Paul) but I've probably seen him three times in the last 15 years. He uploaded a load of old university pictures and tagged a bunch of us, which makes him the person I'm tagged in the most photos with. Feels a little odd to have a whole page dedicated to this. 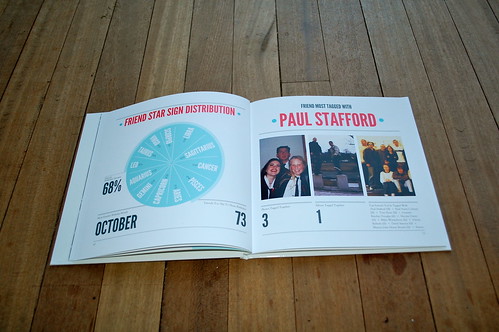 In the book version there are charts based on things they can easily chart. What we can visualise gets visualised. What day you do the most posting for example. Hardly insightful, hardly a memory. 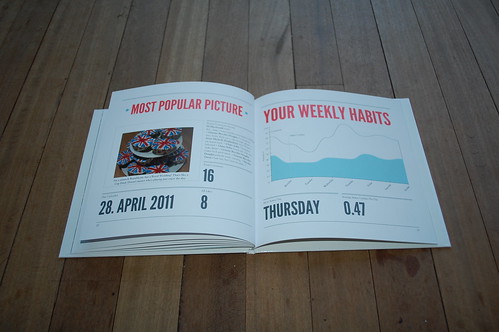 But! The point of this post is to tell you the difference between these two things.

When I saw the book (produced by Deutsche Post) I thought I'd get one because I'm obviously interested in taking digital content into a printable form. It's very easy to make, just one click from Facebook, it's 19 Euros, it arrived in two weeks. I asusmed it would be mildy interesting, that I'd show it in the office and then it would probably get recycled.

I was wrong. I'm actually really fond of it. I want to keep it.

The Intel thing, I can't even remember where it lives. I'm never going to do that again. 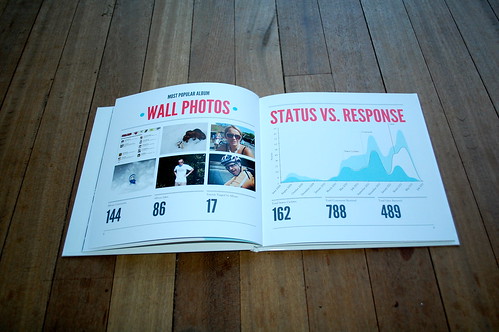 It has all the pitfalls you'd except. Random data, ropey typography, but's it's close enough to feel special. And it's worth remembering that to most people a thing, a personalised physical thing, will feel indistinguishable from magic.

More pictures of the book here and the website here.

My wife has a birthday at the end of the month, and at first glance this seemed a great idea for a present for her. However, it needs her permission to access her information, and with that it reserves the right to post to her Facebook page etc. Her permission is not mine to give away, and I don't want things posted to her homepage as it will give the birthday secret away.
I don't know how they would solve that problem, but it seems a missed opportunity. Presents are still best served by the well-presented artifact, rather than by the less tangible digital knick-knack, (a physical book versuses a kindle download, for example).

If the algorithm had somehow managed to produce a more accurate representation of you, I wonder if you would have been less pleased by it. Does the "amateurisahness" make it more acceptable?

Nice to see the design has been totally lifted (albeit in a poor way) from Nicholas Feltron.