I re-read this the other day and got a bit emotional. It generated more feedback than any other post this year. I wrote it in June. I still like it. Here it is, reproduced in full.

Some time ago Anthony Burrill very kindly gave me a print. This one. 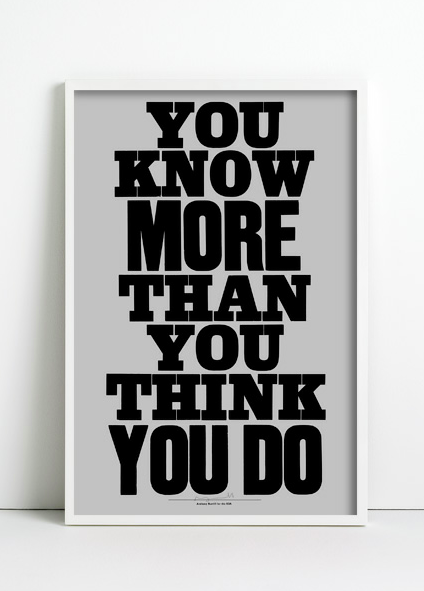 It's a lovely thing and I remember thinking, oooh that will go nicely in the space at the top of the landing. I intended to get it framed and hang it up. The weeks passed by and I started to worry about the message.

The top of our landing is a place the kids walk past every morning, the sun shines through the window and fills this space with light. This print, with it's bold, clear message would be unmissable. I started to worry that "you know more than you think you do" wasn't the right message for children, ages 0-7, to be faced with every morning.

Sure, I know what it's getting at. I understand the point it's making, but I'm not sure it's helpful advice to a three year old. A jaded 30 something adult - yes. A sponge like brain just starting school - not so much.

IT IS POSSIBLE I'M OVER THINKING THIS.

Yes, it is. I'm aware of that. But once a thought gets in your head, you can't let it go, can you? So I started thinking about what message I would like to greet my children every morning for the next 20 years or so. Tough brief.

I've been meaning to blog this next bit ever since I started blogging but have never got round to it. The Roald Dahl book, Danny Champion of the World has, I think, had a huge impact on my creative career. This passage has always stuck with me.

"Ours was just a small village school, a squat ugly red-brick building with no upstairs rooms at all. Above the front door was a big grey block of stone cemented into the brickwork, and on the stone it said, THIS SCHOOL WAS ERECTED IN 1902 TO COMMEMORATE THE CORONATION OF HISROYAL HIGHNESS KING EDWARD VII. I must have read that thing a thousand times. Every time I went in the door it hit me in the eye. I suppose that’s what it was there for. But it’s pretty boring to read the same old words over and over again, and

I often thought how nice it would be if they put something different up there every day, something really interesting.

My father would have done it for them beautifully. He could have written it with a bit of chalk on the smooth grey stone and each morning itwould have been something new. He would have said things like,

DID YOU KNOW THAT THE LITTLE YELLOW CLOVER BUTTERFLY OFTEN CARRIES HIS WIFE AROUND ON HIS BACK?

THE GUPPY HAS FUNNY HABITS. WHEN HE FALLS IN LOVE WITH ANOTHER GUPPY, HE BITES HER ON THE BOTTOM.

DID YOU KNOW THAT THE DEATH’S-HEAD MOTH CAN SQUEAK?

BIRDS HAVE ALMOST NOSENSE OF SMELL. BUT THEY HAVE GOOD EYESIGHT AND THEY LOVE RED COLOURS.THE FLOWERS THEY LIKE ARE RED AND YELLOW, BUT NEVER BLUE.

And perhaps another time he would get out his chalk and write,

SOME BEES HAVE TONGUES WHICH THEY CAN UNROLL UNTIL THEY ARE NEARLY TWICE AS LONG AS THE BEE ITSELF. THIS IS TO ALLOW THEM TO GATHER NECTAR FROM FLOWERS THAT HAVE VERY LONG NARROW OPENINGS.

I’LL BET YOU DIDN’T KNOW THAT IN SOME BIG ENGLISH COUNTRY HOUSES, THE BUTLER STILL HAS TO IRON THE MORNING NEWSPAPER BEFORE PUTTING IT ON HIS MASTER’S BREAKFAST-TABLE "

So that's the goal, right? "put something different up there every day, something really interesting."

But what that passage also does is demonstrate the significance of walking past a piece of seemingly meaningless text every day for years. You notice this stuff, it sinks in. So what would I want to sink in?

When we were kids we had a version of this poem on the kitchen wall. I say "a version" as I can't remember the words exactly and google has hundreds of different versions. But it went something like this.

If a child lives with criticism,
he learns to condemn.

If a child lives with hostility,
he learns to fight.

If a child lives with fear,
he learns to be apprehensive.

If a child lives with pity,
he learns to feel sorry for himself.

If a child lives with jealousy,
he learns to feel guilty.

If a child lives with encouragement,
he learns to be self-confident.

If a child lives with tolerance,
he learns to be patient.

If a child lives with praise,
he learns to be appreciative.

If a child lives with acceptance,
he learns to love.

If a child lives with approval,
he learns to like himself.

If a child lives with recognition,
he learns to have a goal.

If a child lives with fairness,
he learns what justice is.

If a child lives with honesty,
he learns what truth is.

If a child lives with sincerity,
he learns to have faith in himself and
those around him.

If a child lives with love,
he learns that the world is
a wonderful place to live in.

I've always liked the sentiment there. In my head I'd like to get that properly typeset and screen printed. It could be a beautiful thing in a nice frame somewhere. But it's too long, and the advertising creative director in me says you'd never read that from the top of the landing as you move down the stairs. It needs to be something simpler.

And so I thought about Jones's Get Excited and Make Things.

I love it's positivity. I like the fact it's a rallying cry rather than a hectoring statement. I love the warm vagueness to it. It's smiple, powerful, a nice way to start the day. Matt is a friend and it feels like an artifact of my time. So that was it. I had found a winner. Up it went.

"I must have read that thing a thousand times. Every time I went in the door it hit me in the eye. I suppose that’s what it was there for."

I can only hope. 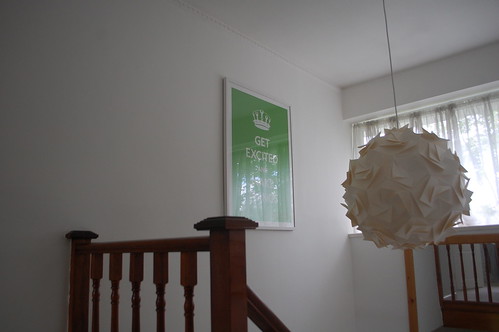