From Persuasion to Usability - Design Meets the Internet

In September I gave a talk at the RSA. I tried to sum up the things I've learned about design inside large organisations from my time in government. I spoke about process and how to make that more agile and about trust and how important it is to earn that and to give it to design teams.

Because the RSA did a good job of filming it you can watch the video of the talk below. Because I follow John Steel's method of presenting where you always write a talk in long hand you can read the transcript below.

The last time I was in this room was 18 years ago when I won the RSA Student Design Award. 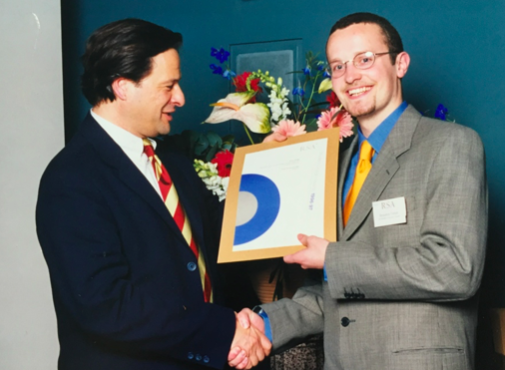 So it's an honour to be giving this talk tonight at the launch of the 2015 award scheme. I want to talk about how design has changed in those 17 years and the values design needs to thrive today.

I'm going to say design at it's best shares the same values as the internet at it's best. It's open, agile and designed around the user.

Design has fallen into the marketing trap of persuasion and it needs to get back to being about usability.

Some of you will think this is basically a form versus function debate which has been had many times before.

It's different to that. What has changed since 1997 is that the internet has come along.

And that has changed everything.

Since 1997, I've started two business. One, Newspaper Club which prints online content and is used by design students all over the world, was quite successful and got bought at the start of this year. I've worked at Wieden + Kennedy, an ad agency, with clients such as The Guardian and Nike. I'm currently also a Governor of the University of the Arts London and an advisor to the London Design Festival, which is on at the moment and I encourage you to visit one of the 400 events taking place this week. I studied graphic design at college and in my final year winning the RSA Student Award helped get my career started. In my first job my boss said, "to be honest all the designers were pretty similar but you'd won that award".

I'm the Director of Design at the Government Digital Service. I've been a civil servant for four years and that has been a privilege. But it's time to move on and I leave GDS at the end of the month.

I'd like to talk about some of things I've learned driving design in an organisation of close to 400,000 people.

The Government Digital Service is a team at the heart of government, building services so good people prefer to use them.

At the start of the Coalition government, Francis Maude, then Minister for the Cabinet Office, asked Martha Lane Fox to write a report on DirectGov. She wrote a brilliant report. It's insightful, pulls no punches and best of all - it's only a few pages long.

It boiled down to four things; create GDS, fix publishing, fix transactions, go wholesale. That led to the creation of GDS at the end of 2011.

They don't look happy because previously the UK government spent more on IT than any other country in Europe except Switzerland, although I think that included the cost of CERN.

We moved around 2,000 websites, all with different branding, different look and feel, different navigation and we made just one. GOV.UK.

We had some success. We on a D&AD black pencil which is an incredibly hard award to win as they don't give that prize ever year. In the category we won it was the first black pencil for 13 years. We won Design of the year beating the Shard and Thomas Heatherwick's amazing Olympic Cauldron.

Not everyone was pleased about this though. The Daily Mail called us boring.com. And commented that we had linked to such pages as "housing and local services." Outrageous.

More importantly than all of that. We made things better for users. 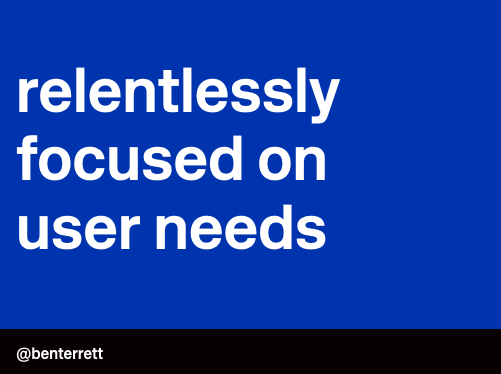 So how did we achieve that? And what role did design play? We focused relentlessly on user needs.

Very early on we wrote some design principles. Our first principle is to start with user needs, not government needs.

Here's a good example of how that changes how you think about design. An early version of the site featured these icons. They're rather beautiful. But in user research no-one knew what they meant. In fact some people thought the orange door, which to us represented a "guide" or a "manual" some people thought that was the exit door. And they clicked on it to try and leave the site.

So we got rid of them. And in typical GDS fashion, we just deleted them and the published a blog post about it. If we were managing a brand would we have been so brutal and focused? I doubt it.

This year is the 50th anniversary of Calvert and Kinear's road signs. There's an exhibition at the Design Museum as part of the London Design Festival. We use a version of the typeface they designed for the roadsigns, Transport, on GOV.UK. As the Daily Mail highlighted most of the site quite boring, it's just text and so typography becomes really important. Transport looks great but more importantly it tested really well. It's clear and easy to read.

No surprise really as it was designed to be read at 70mph, in the dark, in the rain. This is a picture of the original testing at an airport. We do it slightly differently now.

Here's Margaret with civil servants from all across government when we won Design of the Year.

Lots of you are thinking, this isn't design. This is UX. I don't like the term UX especially when it's used as a noun. Because it leads to people saying, "we'll stick two weeks of UX on the end of that" that will fix all the problems. It won't.

User experience is the responsibility of everyone. It has to be, because most of the time in organisations the biggest problem is fixing the things everyone knows are wrong and everyone knows the answer too. 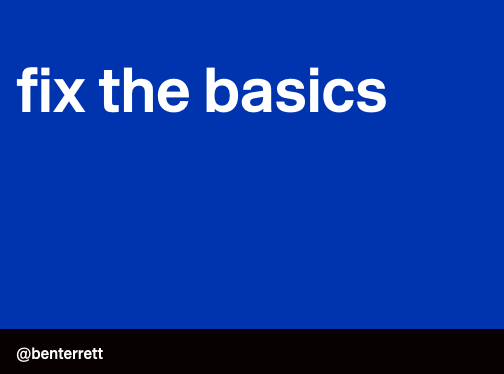 The most difficult task in organisations today is fixing the basics. And most businesses would gain a significant advantage over their competitors is they could just fix the basics.

There are thousands of examples of this. Here are a few I found. Verizon who sent a customer 53 letters to think them for choosing paperless billing.

The Channel 4 player that doesn't work when you plug your laptop into a TV.

And this one. Would you choose that seat? You know it's OK. You know the plane doesn't really look like that. But you'd still be nervous, wouldn't you. Too often people try an fix these problems with marketing. That's why you see jokes… social media accounts… it's persuasion not usability.

Being able to fix these problems but design firmly in the boardroom, which is where designers always say they want to be. But designers struggle with this.

And here's my pro tip. The CEO doesn't care about fonts. And nor should she. That's your job. If you enter the boardroom and say 'I can save you money, I can make your services easier to use' the CEO will be all ears. And then the CEO will trust you to choose the fonts.

In government now we have about 200 digital designers working as part of delivery teams on government services. In Swansea, Bristol, Preston and Newcastle - all over the country. This is a picture of Louise Downe speaking at our recent cross government design meeting at DWP in Leeds. Louise Downe is taking over from me next month. Many of you will know her, she's been at GDS just over a year and I know she'll do a fantastic job.

In agency speak my job is be Executive Creative Director of that talented bunch. But the traditional agency approach won't work in a large federated organisation spread all over the country with over 300 agencies. So we devolve power down the network and we empower people, just like the internet does.

The traditional Creative Director is a bottleneck. It's a waterfall process. 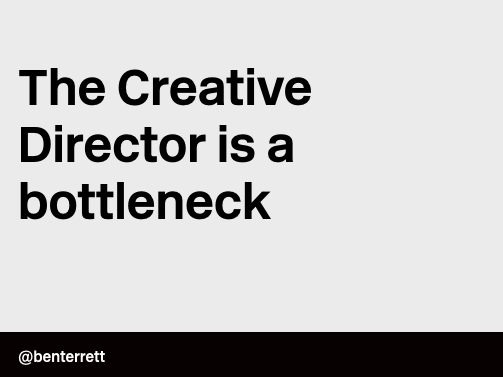 At GDS all the designers can code. They start by sketching, they move as quickly as possible to working code. GDS makes over 8 changes to GOV.UK every day, thousands of content changes, but around 8 code of design changes. 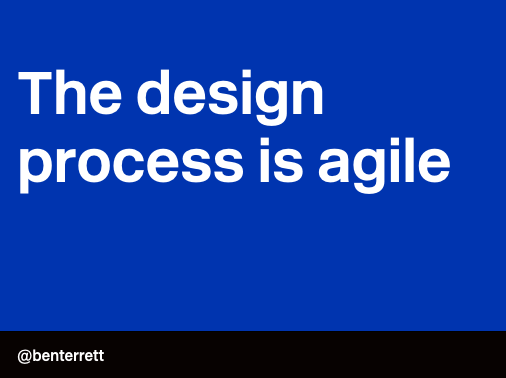 The design process is agile. Very few design teams are truly agile, even in big digital organisations that use agile to develop software.

This is how we describe agile. We're talking about software development but this could be applied to many processes. In fact, it feels like the traditional creative agency approach.

We're also open. We publish all our design patterns on GOV.UK. There's no brand guidelines PDF.

But before they go into the design patterns there's an active community discussing different designs on a wiki. Feeding in user research from all over government. When we're sure it works, it goes into the Design Patterns. 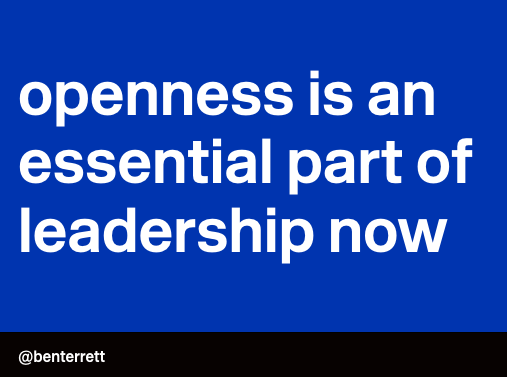 This openness is the only way to work on project of this scale. In my opinion openness is an essential element of leadership now.

And lots of ideas with strong leadership is better than one big idea.

The design industry has become obsessed with novelty and persuasion. The internet is forcing it to change. Focus on user needs. Concentrate on fixing the basics. Trust = delivery. Be agile. Be open.

Usability trumps persuasion and now is the time for the design industry to move back to that. Thank you. 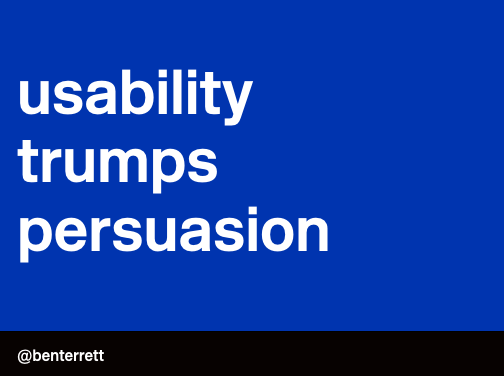 Thanks so much for posting that. Some clear and thoughtful thinking, as ever. Do you think branding is partly an attempt to "earn a reputation for things you're going to do" ?